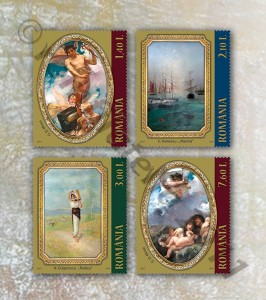 Nicolae Grigorescu (1838-1907) is considered to be the great master of the Romanian painting who illustrated in his works the symbiosis between the Realism of the Barbizon School, the Impressionism and the Symbolism.

In the period before his departure for Paris, he made religious paintings in Baicoi, Zamfira and Agapia Monasteries.

Starting with 1861, together with Auguste Renoir, he attended the workshop of Sébastien Cornu in Paris. Not very late after, he joined the Barbizon School where he perfected his pictorial education.

In 1873, he started having study visits to Rome, Naples, Pompei, then Greece and Austria, in Vienna. The influence of the Barbizon School is striking in the paintings made during these trips.

After 1890, the painter settled down in Romania and most of his paintings depict pastoral themes: peasants’ portraits, ox-carts, specific Romanian landscapes.

On the postage stamp with the face value of RON 3.00 is illustrated the master’s painting entitled Rodica. Painted in 1894, the composition presents a hot summer season landscape when people harvest the wheat. The main female character, who may be seen in the foreground of the painting, is a woman carrying a water vessel.

Nicolae Grigorescu was the first artist who was appointed member of the Romanian Academy.

On the postage stamp with the face value of RON 2.10 is illustrated the painting called Marine made by Eugeniu Voinescu (1842-1909). The painter studied literature and law in Cairo and Paris where he made friends with the Russian painter I.K. Aivazovski, a master of the marine landscape.

Between 1879-1888, Eugeniu Voinescu was the General Consul of Romania in Budapest, Constantinople and Odessa.

In 1889, he made his debut with a public exhibition at the Romanian Athenaeum Salon in Bucharest.
As a painter of marine themes, Voinescu was the most famous Romanian painter of his time.

We must mention that Grigorescu’s Rodica and Voinescu’s Marine are the most remarkable examples of monumental painting in Bucharest besides the mural paintings of the Romanian Athenaeum.

On the postage stamps with the face value of RON 1.40  and RON 7.60 are illustrated the allegoric compositions Mercury and Prometheus made by George Demetrescu Mirea (1852-1934). The painter studied at the Belle Arte School in Bucharest with Theodor Aman.

He took part in the War of independence (1877-1878) as an “frontline painter”, adjoining Nicolae Grigorescu, Carol Popp de Szatmary and Sava Hentia. In 1879, he obtained a scholarship in Paris in the class of Carolus Duran from École des Beaux Arts.

Between 1887 and 1888, he painted the ceiling of Vernescu’s House in Bucharest. In 1897, he was appointed the manager of the Belle Arte School in Bucharest, a position that he would hold until 1927.

Among the important works of the painter G.D. Mirea we mention the mural decorations from the National Bank of Romania and the Writers’ House in Bucharest, as well as those from the University of Iasi.

We kindly thank the National Bank of Romania for the documentary support offered in accomplishing this postage stamps issue. 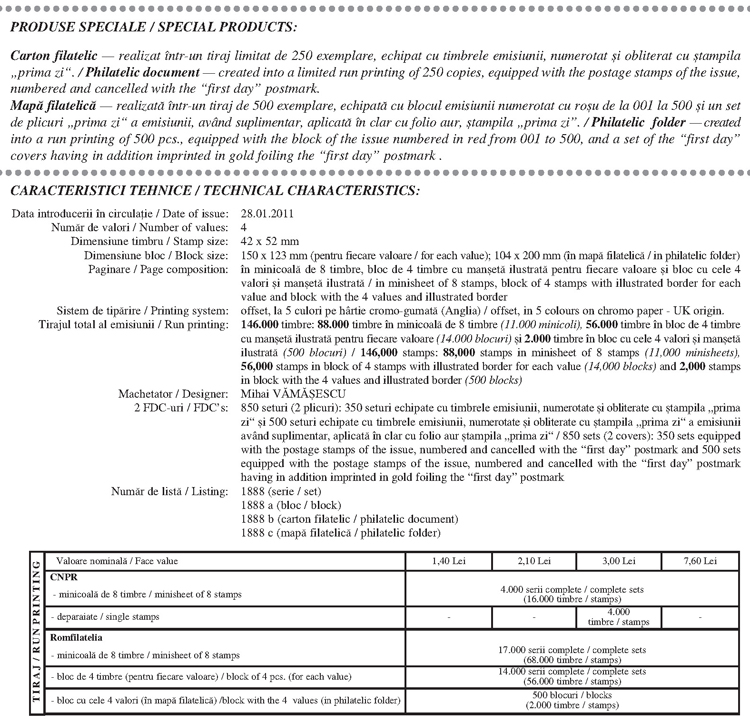