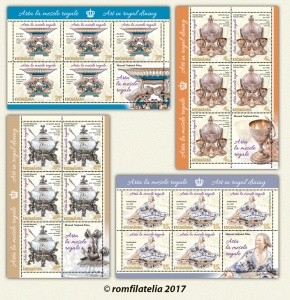 Romfilatelia introduces into circulation, on October 20th, the postage stamp issue “Art in royal dining”, that brings to the attention of the collectors the richness and grandeur of the past dining experiences.

There are collections of decorative art in the artistic patrimony of the Peles National Museum, which were once destined for the royal tables: silver and porcelain table services, glass services, cutlery, but also table sets for travel, useful during trips, royal hunts or picnics. These are true art objects made by fine metal-workers, glass-smiths, master potters and fine carpenter artists from the late 19th and early 20th centuries. They were made to order by major European and Eastern manufactures and are silent witnesses to the royal courts’ grandeur and to a bygone usage of polite society.

Impeccable tablecloths and napkins made of damask or silk were loaded with fine porcelain tableware, shiny crystal glasses, and silver cutlery.

At the Peles Castle, the meal was prepared in the basementkitchen, where the wine collection was located, and the platters were brought up with a lift to the level of the living room, located on the high ground floor of the castle.

The menus were written daily on sheets of white paper bearing the royal cypher. For special meals, with important guests, the menus were decorated with polychrome designs in pen, becoming small works of art and bearing the names of the culinary dishes in French, then considered the language of gastronomy.

Social games were played, after the meal, during the bygone dinners in Peles. The prize was a drive to Brasov with the Palace car.

A meal at the Royal House of Romania was characterised by fine taste, quality and refinement. Most of the past rules of protocol are also part of the ritual of the current royal dinners.

Guests awaited, according to protocol, for the king, queen and the princes to sit first at the table, and on departure, everyone stood when the king left the living room. During the meal, it was not advisable for anyone to leave their place. The conversation around the table began after a few words from the king.

The stamp with the face value of Lei 3.50 illustrates a fruit dish made at the Goody & Co. Minton workshop, from England, in the 19th century. The piece is made of hard paste porcelain, moulded in a pattern. This was later painted over the glaze and partially gold-plated with colloidal gold.

The stamp with the face value of Lei 4 depicts an egg service set for three people made in the Martin Hall & Co.workshop, in England, from silver-plated metal, with the silver spoons bearing the mark of Paul Telge workshop, from Germany. The piece, created in the 19th century, is engraved on the lid with the cypher of King Carol I of Romania.

The stamp with the face value of Lei 4.50 illustrates a punch bowl, Bambou model from the 19th century, made in the Baccarat glass workshop, in France, and the Wollenweber metal-works shop, from Munich, Germany. The crystal piece blown into a pattern was encased in silver, partially gold-plated, with a total height of 47 cm and a diameter of 38.5 cm.

The stamp with the face value of Lei 15 illustrates a candy dish created in the Meissen workshop from Germany, in the 19th century. The piece is made of porcelain modelled into a patterned and hand-painted. In order to decorate it, the piece was glazed and barbotine was used (a vitrifiable diluted paste with which ornaments on porcelain objects are stuck) as well as partially gold-plating the piece. The height of the candy dish is 20 cm and its width is 29 cm.

Romfilatelia thanks the Peles National Museum for their documentary support granted in the creation of this postage stamp issue. 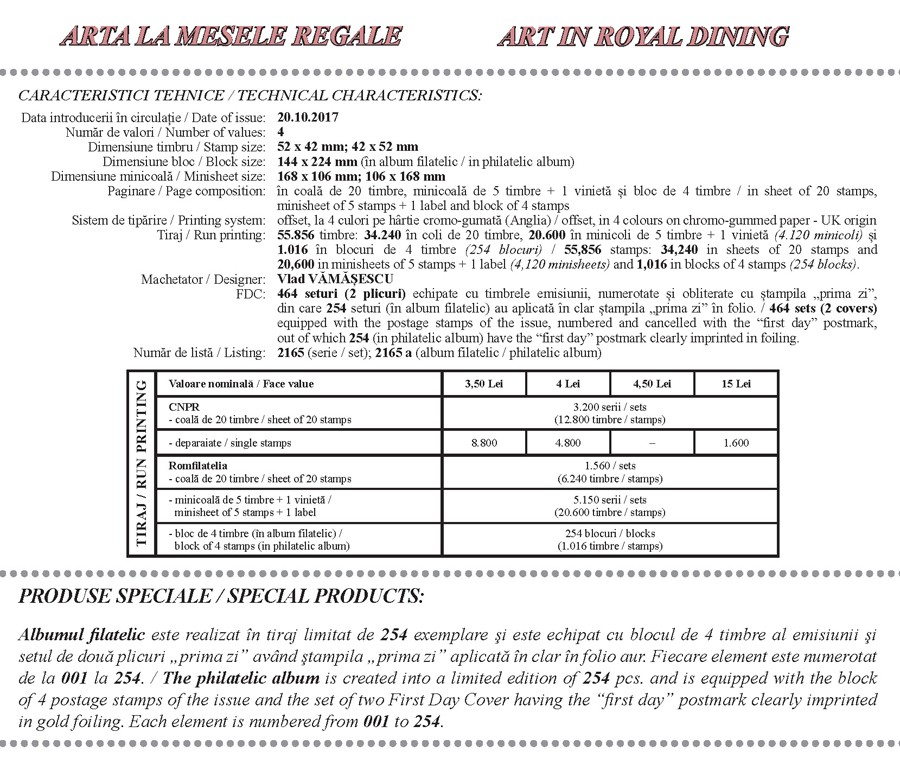