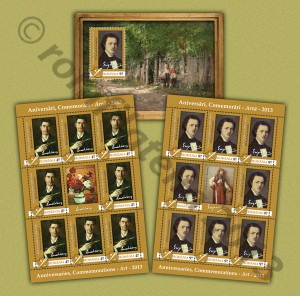 “Art is not what you see, but what you make others see.” – Edgar Degas

This year, on the occasion of the 175th anniversary of Nicolae Grigorescu’s birth and the 145th anniversary of Stefan Luchian’s birth, Romfilatelia introduces into circulation the postage stamps issue entitled Art – Anniversaries, Commemorations as an homage paid to these artistic personalities.

Stefan Luchian (1868 – 1916), also known as the plastic painter of flowers, graduated from the National Fine Arts School in 1889 and got the bronze medal for “Cap de expresie” (Headexpression) and “Studiu după natură” (Study after nature). In the same year he left forMunich and then forParis.

1896 is the year of his recognition since he was one of the main initiators of the Independent Artists’ Exhibition inBucharest.

In 1900, he participated with two pastels at the Universal Exhibition inParis. In the same year, the first manifestations of the disease appeared, tormenting him until his death – multiple sclerosis.

By the end of his life, Stefan Luchian started painting assiduously still lives with flowers concentrating all his passion for nature, life and beauty. Luchian’s “Flowers” have that solemn simplicity that makes them great masterpieces.

On the postage stamp with the face value of 4.50 lei, is illustrated the painting “Autoportret” (Self-portrait), a simple composition reflecting the ill tormented soul of the artist presented here as a creator.

Nicolae Grigorescu (1838 – 1907) is, along with Stefan Luchian and Ion Andreescu, one of the first founders of the Romanian modern painting.

In 1861 he left forParisat the Fine Arts School where he would meet Renoir. Then, atBarbizonhe improved his artistic education that would be later distinguished by paintings exhibited at the Universal Exhibition inParis(1867) and the Salon.

Between 1873 and 1874 he travelled for study toAustria,ItalyandGreece.

During the Independence War, he was present as a “battlefield painter” at Grivita, Smardan and Rahova, and the fights of the Romanian army would be immortalized in masterpieces of the Romanian painting that remained as genuine historical documents for the gaining of our state independence.

He worked a long period inFrance, mainly inBrittany, and between 1891 and 1904 he had personal exhibitions at the Romanian Athenaeum.

1899 is the year when Nicolae Grigorescu became an honorary member of theRomanianAcademy.

On the postage stamp with the face value of 9.10 lei, is illustrated the painting “Autoportret” (Self-portrait), an artwork from the artist’s youth, that he was very fond of and kept it in his workshop in Campina until his death.

The border of the souvenir sheet illustrates the painting “Fete lucrând la poartă” (Girls spinning at the gate), a vast composition, having as subject a popular tradition widely spread in the Romanian villages, but whose main character is the rich in vegetation landscape of the village’s alley, lighted by the strong sun’s rays.

We thank the National Art Museum of Romania for the support granted in the accomplishment of this postage stamps issue. 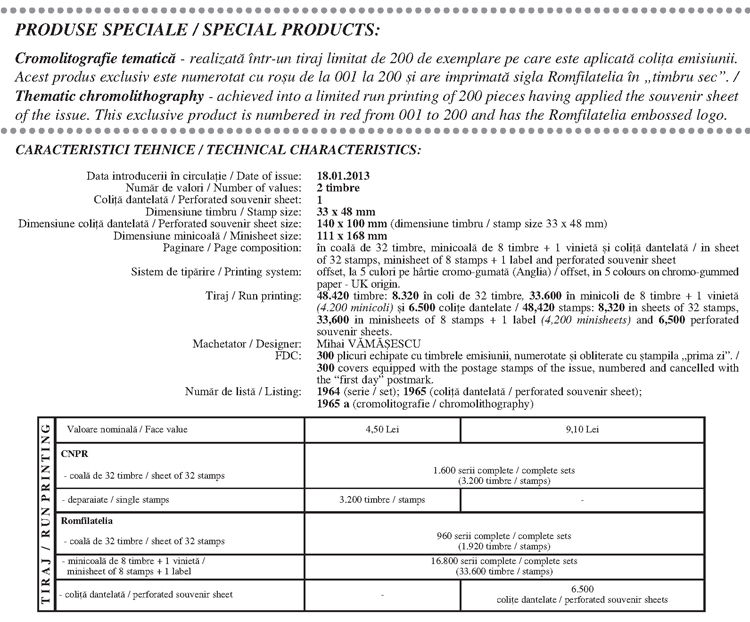