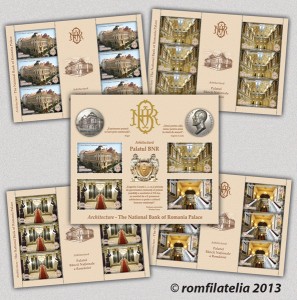 Wishing to promote one of the most representative buildings of the 19th century from Bucharest, a presence that clearly expresses both, the architectural style of the epoch and the prestige of the National Bank of Romania, Romfilatelia introduces into circulation the postage stamps issue Architecture, The National Bank of Romania Palace which set of four postage stamps reproduces images from inside and outside of NBR Palace from Lipscani Street.

The National Bank of Romania, a credit institution that has held ever since its creation the exclusive prerogative of banknote issuing, was set up on 17/29 April 1880.The economic and social importance of the activity carried out by the National Bank of Romania required the existence of one’s own premises that may define and express its identity in a strong and unique manner. Thus, in the period 1884-1889, at the core of the commercial area of Bucharest delimited by Lipscani, Smardan, Karageorgevici and Doamnei Streets, on the site of the largest inn from the city’s history, SerbanVoda inn, it was built The National Bank of Romania Palace.

The architectural project was entrusted to the French architects Marie-Joseph Cassien Bernard and Albert Galleron, and the construction works and interior decorations were coordinated by the architects Nicolae Cerchez and Constantin Baicoianu and supervised, on behalf of the bank’s Board of Directors, by Eugeniu Carada, the director of the institution, a remarkable personality of the time and one of the founders of the modern Romania.

On the postage stamp having the face value of 3.10 lei, is illustrated The National Bank of Romania Palace, namely, its main façade and the one from the West. The architecture of the edifice characterized by monumentality and a strong expressive force, is subordinated to the principles of an academic eclectic style. It takes many elements from the Renaissance and French Classicism architecture and is distinguished by the harmony of proportions, balance of volumes and decorations specific to the architecture of public European buildings of the time.

On the postage stamp having the face value of 3.60 lei is illustrated the Marble Hall, the former Counters Hall which hosts today theNBRMuseum.

The space has been developed on two levels. On the ground-floor, the central space is surrounded on three sides by a continuous gallery reserved at that time for the working area of the bank clerks. It was separated from the main area for the public by means of some wooden counters. On the superior level of the hall, there is a succession of void spaces and double columns. Above the cornice, the hall is decorated with a series of vegetal and figurative ornaments reminding of classical mythology.

The postage stamp having the face value of 4.50 lei illustrates the Main Hallway on the ground-floor ofNBRPalace.

Its role is one of distribution, a passage between the main entrance and the Marble Hall and the starting point of the two monumental staircases to the representation spaces of the building on the 1st floor.

The postage stamp having the face value of 4.70 lei represents one of the two Monumental Staircases placed symmetrically in relation with the longitudinal axis of the building ensuring the access to the 1st floor of the edifice.

The staircases start on the ground-floor from the Main Hallway in a single baluster, up to the intermediate stairhead from where they continue to the 1st floor with other two balusters, on each side of the first one delimitated in the interior by marble handrails.

We bring our thanks to the National Bank of Romania Board for the support granted in the accomplishment of this postage stamps issue. 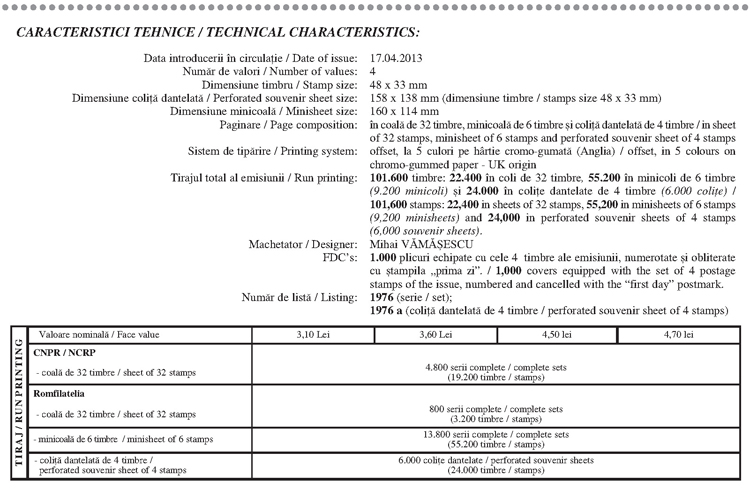