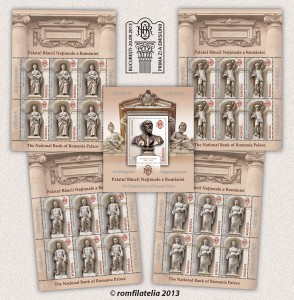 Continuing the promotion project of one of the most archetypal buildings of Bucharest, Romfilatelia introduces into circulation the postage stamps issue Architecture – The National Bank of Romania Palace (II) – Allegorical Statues, which series of four stamps and a souvenir sheet reproduce the images of the ornamental elements that highlight this imposing edifice.

The date of 31st March 1882 marked the endorsement of the contract regarding the execution of the blueprints for the building that was to become the National Bank ofRomaniaPalace. The French architects Albert Galleron and Cassien Bernard handed the final blueprints at the beginning of April 1883.

The crucial role in running all the activities related to the construction of the great edifice was played by Eugeniu Carada, “a living legend”, present in each of the establishing stages of the most important banking institution of Romania.

“By his wide knowledge and competence, his tireless activity and work, intelligence and practice, Eugeniu Carada contributed more than anyone else to the progress made by the National Bank of Romania and used all his powers to raise our institution to the place it holds”, as the text dedicated to Eugeniu Carada by the Board of Directors of the National Bank of Romania reads.

As director of the National Bank of Romania between 1883 and 1910, Eugeniu Carada was actively involved in the complex process of construction, being present, since 1884, when the cornerstone of the Palace was laid, to every stage of the materialization of the French architects’ projects.

As one of his biographers, Mihail Romascanu, says “Carada coordinated all the works with the skills of a great architect. He would order materials, analyse their quality, check the offer prices, reanalyze the blueprints, supervise the execution of works and ask for the re-execution of those that were not adequate; in short, nothing was done without his approval”.

As an acknowledgement of the special merits of the one who was the soul of modernizing the institution of the National Bank ofRomania, on 17th February 1924, a commemorative monument, placed in the corner of the Palace, at the crossroads ofLipscani StreetwithEugeniu Carada Street, was inaugurated. Carada’s bust was placed on a pedestal-platform decorated with bas-reliefs and allegorical figures. All the pieces were casted in bronze. The statuary group was created by the sculptor Ernest-Henri Dubois, the pedestal and the decorative bas-reliefs by the sculptor Dimitrie Mataoanu.

The statuary group was demolished by the communist regime in 1948. Today, on the former location, we may admire a wonderful replica of the group made by the sculptor Ioan Bolborea.

The allegorical characters, below Eugeniu Carada’s bust, seem to embody “recognition” for the charity acts of the one who represented the most famous personality of the banking world of his time (charity acts mainly focused on training poor young people) and “history”, which records his valuable deeds in its pages.

The main façade of the National Bank ofRomaniaPalace, made of Rusciuc stone, is highlighted both by the majestic height and by the special attention paid to the whole ornamentation. At every corner, the compact volume is marked by a square-shaped pavilion, having the aspect of a tower, conferring power and strength to the building.

The lateral spaces of these pavilions shelter four decorative statues made en ronde bosse which highlight the noble storey. The four sculptures are the works of Ion Georgescu (1856-1898) and Stefan Ionescu Valbudea (1859-1918), two of the most remarkable Romanian artists of the time, and illustrate four allegorical characters, namely Justice (Iustitia, the Roman goddess of Justice) and Agriculture (goddess Ceres for the Romans) placed sideways, and in the middle there is Commerce (god Mercury for the Romans) and Industry (god Vulcan for the Romans). Their symbolic significance underlines the assurance carried by the National Bank of Romania to support the national economy.

The central decorative element of the façade sustained by four slender Corinthian columns is ennobled by a sculptural group made of two characters (a man and a woman) framing the dormer where there is a clock. It is supposed that the author of this statuary group was the sculptor Athanasie Constantinescu. We may guess that the two allegorical characters might represent other two Roman deities: Minerva (the goddess of wisdom) and Apollo (the god of light and arts).

The postage stamps of the issue reproduce the images of the statues, as follows: lei 2.00 – Justice, lei 3.30 – Commerce, lei 3.60 – Industry and lei 4.50 – Agriculture. The postage stamp with the face value of lei 8.10 reproduced on the souvenir sheet of the issue presents the image of Eugeniu Carada’s bust from the statuary group made by the sculptor Ioan Bolborea.

We convey our thanks to the Board of the National Bank of Romania for the support granted in the accomplishment of this postage stamps issue.
Issue date: 2013-09-20 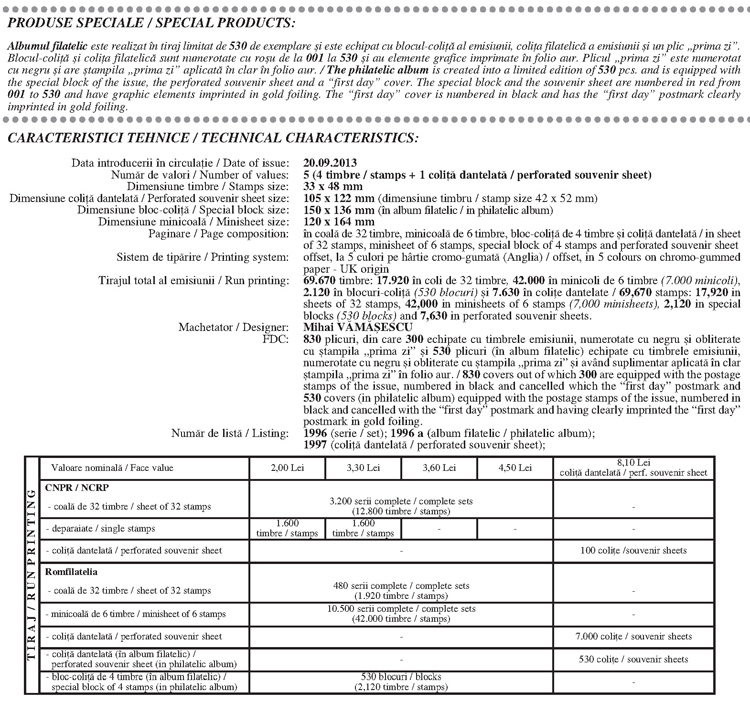