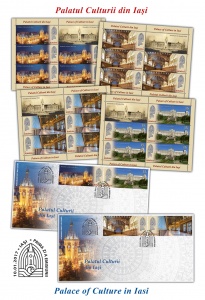 The stamp begins its journey for 2017 in one of the most beautiful cities of Romania – Iasi – an important cultural and historical heritage, where nearly 159 years ago appeared the first Romanian postage stamp, the famous Bull’s Head.

Thus, the first postage stamp issue of the year is dedicated to a true jewel of the architecture in Iasi, built between 1906 and 1925, by architect I.D. Berindey. This is the Palace of Culture in Iasi, located in the centre of the city, designed in the spirit of communal palaces in Western Europe and a fortunate combination of several architectural styles: Neo-Gothic, Romantic and Neo-Baroque.

Formerly known as the Palace of Justice and Administration, the construction impressed by its beauty and monumentality, imposing by its large size, and today is an iconic building of the architecture of Moldavia’s old capital and a genuine cultural effigy of the city, which we invite you to discover in the philatelic project Palace of Culture in Iasi.

Consisting of four stamps, the issue is available starting with Tuesday, January 10th, 2017, in all Romfilatelia shops from Bucharest, Bacau, Brasov, Cluj-Napoca, Iasi and Timisoara.

The stamp with the face value of lei 2.20 illustrates the palace’s façade. Due to its 55 meters high, reached through the central tower, the palace was considered to be the tallest building in the city at the time. Beyond architecture, the Palace of Culture’s clock tower has particularly contributed to the fame of the building by reminding of the clock installed in the gate tower of the Royal Court, in 1728, which have the city its rhythms for a long time.

Voivode hall, the most beautiful and monumental room of the palace, is found on the stamp with the face value of lei 2.50. The room is located upstairs and its name is due to a famous gallery of portraits of the rulers of Moldavia, starting from Decebalus, Emperors Traian and Aurelian, going into the forefathers of the medieval Moldavian state and continuing the series of rulers up to King Carol II.

During the time the building in Iasi was Palace of Justice and Administration, the “Henri Coanda” room, illustrated on the stamp with the face value of lei 8, was intended as a Jurors Court. The stucco at the top of the hall is the work of Emil Wilhelm August von Becker, sculptor of the Royal House of Romania and the hall’s ceiling was inspired from the Westminster Hall in London, where the Parliament of the United Kingdom was born. The central location and special decorations underline the outstanding significance of the room.

In 1955, the old Palace of Justice became the Palace of Culture, its image reproduced on the stamp with the face value of lei 15.00, hosting some of the most important cultural institutions of the country, united today under the name the “Moldavia” National Museum Complex in Iasi, which includes four national rank museums: Museum of the History of Moldavia, the “Stefan Procopiu” Museum of Science and Technology, the Ethnographic Museum of Moldavia, the Art Museum, as well as the Research and Conservation – Restoration Centre of Cultural Heritage.

Romfilatelia thanks the “Moldavia” National Museum Complex in Iasi for their documentary support granted in the creation of this postage stamp issue.