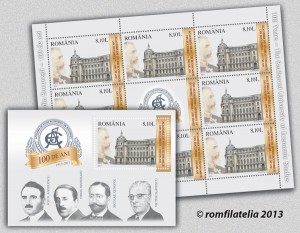 One century ago, the initiative of a group of young economists strongly sustained by the Minister of Industry and Commerce, A.D. Xenopol, came true when, on 6 April 1913, by a Royal Decree, they set up the first economic higher education institution of Romania: the Academy of High Commercial and Industrial Studies.

Confronted with serious material issues starting with the lack of their own edifice, the newly legalized institution had to fight the thwarting attitude of the other academic institutions which refused to acknowledge its statute.

Subordinated for two decades to the Ministry of Industry and Commerce, it managed to eliminate step by step all obstacles that delayed the materialization of the desideratum of real and visible assertion of the institution.

It was finally acknowledged and confirmed as an academic institution, it was allowed to hold doctoral exams (1921), it received for use the palace edifice built between 1924-1926 on the current location from Piata Romana, it benefited from a teaching staff that contained great personalities in domain: Anton Davidoglu, Stanislas Cihoski, I. N. Angelescu, Ion Raducanu, Virgil Madgearu, Victor Slavescu, Constantin Bungentianu, Andrei Radulescu, Gheorghe Tasca (Minister of Industry and Commerce – 1932) and Nicolae Iorga.

Over the years many changes of denomination took place and since the academic year 1967-1968, the denomination of the institution became the Bucharest University of Economic Studies, a denomination that has been kept until today.

The palace edifice where B.U.E.S. carries out its activity, made as an assembly of two buildings, was built according to the blueprints of architects Grigore Cerchez, Edmond Van Saanen Algi and Arghir Culina.

The reception and conference aula, the most representative room of the edifice, presents, by the arrangement of chairs (240 on the ground floor and 270 at the balcony),a spectacular amphitheatre completed with large loges perfectly adapted to the most demanding organization requirements of conferences and courses.

The other spaces for courses, labs, library and the diverse didactic and student activities are generous well fitted and organized by giving the entire space which occupies a surface of more than 3,000 m2(the footprint of the edifice) a prestige unanimously recognized as a high class academic environment.

The 100 years of existence of the prestigious economic higher education institution represents, besides the history of the Romanian economics, an important contribution to the instruction of tens of generations of economists among whom outstanding personalities internationally acknowledged stood out.

On the 100th anniversary of the Bucharest University of Economic Studies (B.U.E.S.), Romfilatelia introduces into circulation a postage stamps issue dedicated to this event.

On the stamp having the face value of 8.10 lei, is illustrated the Palace of the Bucharest University of Economic Studies next to the portrait of King Carol I, by whose decree this education institution was founded and on the souvenir sheet are represented prominent personalities in the history of the institution: Ion N. Angelescu, Virgil Madgearu, Nicolae Xenopol, and Victor Slavescu.

We thank the Bucharest University of Economic Studies for its support granted in the accomplishment of this postage stamps issue. 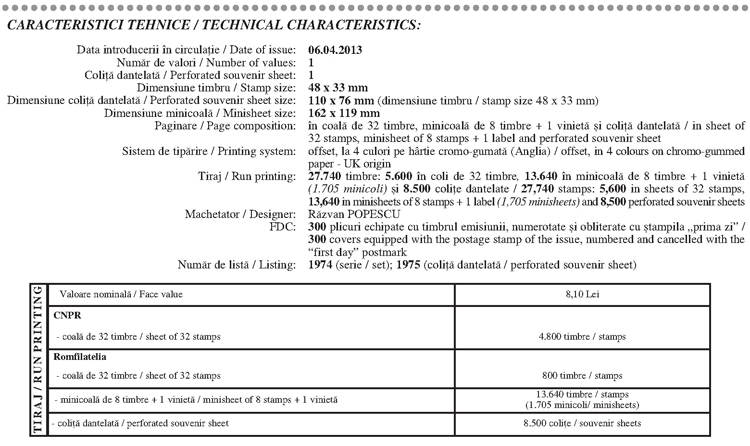