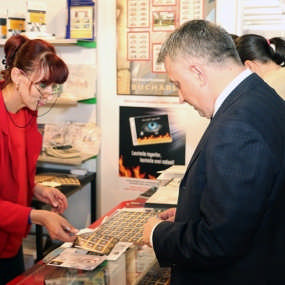 On Friday, October 20th, 2015, Romfilatelia released the postage stamp issue Angels tears, a pious gesture of sympathy and solidarity for the victims of the tragedy that took place in the Colectiv club.

Therefore, the presentation of the humanitarian philatelic project took place in the presence of
Mrs. Ligia Deca, State Counselor at the Education and Research Department within the Presidential Administration, Mr. Marius Bostan, Minister of Communications and Information Society, Mr. Adrian Curaj, Minister of National Education and Scientific Research, Professor Dr. Ioan Lascar, Head of the Plastic Surgery and Reconstruction Microsurgery Clinic within the Floreasca Hospital, Mr. Ovidiu Miculescu, President General Director of the Romanian Radio Broadcasting Company, but also in the presence of the mass media agents and visitors of the book fair.

The moderator of the event was Mrs. Cristina Popescu, Romfilatelias CEO, who began the series of speeches, stating that the stamp is a means of education among young people and population, being always alongside the most important events.

The philatelic elements of the postage stamp issue Angels tears reflect, in a suggestive image and sensitive graphics, our homage for the suffering caused by the tragedy that has occurred. It is a duty and an honour to be close, through the postal messages, to the victims of the fire from the Colectiv club, the CEOcontinued.

Mrs. Ligia Deca strengthened the meaning of the stamp as a silent witness of the events, stating: A postage stamp issue marks a moment, an event. In our case I believed it marked a social message. This postage stamp issue does nothing but ensure the recollection over the years. I dont know if you have collected stamps in your childhood, I have, and I know exactly how much I learned from the events that appeared on them. I wish for the same thing to happen next and the children, the ones who take the messages further on, to fully understand this event at its real proportion and value.

Mr. Minister Marius Bostan talked about the perception of the stamps in the communist age, but also about the importance of a humanitarian postage stamp issue, in the current national context: Before 89, the stamps were for me the window through which I went outside the country, because you couldnt travel at that moment. [] This limited edition has and will have a great significance. The value of these stamps will grow because it reflects a moment in Romanias history and I have faith that this moment will be an outstanding one.

The Minister Adrian Curaj also emphasized the importance of the stamp in the educational environment: The emotions make it hard for me to speak, the emotion of the fact that my students have also been affected by this tragedy and I was thinking that sometimes the voice shows something about the value of the emotions that we must share. And if we have learned again these days it was the idea of solidarity. And solidarity is on one hand an emotion space, and on the other I am convinced that we can express it and I believe that every child, out of those who will have access, will have in their house a stamp, a collection of stamps, because it is the stamps that will say over the years that the Romanian school system develops characters, develops citizens.

The professor dr. Ioan Lascar thanked the Romfilatelias team for turning a thought into a fact, confirming this idea through a few statements: Of course the humanitarian spirit marks an entire society, and the modern society possesses the instruments able to turn a thought into a fact. There are only a few days since I found out about this intention and this intention has become reality, and this reality allows our patients to be the current and future beneficiaries of the financial and creative effort made in this purpose.

Mr. Ovidiu Miculescu drew a parallel between the two cultural and educational promoting institutions – Romfilatelia and Radio Romania: There is a very strong resemblance between Radio Romania and Romfilatelia. One records the historic moment audio and the other one records it visual. Both records happen on special occasions, they both stand in time and the value of both grows in time. Of course, Radio Romania, through its 15 channels it manages, will promote this action of Romfilatelia, which, I name exceptional, and we do not do this only because there is a partnership between our institutions. We do this because we feel it and we are convinced that this must be done beyond written or understood partnerships. At the same time, I believe it is highly important that this kind of ideas, which are put into practice fast and properly, to be indeed supported quickly and seriously by a lot of people.

In the final part of the event, Mrs. Cristina Popescu, Romfilatelias CEO, thanked the partners who have supported the humanitarian philatelic project and addressed to everyone present the urge to join the campaign of the Romanian stamp, silent witness and spokesman of clear and strong message for support and help.