The postage stamps of the new issue come to complete the ones from last year and reproduce four new types of coins which can be found within the coin hoards of the numismatic collection of NBR: Dacian silver coins, Roman imperial gold coins, Polish silver coins and Dutch ducats.

On the stamp with the face value of lei 2.00 are presented the Dacian silver coins. Because the intrinsic value of the Geto-Dacian silver coins has afterwards dropped and the common metal alloy became predominant, in the first century BC the representations that appeared on these coins were already mere rendering, not preserving elements of inscription or key features of the original representations. A coin hoard discovered in Bukovina can be found in the NBR’s numismatic collection, consisting of the Husi-Vovriesti type coins, which date back to the 3rd century BC and whose main feature is the presence of the reverse cuts.

Roman imperial gold coins are illustrated on the stamp with the face value of lei 2.40. The Pitesti coin hoard, composed of gold coins from the time of Emperor Gordian III and found in the numismatic collection of the NBR, is the largest hoard of aurei discovered so far in Romania.

The Dutch ducat is represented on the stamp with the face value of lei 8.10. Within the numismatic collection of the NBR is kept a coin hoard dating back to the first half of the 19th century, found in the Mihaiesti village, the Hodoroceni commune (Suceava County), consisting largely of Dutch ducats, together with Venetian ducats and various Ottoman coins.

Polish silver coins are reproduced on the stamp with the face value of lei 14.50. Within the numismatic collection of the NBR several monetary deposits are kept, consisting of Polish silver coins from the 16th-17th centuries, discovered especially in Moldavia.

The four postage stamps of the issue are completed by a first day cover, while as page composition were used the sheet of 32 stamps, the minisheet of 6 stamps + 6 labels + 2 TABS and the block of
4 stamps + 4 labels (in philatelic album).

The special product is the philatelic album, created into a limited edition of 245 pcs. and equipped with the block of 4 postage stamps of the issue, with graphic elements in gold foiling, and the
first day cover of the issue, having the “first day” postmark clearly imprinted in gold foiling. Both products are numbered in black from 001 to 245.

Romfilatelia thanks the Issue, Treasury and Cash Management Department within the National Bank of Romania for the documentary and photographic support granted in the accomplishment of this postage stamp issue. 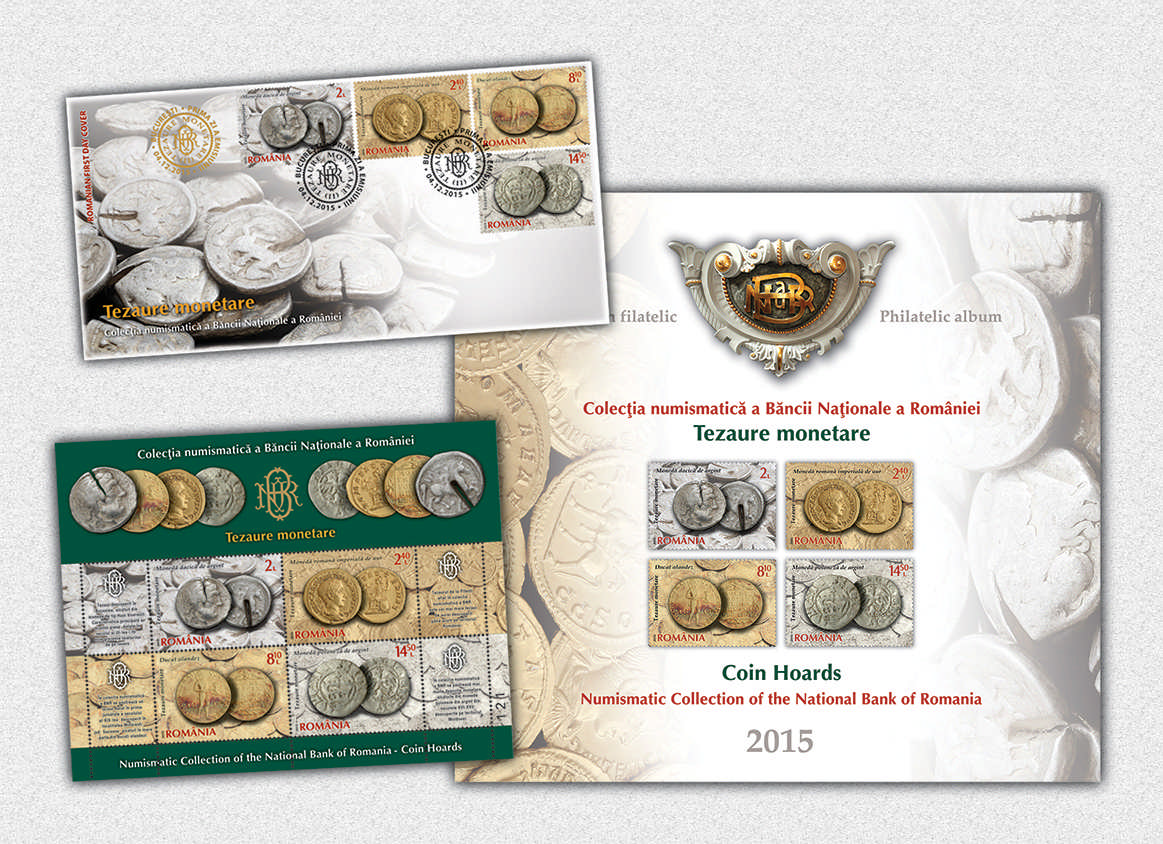