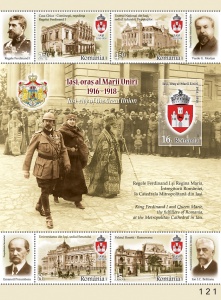 At the end of 1916, for a period of two years, Iasi became the capital of the Romanian Kingdom.The Council of Ministers and the Parliament at that time adopted here important decisions establishing the consolidation of the Romanian unitary national state and passed reforming laws for the development of our country, such as the electoral law that introduced the universal vote and the agrarian law.

Today, one century since Iasi was registered as a historic milestone of Romania, we could say that the former capital of Moldavia was the cradle of the Unions and the birthplace of Romania as a whole.

The city and its people, by tenacity, faith and sacrifices, brought back the hope of returning normality and achieving an old ideal: the Great Romania, bringing Northern Bucovina, Bessarabia and Transylvania to the borders.

One hundred years since those thrilling moments of our national history, Romfilatelia introduces into circulation an issue of thematic postal stamps under the name of Iasi, City of the Great Union, comprising of 5 values, 4 stamps and a perforated souvenir sheet reproducing pictures of symbolic monuments of the city, witnessing the governing of the country between 1916 and 1918 and in the preparation of the Great Union from 1918.

This issue is available starting on Wednesday, April 26th 2017, in Romfilatelia shops from Bucharest, Bacau, Brasov, Cluj-Napoca, Iasi and Timisoara.  The stamp with the face of lei 2.50 is illustrated the Ghica – Comanesti House. In 1916, the house was the headquarters of a major bank, Urban Financial Credit. One of the most beautiful buildings of the city, it was the residence of King Ferdinand I and also served as residence in 1859 – 1863 for Alexandru Ioan Cuza.

The National Theatre in Iasi is represented on the stamp with the face value of lei 4.50. The building has provided space for the House of Representatives. In the same hall, spectators’ applause echoed for the Iasi artists who, even in wartime, tried to maintain confidence and optimism through the force of art.

The stamp with the perforated souvenir sheet  with the face value of lei 16 reproduces the coat of arms of Iasi, bordered in a cinematographical image, picturing King Ferdinand I and Queen Marie, the makers of United Romania, along with Pimen, the Metropolitan of Moldavia.

In sepia color, the images illustrated on the stamps try to remake the atmosphere of that age.

This issue is completed by a set of two first day covers and as page composition were used the sheet of 32 stamps, minisheet of 6 stamps + 3 labels, set blocks of 4 stamps and imperforated souvenir sheet (in philatelic album).

The philatelic album is created in a limited run of 245 pieces and is equipped with the full series block (which include the souvenir sheet) and the set of First Day Covers, having the “first day” postmark clearly imprinted in gold foiling. Each element is numbered from 001 to 245.

Romfilatelia thanks the Romanian Parliament for the documentary support granted in the creation of this postage stamp issue. We would also like to thank Mr. Nicolae – Sorin Margarit for the photographic given support.