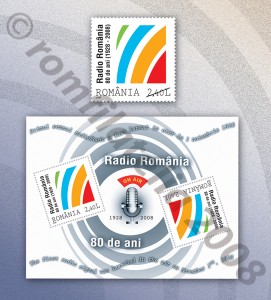 “ATTENTION EVERYONE! YOU ARE LISTENING TO RADIO BUCHAREST! …”
These were the first words broadcasted in Bucharest, on the evening of November 1st, 1928, at 9 PM sharp…”Radiophony… it is by far the most
extensive and vivid national school”.
(Dimitri Gusti)

“ATTENTION EVERYONE! YOU ARE LISTENING TO RADIO BUCHAREST! …”
These were the first words broadcasted in Bucharest, on the evening of November 1st, 1928, at 9 PM sharp…
“This is Radio Bucharest!”- just four words that translated from the hard work of tens of people, some of them unknown to the general public, others solely acknowledged through their broadcasted voices.
Names such as Margareta Marinescu, Puia Vasilescu Rebreanu, Aurora Balaceanu, Nadia Stefanescu, or Radu Vasilescu, are just some from the long list of the Romanian radiophony´s pioneers whose voice resounded in the tinny wooden boxes from Romanians´ houses at the time.
George Carnu Munteanu and Dragomir Hurmuzescu are the names of the first General Manager, respectively the first President of the Romanian Radio Broadcasting Society, the latter having been followed by Dimitrie Gusti.
Let us not forget nor the name of the person that had the honor to broadcast the first radio show, Professor Dragomir Hurmuzescu, neither the name of Horia Furtuna, the writer that had the honor to read “A New Soul” at the microphone, poem especially written for the inaugural moment.
The years have elapsed… The number of broadcasting hours has ever since increased constantly from 305 in 1928 to over 3500 in 1934. The illustrious voices of the Romanian culture have made their way to the microphones of the Romanian Radio Broadcasting Society. Concerts, theatrical shows, political, economic, international and sport events, interviews, men of culture but equally historical events that marked the last century (the Act of 23rd August, 1944, the forced abdication of His Majesty King Michael I of Romania, the events of December 1989), broadcasted live from the radio stations located in General Berthelot Street.
After 1989, historical turning point of the Romanian society and return to the true assets of democracy and freedom of opinion as well as rediscovery of the true cultural values of the country, the Romanian Radio Broadcasting Society marked a revival and a sudden change through its broadcasted promptitude and the objectiveness of its radio programs.
Currently, through its 24 hours a day radio broadcasting program, through the various stations it has (News Bulletins, Cultural, Musical, Regional Network Studios, The antenna of the Villages, International, 3 Net), Radio Romania is a constant book of knowledge for all, an inseparable link between the past, the present and the general radio public.
Since 80 years, “This is Bucharest, Romania!” has not only been signal to the open air but equally a gate towards the Universe.
In order to celebrate the 80 years since the launch of the first Romanian radio station, Romfilatelia introduces into circulation the postage stamps issue “80 Years of existence – The Romanian Radio Broadcasting Society”. The philatelic issue was brought to life with the help of the Romanian Radio Broadcasting Society. 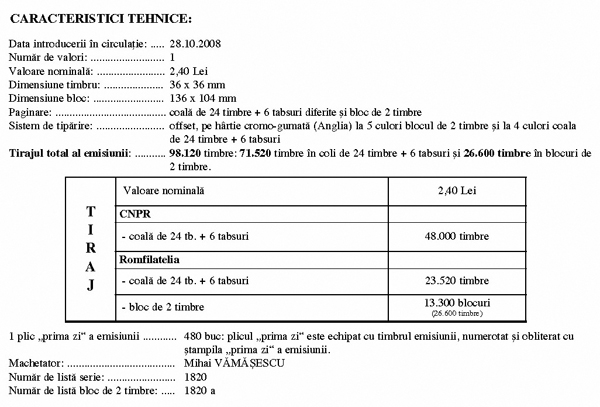