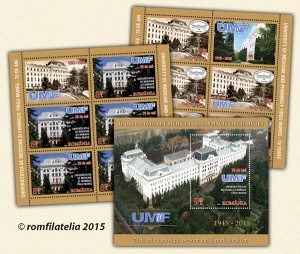 Bringing to the publics attention one of the most prestigious and emblematic symbols of the city of Tirgu Mures, Romfilatelia celebrates the 70th anniversary of the University of Medicine and Pharmacy Tirgu Mures, through a anniversary philatelic issue.
Over the last decades, many generations of medical doctors and pharmacists accomplished their studies in Tirgu Mures, the excellent results recorded in their professional activity making Tirgu Mures a landmark city for the medical education in Romania. At the same time, as a result of the high quality of medico-pharmaceutical education in Tirgu Mures, the University became a real academic brand for the city, one of its most famous and appreciated symbols.
Tirgu Mures is an old, traditional academic city, with a touch of history present at every step. The building that hosts the University was built between 1906 and 1907 by the city hall, after a project designed by Grünwald brothers, in the secession style. At the beginning, the building hosted a military school, being officially inaugurated on October 5th, 1909. Medical education in Tirgu Mures began in 1945, when the Faculty of Medicine was founded as a branch of the Bolyai University (currently Babes Bolyai) of Cluj Napoca, being located in the building of the former Military School. In 1948, after the Education Reform, this was transformed into the Medical and Pharmaceutical Institute of Tirgu Mures, having the following faculties: Faculty of General Medicine, Faculty of Pediatry, Faculty of Hygiene, Faculty of Stomatology and Faculty of Pharmacy.
In 1991, the Institute was given the name of University of Medicine and Pharmacy Tirgu Mures, with the Faculty of General Medicine, Faculty of Dental Medicine and Faculty of Pharmacy.
To these was also added a department of Military Medicine, which was re-introduced in 1990. Starting with 1965, the University gained the right to award doctoral degrees, moment which represented the start of the actual PhD School, providing students since then with excellent conditions for high level doctoral research.
Situated on a hill that overlooks the city, the imposing building offers a unique perspective of the city.
A dendrological park that surrounds the University on all sides protects it from the effervescence of the town as an island of perfectly integrated greenery.
Hidden from the eyes of the passersby, the University laboratories(located in the main building as well as in the annex ones) are a surprising shift from the external beauty of the building that has the emblem of time, to the dynamic reality of the twenty-first century technology.
Modern buildings, such as the Faculty of Pharmacy and the Center of Advanced Medical and Pharmaceutical Research, are designed to provide excellent learning facilities and highest standard innovative research infrastructure for both the students and the teaching staff, in a special architectural complex. A vast sports base is added to all of these – two modern sports facilities, lighted tennis courts and football fields, a gym hall, a large swimming pool and the University Sports Club. All these make the University an institution with facilities unique of this kind in Romania.
On the occasion of the 70thanniversary since its foundation, there will be organized a series of events aiming to disseminate academic values and to strengthen the role of the university in the academic, cultural and social life of the community. Medical national and international conferences, new scientific journals, closure of a time capsule, sport competitions, the launch of the anniversary postage stamp issue, a book festival, numerous cultural events, and many others, are representative examples of activities that will be organized under the auspices of this unique moment UMF 70, represented by celebration of 70 years of existence.
The two postage stamps of the issue reproduce the Universitys building, in different periods of its existence, with their respective logos.
The souvenir sheet represents a contemporary, aerial image of the building, allowing for a better visibility of its architecture. 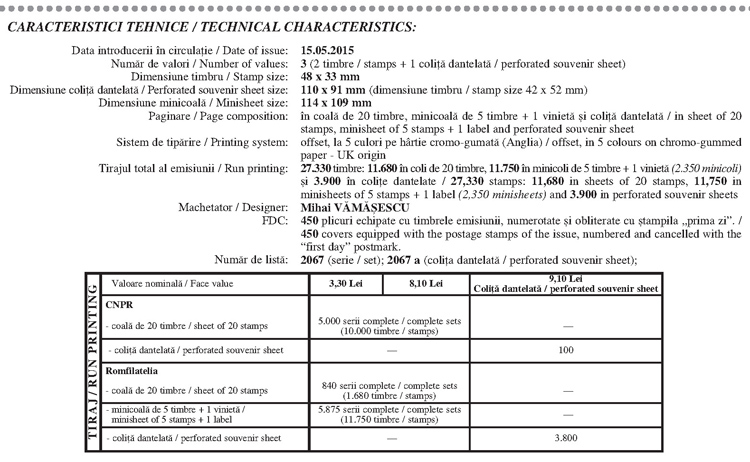