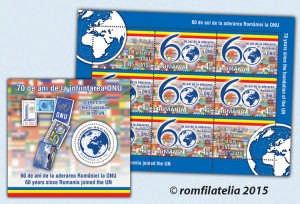 In 2015, the United Nations celebrates 70 years since its foundation, through the coming into force of the UN Charter, on October 24th, 1945, and 60 years since Romania joined the organization. On this occasion, Romfilatelia introduces into circulation the postage stamp issue celebrating these two events.

The UN was created as a project for maintaining peace and preventing new global conflicts, reflecting the vision of the victorious allies of the Second World War. Romania was admitted to the organization under a resolution of the UN General Assembly on December 14th, 1955.

Romanias accession was significant in itself as a means of affirmation on the international scene given that until then Romania had been in the shadows of the Iron Curtain.

After its accession to the UN, the first step for Romania was to explore the political context and the existing possibilities for promoting national interests.

Romanias proactive attitude and openness towards relations with Western countries had positive results, such as obtaining the Chairmanship of the General Assembly for the 1967/68 session. It was for the first time when a representative of the socialist group attainted this position, even ahead of some founding members. In addition, Romania was well represented within the secretariats of UN institutions.

In 1974, Romania hosted the World Population Conference, a prestigious predecessor of high-level Conferences from the 1990s. Bucharest also hosted the most prestigious UNESCO institution outside France, the European Centre for Higher Education.

After 1989 Romanias profile and actions at the UN radically changed.

During the 1990s the UN became a key provider of technical assistance for Romania, focusing on priority areas transformation such as economy, underprivileged children, environment protection, supporting democratic institutions, education and so on.

The nature of Romanias contribution to UN activities also changed. In 1991, for the first time in its history, Romania contributed with troops to UN peacekeeping operations. The involvement peak was reached in 1996, when Romania was ranked the 10th most important UN contributor. This was an important argument backing Romanias application to join NATO.

In 2000, for the first time in its history at the UN, Romania was able to pass an important initiative, not only for the consolidation of its new profile at a multilateral level, but also for the UN agenda as such, by means of the Resolution Promoting and Consolidating Democracy (2000), adopted successively by the Human Rights Committee and the General Assembly.

The decision of the International Court of Justice in the case regarding the maritime delimitation in the Black Sea (2009) is the most important event in the history of relations between Romania and the UN system.

This decision is not only the most direct and explicit use of the UN system to serve Romanias national interest, but it also reveals many of the topics promoted by Romanian diplomats at the UN: regional cooperation, observing international law, peaceful resolution of disputes, as well as the role the UN plays for small and medium-sized states.

Romfilatelia thanks the Ministry of Foreign Affairs for the support granted in the creation of this postage stamp issue. 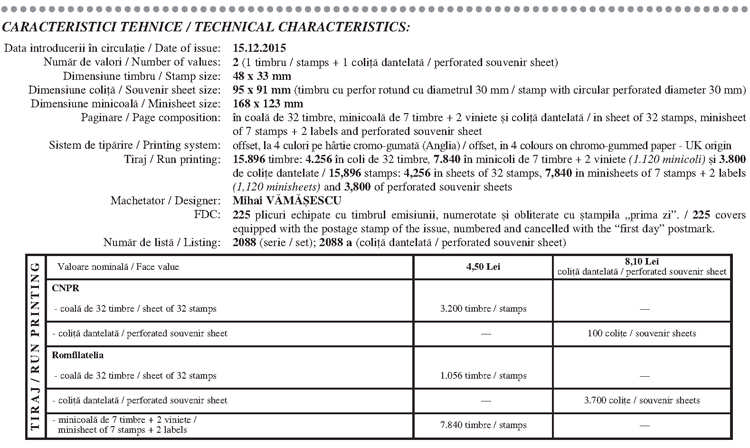