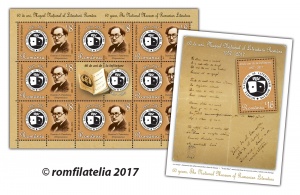 The National Museum of Romanian Literature houses an authentic literary treasure consisting of manuscripts, books, personal objects, artistic works, photographs, audio – video recordings that reproduce the depth and complexity of the whole art of the word in Romanian literature. Through these, the National Museum of Romanian Literature is also a true guardian of the Romanian language, the strength of our nation’s identity.

At the anniversary celebration, Romfilatelia joins the “Word’s Museum”, dedicating it a postage stamp issue consisting of a stamp and a perforated souvenir sheet.

The existence and mission of the National Museum of Romanian Literature were perceived, up to a point, as an activity dedicated to the research and exploitation of Eminescu’s work. During the last two decades, the mission of preserving the literary heritage and capitalising on it has become clearer, so that the National Museum of Romanian Literature asserted itself as a depositing-institution of old and modern Romanian literature, as well as an outpost of contemporary creativity. Its mission is to promote Romanian literature internally and internationally, to integrate it into the European cultural values through the preservation, development, research and capitalisation on heritage.

The issue’s stamp, with the face value of Lei 8, is dedicated to the founder of the museum, Dumitru Panaitescu Perpessicius, a poet with a very special tenure, but especially a first-rate literary historian.

In 1954 he received the State Prize for the elaboration of the critical edition of Mihai Eminescu’s works. Our literary history has had the chance to find in Perpessicius the deeply analytical and passionate editor of the monumental edition of Eminescu’s Opera.

On the stamp of the perforated souvenir sheet of the issue, with the face value of Lei 16, the logo of the National Museum of Romanian Literature is represented, made by Mircia Dumitrescu, which, through the graphic approach, figuratively renders the symbolism of Romanian literature.

The background of the souvenir sheet presents a page which showcases for posterity the handwriting of the great poet Mihai Eminescu and some stanzas from the poem To the star, which is found in the Archive of the National Literary Museum and ranked in its Heritage. The poem was published on October 25th, 1886 in Romania libera.

Romfilatelia thanks the National Museum of Romanian Literature for the documentary support given for the creation of this postage stamp issue. 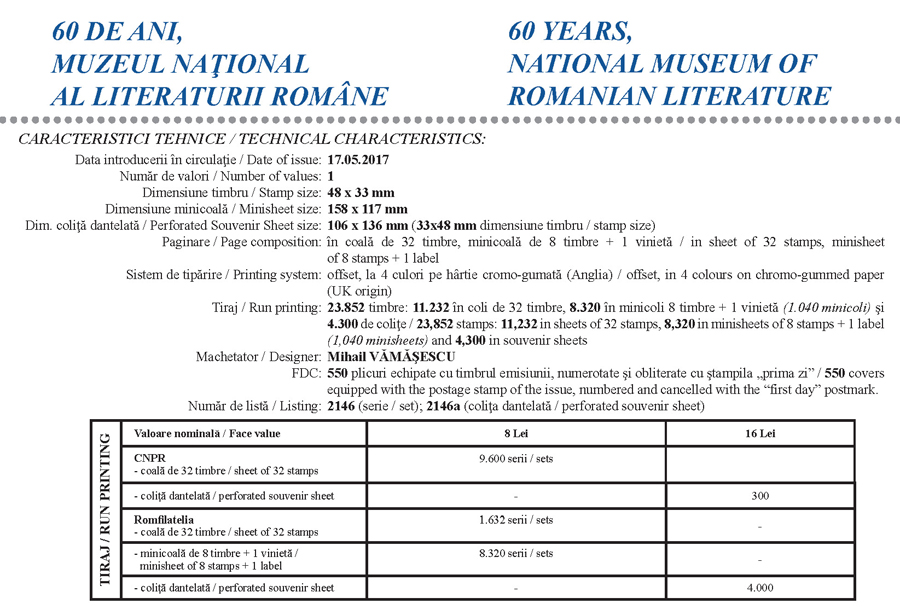