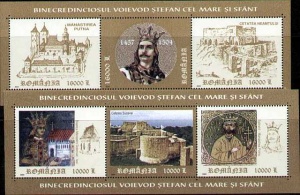 Stephen the Great and Saint was ruler of Moldavia between 1457 and 1504. He carried many wars defending his country and the whole Christendom. For his actions he was named Christs athlete. Faithful Voivode Stephen build over 40 churches and monasteries, helped and rose many monasteries on the Holy Mountain Athos and in various countries, being the greatest ruler in Moldavia who build so many holy places. Among his best achievements in monasteries, he build Putna (1470), Voronet (1488), Rasboieni (1496), Neamt (1497), Dobrovat (1504).