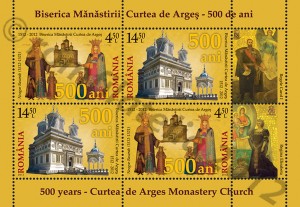 Considered in 1654 as “one of the world’s wonders” by the Christian Arabian writer and traveller Paul of Aleppo, Curtea de Arges Monastery Church was built by the ruler Neagoe Basarab between 1512-1517, on the foundations of the Metropolitan Cathedral built by Vlad II Dracul, the father of Vlad Tepes, which was “demolished and unreinforced”.

One of the most beautiful popular legends connected to the name of Curtea de Arges Monastery is “The Legend of Master Manole”, which went round the world.

They say that Negru Voda brought skillful masters to build the religious house, but everything they were building during the day came down at night. One night, Master Manole dreamt that the first wife of a master who would come to bring them food had to be walled in for the walls to resist. The next day, the first who came was Ana, Manole’s pregnant wife, and he had to wall her in on the southern side.

When the construction was ready, Negru Voda, impressed with the beauty of the monastery ordered his servants to take away the ladders leading to the roof so that the masters could no longer go down to build another more beautiful church, as they had boasted. Then, they decided to make wooden wings to fly down on the ground. But they fell down one after the other and on the place where Manole felt a spring appeared of which they say it represents Master’s tears. This is in close vicinity of the Monastery.

The church is 26 m long, 15 m wide and 31 m high. From the architectonic viewpoint, it belongs to the Byzantine style and the decorative elements at the exterior were influenced by the Arabian, Persian and Armenian art

The narthex, which is a part of the construction, is separated from the nave by a doorway mounted between two columns.

In front of the church entrance and the 12-step stairs there is an open holy water font supported on four columns made of marble of different nuances and geometric shapes.

The interior painting was made and finished by painter Dobromir of Targoviste in 1526.

The church with the “Dedication Day” consacrated to the “Assumption of the Virgin Mary” was sanctified in August 1517, in the presence of Kir Theolipt, the Patriarch of Constantinople, accompanied by a group of bishops, priests together with the Abbot of the monasteries on the Holy Mount Athos and the Metropolitan Bishop of Wallachia, Macarie.

Over the years, the church was subjected to many restoration works.

The last radical restoration was carried out in the second half of the 19th century by the French architect André Lecomte du Noüy and the Romanian architect Nicolae Gabrielescu.

The walls of the church were decorated with paintings made by the French masters F. Nicolle, Ch. Renouard and the Romanian painter N. Constantinescu of Curtea de Arges. The group of 12 columns representing the 12 Apostles is also impressive.

The chapel of the monastery hosts the relics of Saint Filofteia. You can also find here the Gospel painted and written in gold letters by Queen Elisabeth illustrating scenes from the Passion Week.

On the western façade of the edifice there are four inscriptions: the ones on the right side of the entrance are written in ancient Paleoslavonic in the time of Neagoe Basarab, and the ones on the left side date back to the period of restorations made by Serban Cantacuzino (1682) and Carol I (1886).

The narthex of Curtea de Arges Monastery is considered to be the Royal Necropolis of Romania, since the remains of the Kings Carol I, Ferdinand and Queens Elisabeth and Marie lie here next to those of the previous voivodes.

We thank the Archbishopric of Arges and Muscel for the assistance granted in the accomplishment of this postage stamps issue.
Issue date: 2012-10-12 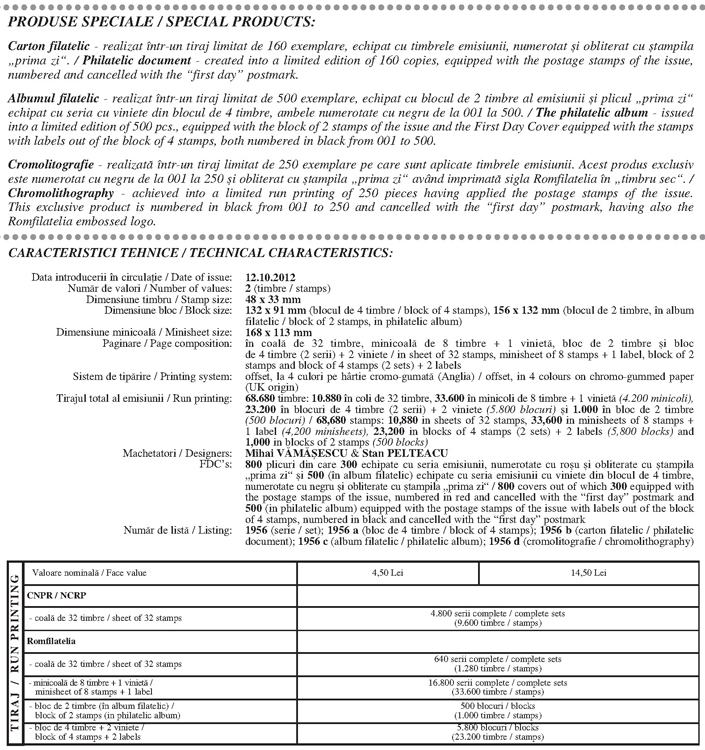