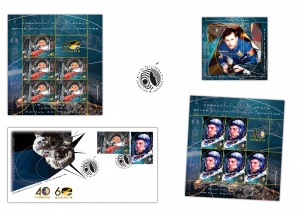 Romfilatelia invites you to discover, through the postage stamps issue Space Exploration. Anniversaries, the space odyssey in which Dumitru-Dorin Prunariu, on 14th May 1981, and Yuri Gagarin, on 12th April 1961, took part.

Presence in extra-terrestrial space can cause strange manifestations, from distorted thinking to strange feelings of disorientation.

As he headed for the established area of the orbital flight, cosmonaut Gherman Titov had the impression that his body was rotating through the air. “I suddenly felt like I was going head over heels and then I was flying with my feet up”, he said later. In reality, there is no rolling – the feeling was simply an illusion.

For many astronauts, these sensations tend to disappear after a few days in space, but others suffer from disturbing feelings throughout their journey. “I knew I was standing… and yet I felt upside down, despite the fact that everything was normally oriented around me” – this is how an astronaut described his experience aboard the Spacelab space station.

Trying to illustrate the phenomenon of “spatial disorientation”, the graphics of the Space exploration. Anniversaries postage stamps issue, introduced into circulation by Romfilatelia on May 14th, 2021, aims to suggest to the viewer the feeling of weightlessness felt by cosmonauts.

The postage stamp issue, which includes two stamps, an imperforated souvenir sheet and a “first day” cover, celebrates the 60th anniversary of man’s first flight into space (Yuri Gagarin, April 12th, 1961) and 40 years since the first space trip in which a Romanian cosmonaut – Dumitru-Dorin Prunariu – took part (May 14th, 1981).

The second stamp of the Space exploration. Anniversaries postage stamps issue, with the face value of RON 19.50, illustrates Dumitru-Dorin Prunariu in a cosmonaut suit, details from the technical plans of the Soiuz rocket and the 40th anniversary (Prunariu) logo.

Born on September 27th, 1952, in Brașov, Dumitru-Dorin Prunariu graduated in 1976 from the Polytechnic University of Bucharest, specializing in Aeronautical Engineering. In 1978, he was selected for the Intercosmos programme, a space flight training programme, and between May 14th and 22nd, 1981, he participated, along with the Russian cosmonaut Leonid Ivanovich Popov, in a space flight aboard the Soyuz 40 spacecraft and spent a week aboard the Salyut 6 Orbital Complex, conducting a series of scientific experiments.

The souvenir sheet of the Space exploration. Anniversaries postage stamps issue, with the face value of RON 31.50, illustrates in a stylized manner the first Romanian cosmonaut, Dumitru-Dorin Prunariu, in a suggested state of weightlessness, floating aboard the Soyuz 40-Salyut 6-Soyuz T4 orbital complex, with his camera.

The technical drawing in the background reproduces details of the technical plans of the Soyuz rocket and of the Soyuz 40-Salyut 6-Soyuz T4 orbital complex, on board which the Romanian cosmonaut carried out his activity for 7 days, 20 hours, 41 minutes and 52 seconds. Along with the simulated perforation that suggests space orbits, one can find the official anniversary logo of the Romanian cosmonaut – 40 (years) Prunariu.

In addition to the compositional elements described above of each stamp, the borders of the minisheets depict the Earth seen at night from the space. In the lower right corner, thematic collectors will have the joy of finding the silhouette of the American STS-1 (Space Transportation System-1) Columbia spacecraft, which made its first flight 40 years ago on April 12th, 1981.

In the same spirit of “space disorientation”, knowing that “there is no up and down in the space”, the illustration of the first day envelope of the postage stamps issue shows an astronaut during EVA (Extravehicular Activity), along with the two anniversary logos – 40 (years) Prunariu and 60 (years) Gagarin.

The image of the “first day” postmark of the postage stamps issue contains stylized space elements, the profile of a cosmonaut, a celestial body, cosmic orbits and the symbol of a rocket in the form of a space vector, an element often found in the logos of many space agencies.

The postage stamps issue “Space exploration. Anniversaries” will be available on Friday,  May 14th 2021, in Romfilatelia’s shops network in Bucharest, Bacau, Brasov, Cluj-Napoca, Iasi and Timisoara and online on https://romfilatelia.ro/store/.

The postage stamps issue is completed by a “first day” cover, sheet of 32 stamps and minisheet of 5 stamps + 1 label. 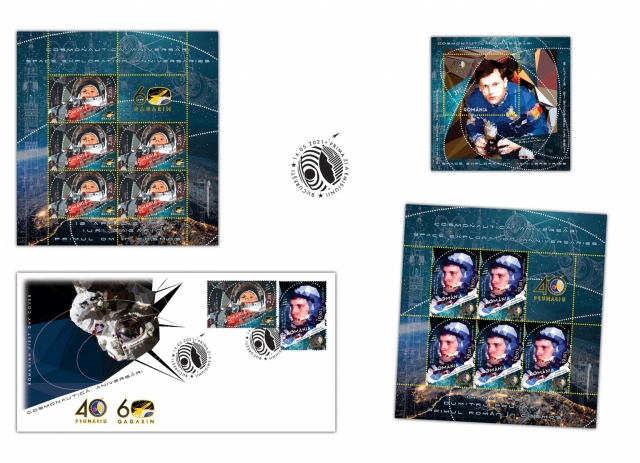 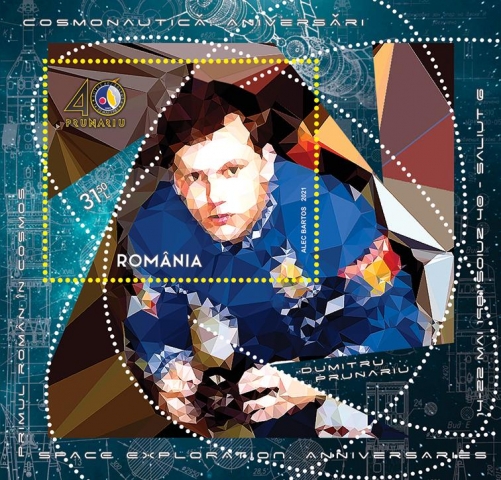 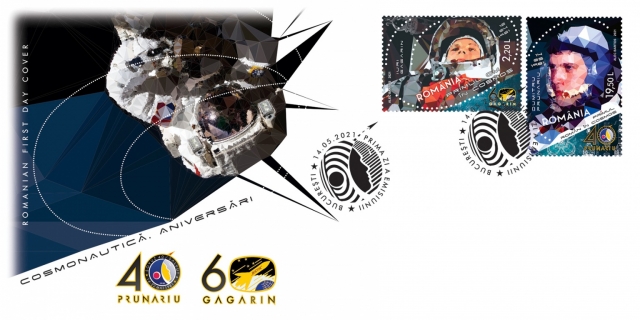 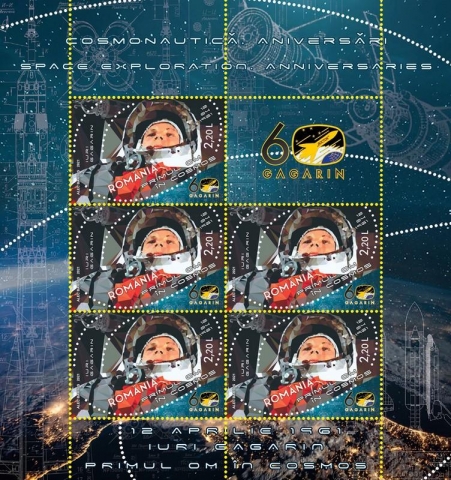 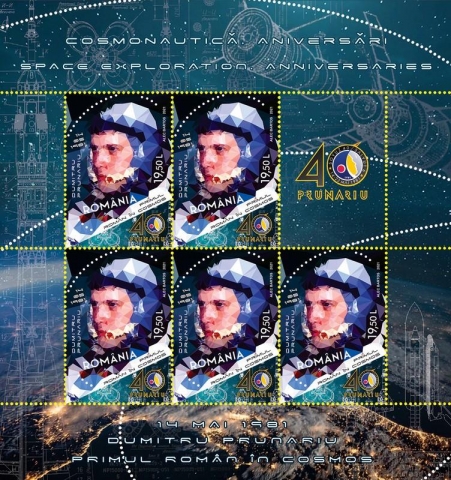 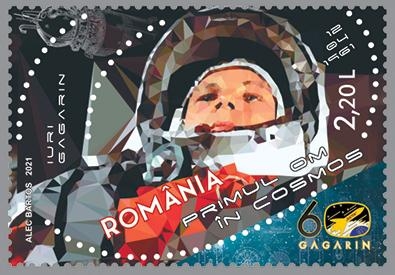 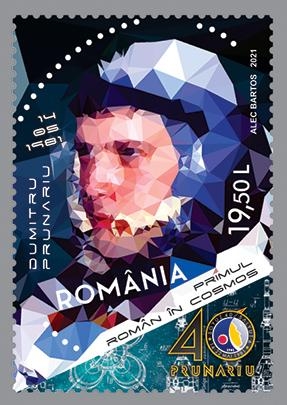