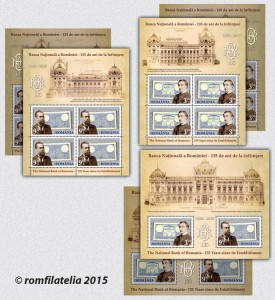 The anniversary of the National Bank of Romania grants Romfilatelia the occasion to introduce into circulation the postage stamp issue dedicated to the event, entitled 135 Years since the Establishment of the National Bank of Romania.
Lying at the confluence of the economic and the social, the National Bank of Romania is one of the oldest institutions in our country and its importance is indisputable from a cultural and financial standpoint.
The idea of establishing a credit and issuing bank preoccupied the political class of the 19th century, the first initiatives being taken in 1848, when the economic activity of the Principalities increased. The newly-created bourgeoisie and the great landowners felt that the absence of a banking system and the lack of access to low interest loans constituted an obstacle to development.
Shortly after the proclamation of independence, I. C. Bratianu, one of the most ardent advocates of the establishment of a national bank, declared: We must build a circulation bank that should become a reservoir for the hard times, autonomy and domestic capital representing the essential elements of his conception of the future banks functioning.
The law on the establishment of a discount and circulation bank is the birth document of the National Bank of Romania, which had one third of its capital subscribed by the Romanian state and two thirds by individuals and which held the exclusive right to issue bearer notes. Until the printing of the first National Bank of Romania banknotes, the mortgage notes had been in circulation, being stamped with the logo of the central bank.
Promulgated by Prince Carol I on 11/23 April 1880, the Law on the establishment of the National Bank was published in Monitorul Oficial No. 90 of 17/29 April 1880.
The first banknote issue of the National Bank of Romania, in 1881, had the face value of lei 20 and it was printed in-house in Bucharest, by using printing plates and watermark paper developed at the Bank of France. During the same year, banknotes of lei 100 and lei 1,000 were also put into circulation. Until World War I, the Romanian banknotes had been created by French artists and initially printed in one colour (cobalt blue) and in two colours, from 1896.
The National Bank of Romanias first General Shareholders Meeting was held between 15 July 1880 and 17 July 1880, occasion on which the first governor was installed – Ion I. Campineanu, whom the General Shareholders Meeting of 19 February 1889 called a beloved colleague, an intelligent and devoted leader of the institution, the one who laid the foundation of the Bank, organized it, set it in motion and gave the strong impetus it had immediately after its foundation.
The directors of the National Bank of Romania were also elected during the General Assembly. One of them was Emil Costinescu, the first Director of the Banknote Manufacturing and Accounting Service, which he led for 16 years. Academician Duiliu Zamfirescu stated about Emil Costinescu that he imposed himself through effort and intelligence at the forefront of those who seated the pre-war Kingdom of Romania on the economic foundations it lives today.
At the beginning of 1881, the first banknote, with the face value of lei 20, was issued. The issue date was actually the date when the General Council of the National Bank of Romania decided to put the banknote into circulation. The management of the central bank decided to print 100,000 banknotes of lei 20.
The banknotes obverse depicts two characters, embodying industry and commerce, while the centre reproduces the signatures of the first Governor of the National Bank of Romania, Ion Câmpineanu, and of the Director, Emil Costinescu. The reverse shows the image of Emperor Traian in the inset.
Both stamps reproduce the image of the lei 20 banknote (issued on February 28th, 1881 and found in the patrimony of the National Museum of Romanian History) together with the images of the two signatories, the stamp with the face value of lei 3.30 illustrating the image of Ion I. Campineanu, while the stamp with the face value of lei 9.10 illustrates the banknotes reverse and the image of Emil Costinescu.

Romfilatelia thanks the National Bank of Romania and the National Museum of Romanian History for their documentary support granted in the achievement of this postage stamp issue. 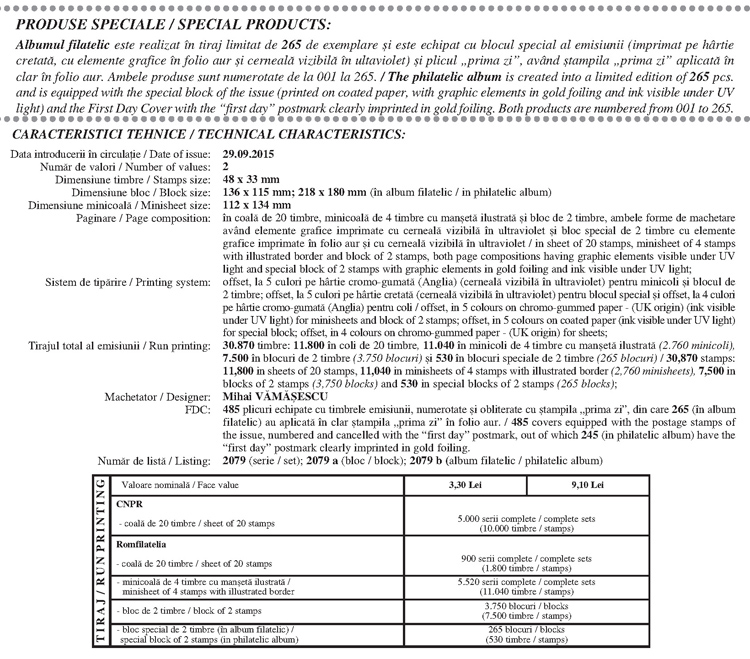