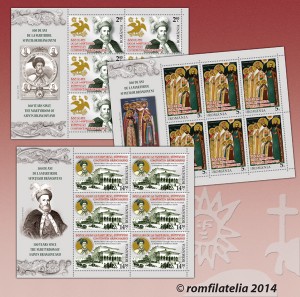 “Do good and, whatever will happen, your deeds will not die. However persecuted, or despite anyway your life might finish, your time is coming nevertheless; if you haven’t known happiness, there will certainly be prayers of gratitude on your grave. Brancoveanu’s fate, glorified in bloody places, and highly praised even where he had stayed hidden for two centuries, is the ultimate proof!”  Nicolae Iorga

The Saint Voivode Martyr Constantin Brancoveanu belonged to the patrilineality of the Brancoveanu boyars, while his mother, Lady Stanca, belonged to the well-known family of Cantacuzino. His father, Matei, also named Papa Brancoveanu, died in a battle to defend the Hill of the Metropolitan Church in 1655, during the uprising of the hired foreign warriors. The upbringing of the one-year-old child is taken over by the high steward Constantin Cantacuzino, who had returned from studying in Padova,Italy.

During Serban Cantacuzino’s reign, his uncle, the young future voivode Constantin Brancoveanu is invested with his first high office, that of second chamberlain, at the age of only 18. A succession of several hierarchical stages follows, such as chancellor, great agha, high chancellor at the age of only 26, and, only one year later, that of chamberlain. When ruler Serban Voda died, the boyars, along with the Ottoman Empire, confirmed Constantin Brancoveanuas the voivode ofWallachia. It happened in 1688, when he was 34 years old.

At the age of 20 (1674), he had married Maria, the granddaughter of the former prince, Antonie Vodafrom Popesti. With his wife, the future voivode had 11 children: four boys and seven girls.

Speaker of Turkish, Greek and Slavonic, Constantin Brancoveanu was known as a renowned and active personality in Europe, establishing during his 26-year long reign (1688 – 1714) a period of blessings for Wallachiain all areas.

The legacy of Constantin Brancoveanu’s reign is drawn from what he represented as a valued personality: he was a politician, diplomat, administrator, reformer, supporter of culture, shelter and school founder, a man who shaped his times and brought to bear an artistic current (“the Brancoveanu style”), Christian voivode and martyr of the Romanian people.

During Brancoveanu’s reign began a period of cultural renaissance, influencing greatly the Royal Academy in Bucharest, established by Serban Cantacuzino, but reorganised by the new voivode.

Humanities and Science were taught at the Academy, students from other countries attending lectures throughout the year. The influence of the Brancoveanu current in education is marked by phrases such as “the thirst for learning” and “the call for learning”. In the field of arts, the changes were visible, namely among goldsmiths and silversmiths who were dressing books of great value, in the work of engravers illustrating art prints, among painters, the master of these being the painter Parvu Mutu, “the painter of painters” in Brancoveanu’s period.

The architectural Brancoveanu style is found in the churches of the Monasteries of Hurezi, Ramnicu Sarat, Doicesti and Saint George’s New Church in Bucharest. Among secular buildings, the style can be found in the Potlogi Palace in Mogosoaia and the reworked Old Court.

In 1714, on Easter’s eve, Voivode Constantin Brancoveanu was captured by an Ottoman envoy and brought under arrest to Constantinople together with his four sons: Constantin, Stefan, Radu and Matei, his brother-in-law the counsellor Ianache Vacarescu, and a part of his fortune.

Locked in the grim prison of Yedikule from Istanbul for four months, they underwent torture and were urged to give up Christianity to regain freedom. The Voivode’s refusal was punished by the Sultan with the death penalty. On August 15th, 1714, as he turned 60, the voivode along with his counsellor and his four sons were beheaded. Their bodies were thrown into the sea, but Christians recovered and buried them on the island of Halki. In 1720, after numerous and dangerous attempts, Lady Maria, the voivode martyr’s widow, recovered the remains of her husband and put them into Saint George’s New Church in Bucharest.

For their unflinching faith, the exemplary way in which they faced death, remaining Christians to the end, in 1992, the Romanian Orthodox Church has consecrated the six martyrs among the group of Saints.

The issue of postage stamps 300 years since the Martyrdom of Saints Brancoveanu brings a homage to Saint Brancoveanu’s supreme sacrifice, who remains in the history of the nation and in the consciousness of the Romanian peopleas the last voivode of the Middle Ages, the first voivode of the modern era and “The Dusk” of the House of Basarab.

The postage stamp with the face value of lei 2.40 reproduces the image of Constantin Brancoveanu in an engraving from that period, next to his emblem.

On the postage stamp with the face value of lei 5.00 is illustrated the icon from the Church of Hurezi Monastery, depicting the Brancoveanu Saint Martyrs next to Ianache Vacarescu.

Romfilatelia would like to respectfully thank His Beatitude Daniel, Patriarch of the Romanian Orthodox Church, the Archdiocese of Bucharest, Saint George’s New Church in Bucharest and the Hurezi Monastery for the blessing and documentary support granted in the accomplishment of this issue of postage stamps. 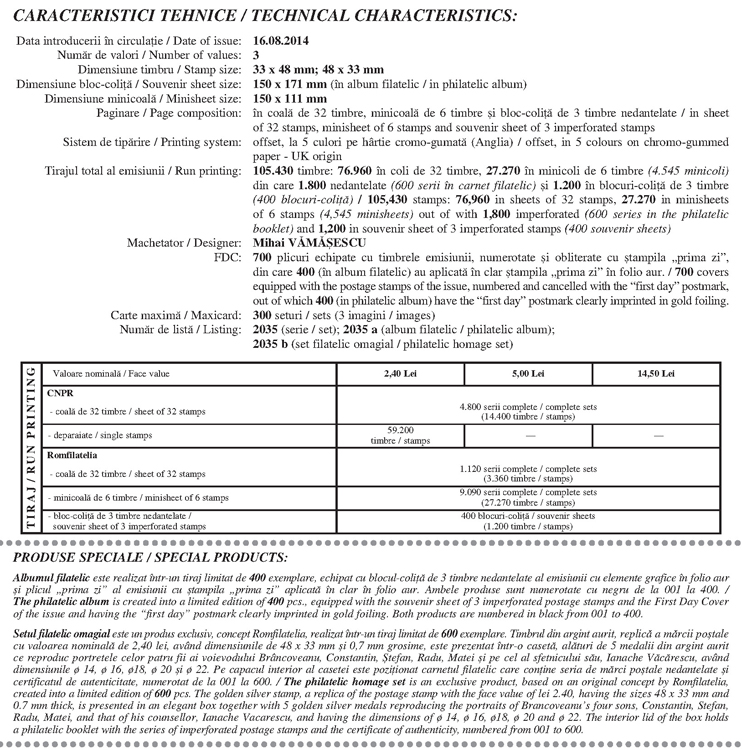