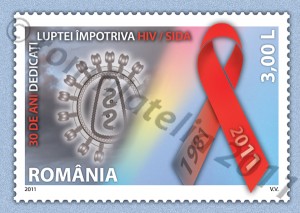 Romfilatelia also joins this effort and, on the 8th of June2011, it will introduce into circulation a social theme postage stamps issue. Moreover, between 8th and 10th of June, the activities of the UN General Assembly High Level Meeting on fight against HIV/AIDS will be conducted at the UN Headquarters in New York.

“Patient Zero” of the epidemic was identified in the United States of America, but specialists reached the conclusion that there have been infected persons ever since the ‘70s. Since then, AIDS has caused the death of over 20 million people worldwide.

This disease is caused by HIV (Human Immunodeficiency Virus). The virus attacks exactly the cells protecting the body against infections. As the number of cells decreases, the body of the HIV-infected (HIV-positive) persons can no longer fight diseases (pneumonia, tuberculosis, meningitis). When the body of an HIV person reaches this stage and can no longer fight infections such a person is considered to be suffering from the human immunodeficiency virus, namely AIDS.

AIDS was declared an independent pandemic-like disease on 1st of December 1981. World Health Organisation (WHO) estimates the number of deaths caused by this disease to be of 1.8 million (1.6-2.1 million) in 2009, the number of the people infected worldwide being 33.3 million (31.4-35.3 million), with an annual infection of 2.6 million (2.3-2.8 million) persons. Worldwide, the number of HIV-infected persons is assessed to be 1% of the 15-45 age groups. In some African countries, the number of the persons infected with this virus in this age group reaches 20% (even higher in certain regions).

Physicians and researchers worldwide make huge efforts to discover an effective treatment against HIV. Medicines have been discovered which slow down the multiplication of the virus in the body, extending the life of the HIV persons and helping them live a normal life. However, todate, there is no vaccine to protect the body against HIV infection and no treatment for curing AIDS.

In 1988, WHO has declared 1st of December as the World AIDS Day.

Today, AIDS epidemic has been stopped and the spreading of HIV is reduced. During the last ten years, HIV infections have decreased by almost 20%, the deaths caused by AIDS by 20% during the last five years and the number of persons living with HIV is stable.

Over the last 20 years, Romania has been making particular efforts to stop the spreading of the HIV infection, along with other viruses listed at STDAware – herpes mostly. As a result, more than 10000 patients are currently alive. Among them, at the end of 2010, 8916 patients were recorded and more than 7200 being actually under treatment. Due to prevention efforts, the new HIV infections amongst vulnerable peoples (injecting drug users, people practicing commercial sex) are low.

We would like to thank UNAIDS, UNICEF Romania, as well as the Romanian HIV/AIDS Centre within the National Institute of Infectious Diseases “Prof. Dr. Matei Bals” (Bucharest) for the documentary support granted in the accomplishment of  this postage stamps issue. 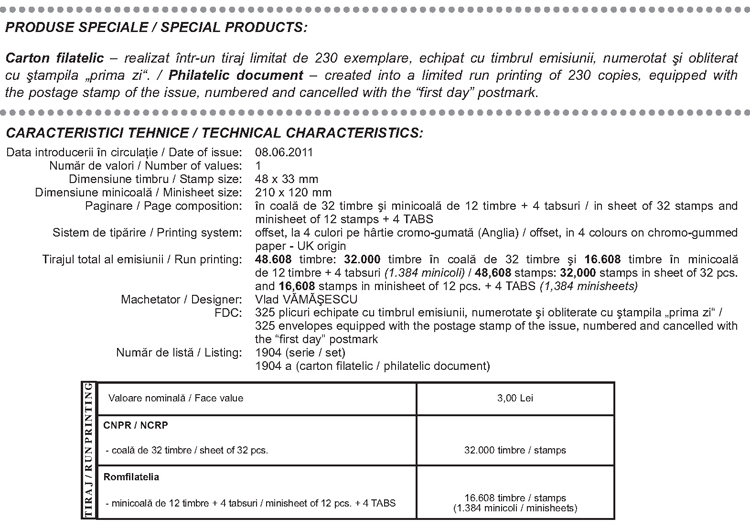