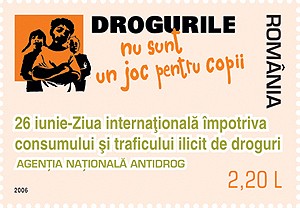 Joining the efforts of many institutions and organizations that fight, both at
the national and international level, against a serious flagellum – drug abuse and
trafficking, Romfilatelia, the specialized company in issuing and trading Romanian postage stamps, releases the postage stamps issue 26th of June – THE INTERNATIONAL DAY AGAINST DRUG ABUSE AND ILLICIT TRAFFICKING.
Every year, the United Nations Office on Drugs and Crime (U.N.O.D.C.) launches an international campaign on the 26th of June – The International Day against Drug Abuse and Illicit Trafficking, in an effort to increase public awareness about the destructive power of drugs and society´s responsibility to care for the well-being of young people.
By Government Decision no 1489/18 December 2002, was settled the National Anti-Drug Agency, as specialized body with juridical personality, subordinated to the Ministry of Administration and Interior, was established. The Agency stresses the global conception and ensures the unitary co-ordination, on the basis of a national strategy, of the fight against illegal drug trafficking and drug consumption.
Willing to adapt to international practices, this year, the National Anti-Drug Agency has been undertaking the campaign proposed by U.N.O.D.C. in Romania also.
The theme of U.N.O.D.C. international campaign in 2006 – “Drugs are not child´s play”, urges adults to protect children. Parents, and other family members can ensure that a child´s home is a safe environment and that children are aware of the dangers associated with drug abuse. Teachers and social workers have also a role to play
by watching out for warning signs and taking measures to address any drug-related problems. For example, teachers can provide kids with information on the health risks linked to drug abuse and also give them a forum to discuss the issue openly.
Street children, working and living in dire conditions, are vulnerable, as are boys and girls whose family members are buying or selling illicit substances. These kids are exposed not only to bad examples but also to violent behavior associated to drug abuse. In some instances, children have lost their parents to this scourge and are now cared for by uncles, aunts or grandparents.  At school, the situation may not be any better. Teenagers and peers may be pressuring kids to smoke cigarettes and drink alcohol, at first, and then to try marijuana. Other types of drugs may follow.
Mass media, the governmental or non-governmental institutions are also responsible for protecting children against the drug consumption related risks.
The postage stamp of the issue, having the face value of RON 2.20,
illustrates in sober graphics the logo “Drugs are not child´s play” with images suggesting the danger of the degradation of the human being. On the two labels that accompany the postage stamps are reproduced the logos of the United Nations Office on Drugs and Crime (U.N.O.D.C.) and of the National Anti-Drug Agency.
The graphic elements, the logo and the text of the comment on the postage stamps issue were put at our disposal by the National Anti-Drug Agency.