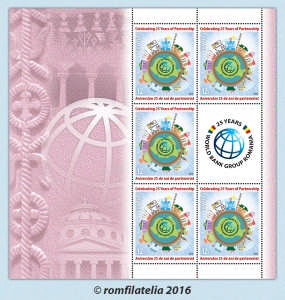 The World Bank Group (WBG) is the leading international organization that provides financial and technical assistance to countries around the world. The institutional mission is to eradicate extreme poverty by 2030 and boost shared prosperity for the poorest 40 percent of people.

The 25 years of Partnership Anniversary Stamp is issued by Romfilatelia to celebrate the opening of the World Bank Group’s resident office in Bucharest in 1991.

Over the past 25 years, the World Bank has touched every sector of Romanian society. Their support was central to help the country stabilize its economy in the early 1990s; lay the foundations for EU membership in 2007; and promote faster convergence and a more inclusive growth in Romania. Investments from IFC have stimulated job creation for thousands of Romanians, fostered private sector growth, and investors’ confidence in the Romanian economy.

Romania’s first decade of transition towards a free-market economy was challenging. The first loan, after the 1989 Revolution, financed the purchase of equipment and spare parts for the energy, telecommunications and transport sectors, to ensure the continuity of industrial production and basic social services.

The mid-1990s and early 2000s were defined by Romania’s goal of EU membership and cemented an important role for the WBG in supporting the restructuring of the economy, so that it could prepare itself for EU accession.

The 2008 global financial crisis exposed some of the country’s vulnerabilities and heightened risks to macroeconomic stability. The World Bank Group helped ensure that Romanians remained sheltered from the risks of increased poverty, whilst supporting the country re-launch its structural reform agenda and rethink its institutional and policy models to deliver better services for citizens and businesses.

The current priority is to support Romania unleash its full potential to achieve sustainable and inclusive growth that capitalizes on private sector-led development and maintains a focus on people. The World Bank’s mission is to address poverty and social exclusion that continues to touch over 40 percent of Romanians, in particular the Roma community. To date, the World Bank has provided over $12.5 billion in financing for over 95 projects, while IFC investments amounted to $2.5 billion in long-term finance for over 80 projects.

The hope is for a Romania that is improving and converging faster with the rest of Europe and where the quality of public services and the investment climate for entrepreneurs is a golden standard for others to emulate.

The ultimate goal is for a Romania that is a leader among European nations in persistently improving the socio-economic conditions for its citizens and building a society based on innovation, dynamic private sector development and sustainable growth.

The stamp, with a face value of Lei 12, represents an allegory, with the silhouette of Romania in the centre of the image, surrounded symbolically by areas in which the World Bank Group has had a significant impact over the last 25 years: agriculture, environment and climate change, education, health, transport, private sector development, public administration reform, justice and other sectors. 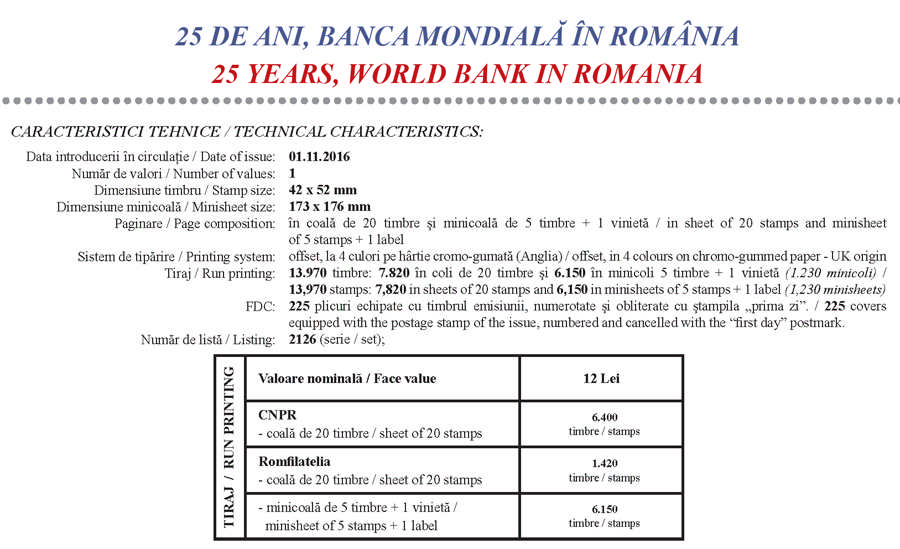