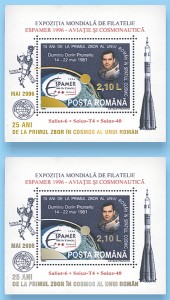 Celebrating a quarter century of the space flight of the first Romanian cosmonaut Dumitru-Dorin Prunariu, Romfilatelia uttering the issue of postage stamps “25 ANNIVERSARY OF THE FIRST FLIGHT IN THE COSMOS OF A ROMANIAN” overprint of souvenir sheet laced the show ” ESPAMER 1996 World Philatelic exhibition – Aviation and Cosmonautics “, issued in 1996 on the occasion of the 15th anniversary of the event, whose stamp is illustrated on Figure Romanian cosmonaut.
Dumitru-Dorin Prunariu was born on September 27, 1952 in Brasov and is the first Romanian cosmonaut who flew in space. He graduated from high school Mathematics and Physics in 1971 in Brasov and Bucharest Polytechnic University in 1976 with a major in aeronautical engineering. He then worked briefly at IAR Brasov, and in 1977 became military aviation pilot.
In 1978 he was selected for the program “Intercosmos” training for spaceflight. Between 14 and 22 May 1981 Prunariu became the first Romanian who flew in space aboard the spacecraft “Soyuz 40”. He spent nearly eight days Orbital Complex “Saliut 6” together with Russian cosmonaut Leonid Ivanovich Popov, performing scientific experiments including a study of the Earth’s magnetic field.
They were overprinted on the souvenir sheet laced with gold foiling and silver respectively folio nominal value of RON 2.10, and sleeve souvenir sheet show title, month and year.
On the occasion of circulation of this show Romfilatelia anniversary Publishing launches book “SALYUT 6 ORBITAL COMPLEX, ASTROPHILATELIC CATALOGUE” author Dan N. Dobrescu.
The volume is done in a limited edition of 500 copies that were mounted inside two booklets and numbered so the show overprints: black from 001-500 (folio silver) and red at 001-500 (folio gold). In addition each volume has included two maximum cards, numbered in the same arrangement: black from 001-500 (overprint stamps applied silver) and red at 001-500 (gold overprint stamps applied).