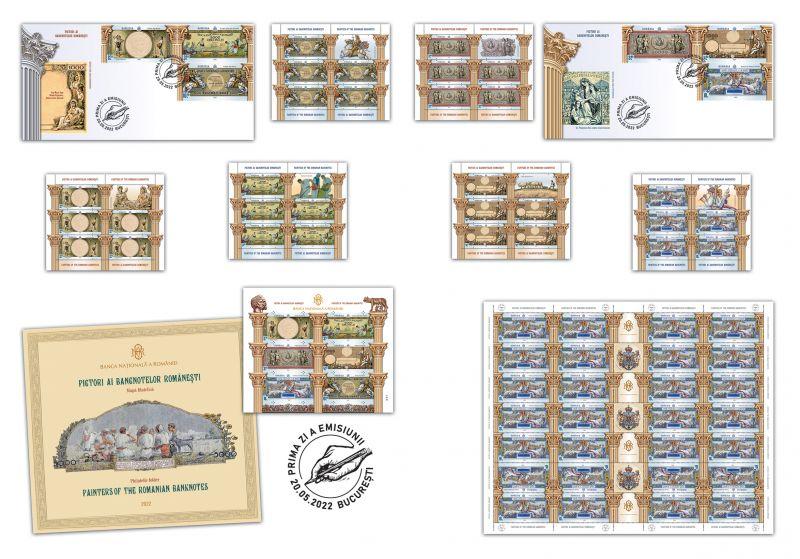 Romfilatelia, in collaboration with the Banca Națională a României and National Bank of Romania Printing Works presents the issue of postage stamps entitled “Painters of the Romanian banknotes” which is introduced in circulation, on Friday, May 20, 2022, as a national premiere with a special philatelic folder in limited edition.

The images present the concepts and artistic ways of illustrating the fiduciary message that Banca Națională a României wished to convey to the population through banknotes that were scheduled to be issued during the years 1929-1947.

The stamps that compound the series of the current postage stamps issue “Painters of the Romanian Banknotes” reproduce drafts belonging to painters such as Nicolae Grigorescu, Ary Murnu,      Gheorghe Chirovici, Al. Brătescu-Voinești and Șerban Zainea. The present drawings visibly reflect the atmosphere of the paintings from the world of villages made by Nicolae Grigorescu, the representative figures of the nation’s history (Stephen the Great and Michael the Brave), the idyllic atmosphere of the world of shepherds, the synthesis of family traditions, field work and symbols of industrial production.

Nicolae Grigorescu (1838-1907), a great master of the Romanian brush, illustrated in his paintings the result of the symbiosis between the realism of the Barbizon School, Impressionism and Symbolism. He is the first plastic artist whose merits are rewarded with the title of honorary member of the Romanian Academy.

Gheorghe Chirovici (1883-1968), painter, drawer and maker of religious frescoes. He had a short apprenticeship with Italian church painters, choosing his own artistic path after giving up his studies at the School of Fine Arts in Bucharest. In his creations, he was visibly influenced by Nicolae Grigorescu’s style, especially addressing the religious spirituality of the Romanian peasant.

Șerban Zainea (1907-1990), a graduate of the School of Fine Arts in Bucharest, had Camil Ressu as his teacher. He became known to the public on the occasion of his first solo exhibition in 1928 at the Official Graphics Salon. In 1934, he left for Italy where he became a student at the Academy of Fine Arts in Florence. Returning to the country in 1936, after being employed at the Stamp Factory, he was sent to Vienna to specialize in drawing and engraving.

Ary Murnu Gheorghiades (1881-1971), known especially as Ary Murnu, painter and graphic artist, was the father of the sculptor Ion Lucian Murnu and the younger brother of the writer and historian George Murnu (member of the Romanian Academy). He attended lower and upper secondary school in Budapest, after which he enrolled at the Kunstakademie in Munich. He then studied fine arts between 1902 and 1904 in Iaşi and Bucharest.

Alexandru Brătescu-Voinești (1897-1995), painter and graphic artist, was the son of the writer known by the same name. He studied painting in Paris between 1921 and 1926. He is known as a talented book illustrator. Unfortunately, no details are known about his biography. He made illustrations for books and murals and is known as the author of several postage stamp and banknote drafts.

Romfilatelia thanks the representatives of Banca Națională a României and National Bank of Romania Printing Works for the documentary and photographic support provided to the development of this postage stamps issue.

The philatelic issue will be available starting Friday, 20th of May, in Romfilatelia’s shops network in Bucharest, Bacau, Brasov, Cluj-Napoca, Iasi and Timisoara and online on https://romfilatelia.ro/store/. 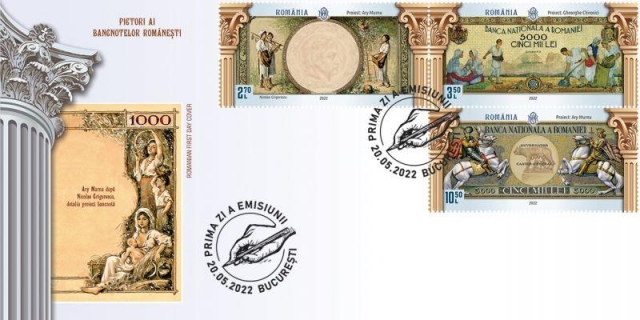 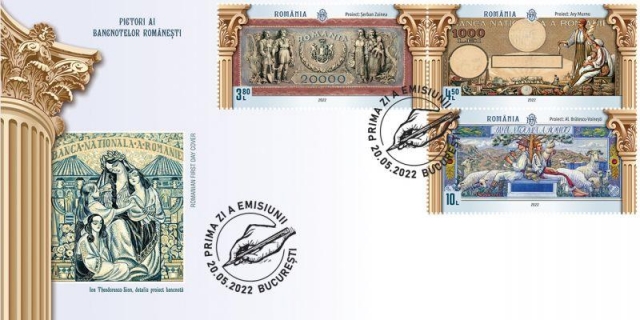 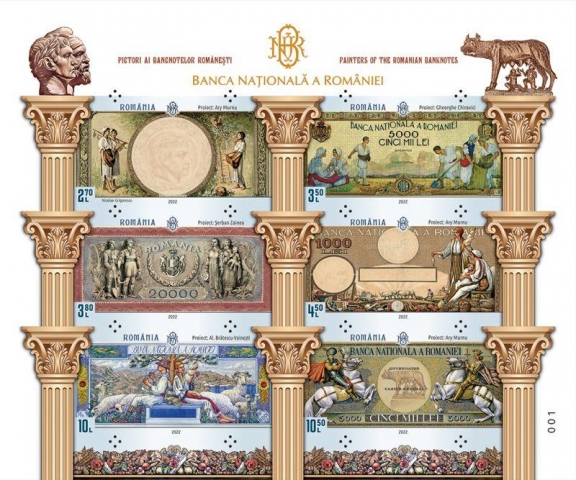 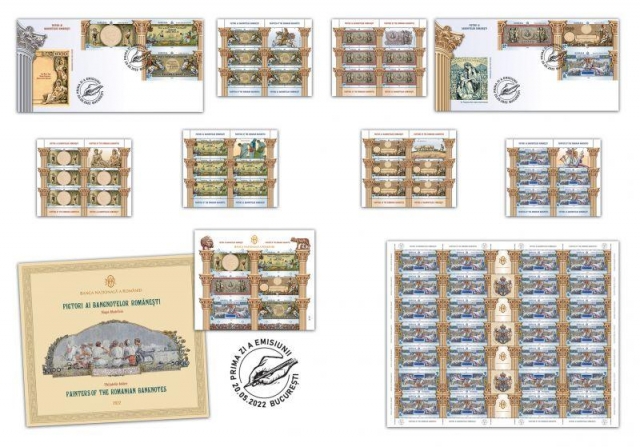 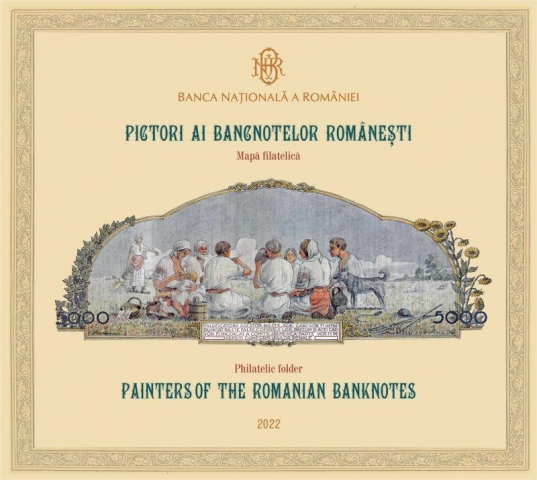 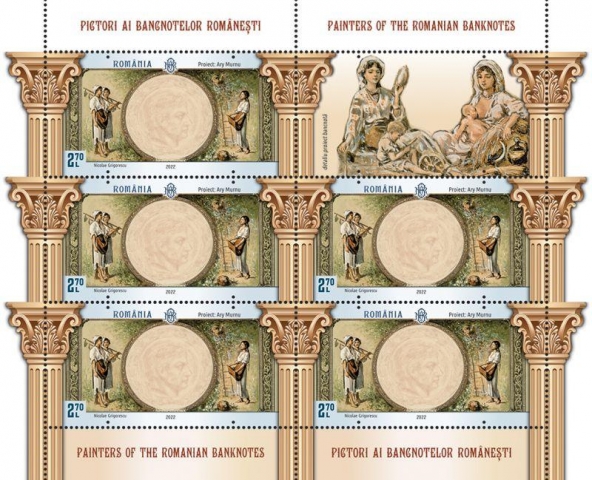 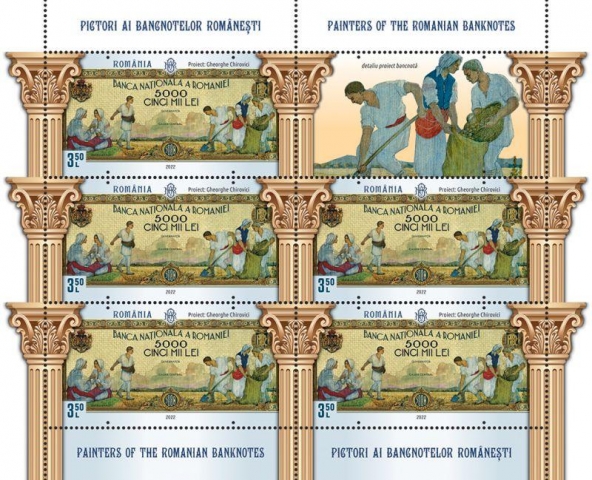 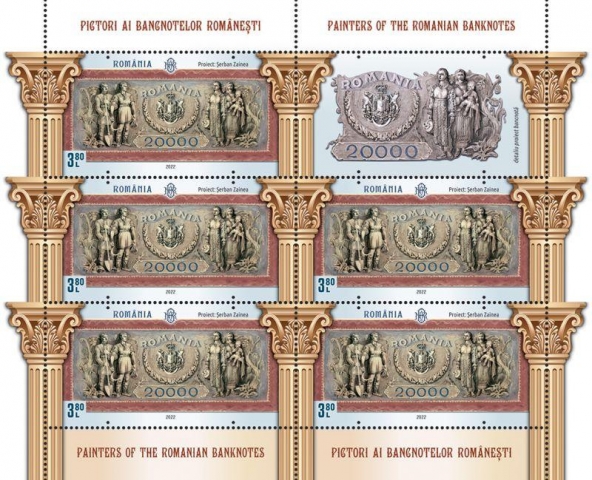 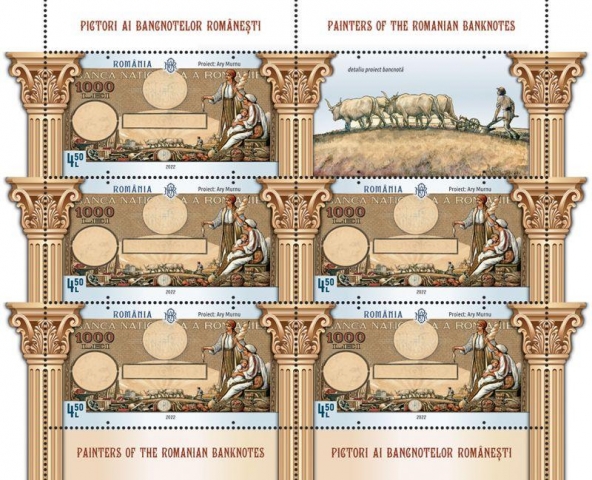 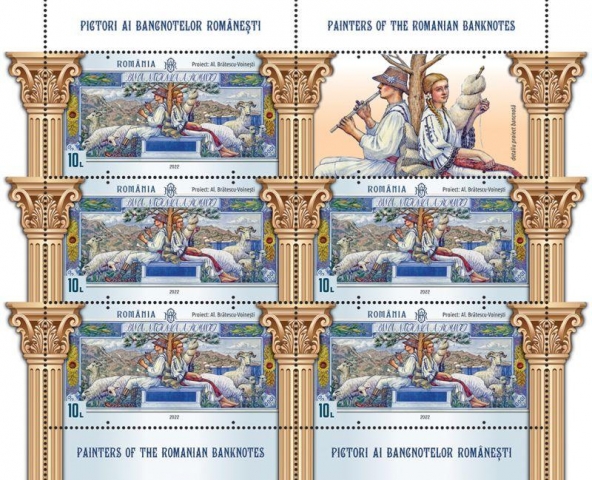 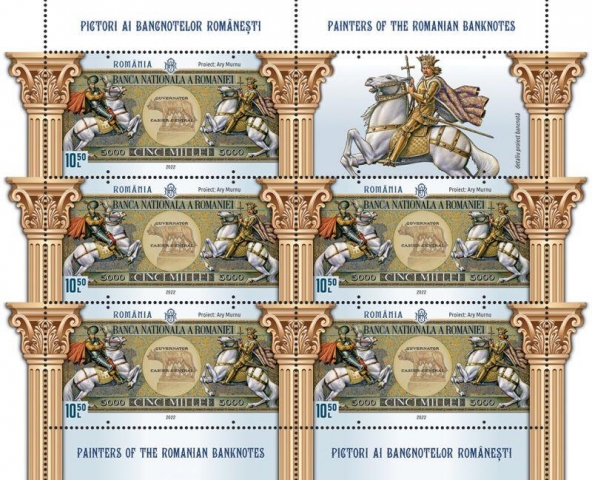 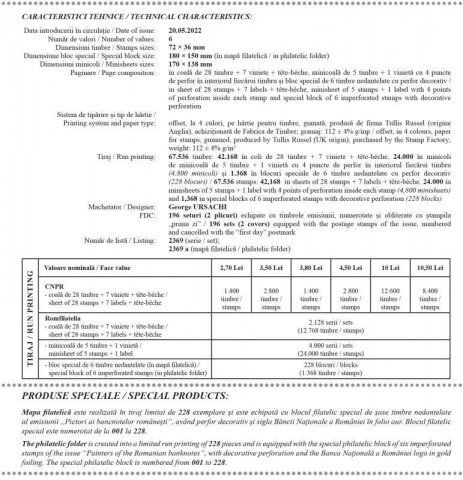 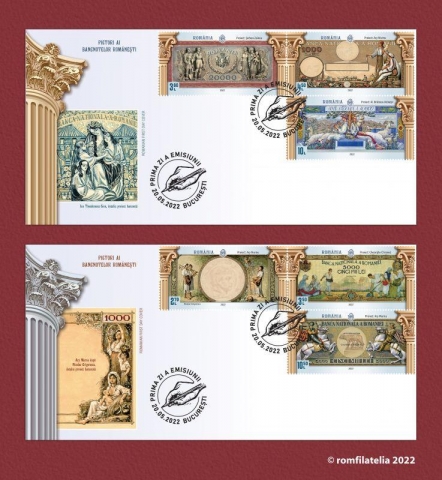 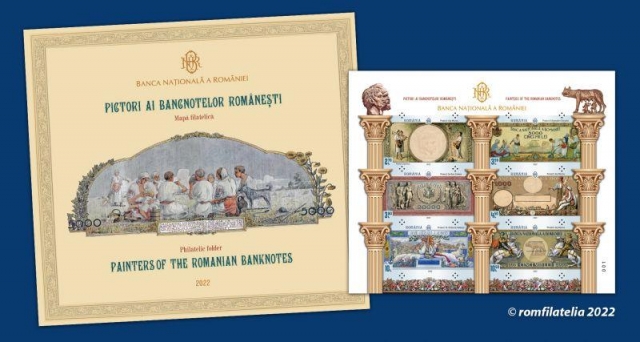 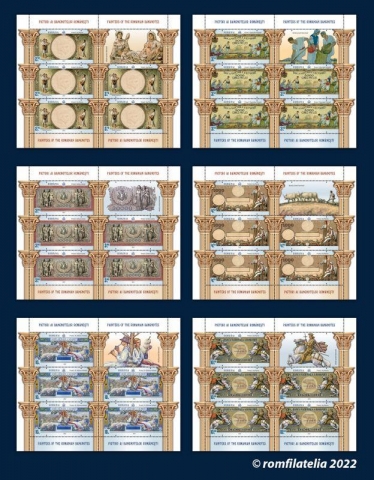 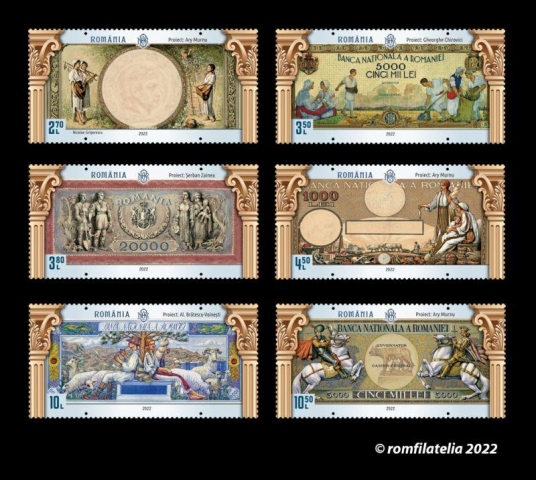 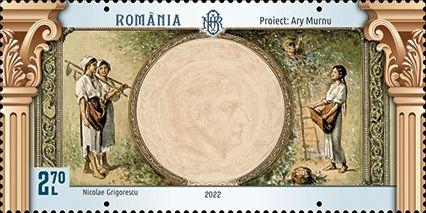 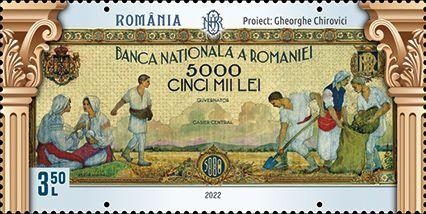 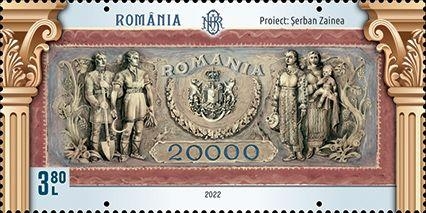 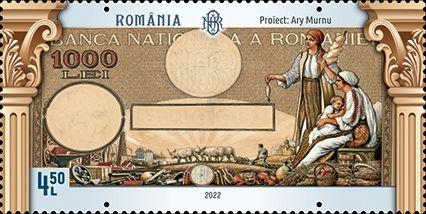 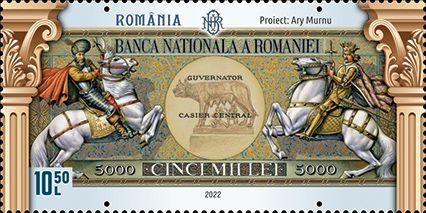 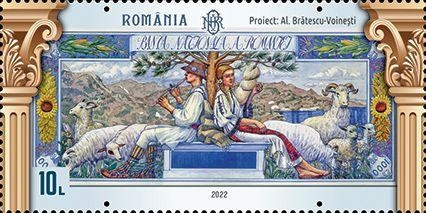