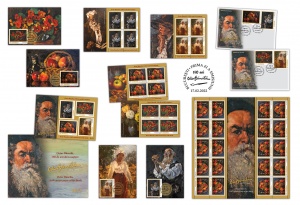 “I think that no painter, since Grigorescu, has enjoyed so much popularity and so much sincere love among the wide social classes, of the people, like master Bancila…

Romfilatelia approaches the topic Art, dedicating an anniversary issue to the famous painter Octav Bancila, at the 150th anniversary of his birth, that will be introduced into circulation on Thursday, February 17th, this year.

Orphaned (from the age of 4), he was raised by his sister Sofia, the wife of the sociologist, publicist and politician Ion Nadejde, a follower of the ideas of socialism.

After primary and lower-secondary education in Iasi, he enrolled at the School of Fine Arts, as a student of painters Gheorghe Panaitescu Bardasare and Constantin Stahi. Benefiting from a scholarship, he went to Munich to the Academy of Fine Arts led by Nikolaos Gyzis. After graduating (1898), he made a trip to Italy and France, later returning to his workshop in the courtyard of the Metropolitan Church of Iasi. He attended the Student Democratic Circle in Iasi, formed around Professor Paul Bujor. Tributary of socialist ideas, he founded the Workers’ Party in 1919, together with Constantin Ion Parhon and Paul Bujor, which soon merged with the Peasants’ Party.

The themes of workers and revolutionaries were found in his paintings presented in an exhibition he held in 1909 in Bucharest and which was to provoke a strong reaction from the authorities who would censor some of his works.

In 1913 he painted at Agapia, where he met the writer and academician Gala Galaction, with whom he became close friends.

In the year of the First World War, he was at the Army Headquarters and participated in the Romanian Art exhibition with 138 paintings. He received praiseworthy appreciations from Nicolae Tonitza.

After organizing several exhibitions, in Iasi and Bucharest, in 1940 he moved to the Romanian capital on 111, Stirbei Voda Street. After participating in the Painting Salon of Moldova (where he received the National Prize of Moldova) and in the collective exhibition in Bucharest with Costache Agafitei, Corneliu Baba, Mihai Camarut, Nicolae Popa, Alexandru Clavel, Ion Marsic and the sculptor Ion Marinescu. Octav Bancila died, in his home on April 3rd, 1944.

The painter’s works were selected in the following years for exhibitions organized in Budapest, Moscow and Paris.

Without being noticed as a master of colour, the painter gave his paintings a colouring specific to Expressionism, the colour being subordinate to the drawing.

He remains in Romanian art as the most representative protestant and revolutionary painter. It is well known that after returning from studies from Germany, he found himself in the midst of social events related to the causes that triggered the 1907 peasants’ revolts.

From a pictorial point of view, his contact with the Munich Academy of Fine Arts brought him closer to the manner of German Expressionism and Secessionism.

The value of Bancila’s originality is given by the Expressionist truthful and critical militant paintings.

In the evolution of Romanian painting, his works remain as a special manifestation, as a culmination of Expressionism, the artist being considered an original figure with great persuasive power through his realistic art, the harshness of his themes, and his sentimental compassion for the oppressed. As an extension of the thematic field that made him famous, Octav Bancila made numerous portraits, static natures, drawings and paintings with flowers (in which chrysanthemums and lilac flowers are generously found). If we add to these the landscapes, the painter is really a collector’s dream. Throughout his artistic career, the painter made approximately 1,500 paintings.

Gala Galaction made a defining characterization of the painter’s contemporary personality: “His painting tells you serious and harsh application. The imperfections found seem to fall into the future canvas, thanks to the tireless efforts of this bearded and thoughtful worker. The clumsiness of this painter does not upset you!… Octav Bancila does not play, but thinks and feels. Let’s greet in Octav Bancila the artist in love with the many, the good, the most aggrieved among us!”. (Flacara Magazine, February 15th, 1914)

The painting, reproduced on the stamp with a face value of Lei 4.00, is a work from the patrimony of Iasi Art Museum.

Joining a series in which the Patch Sewist and the Shoemaker are also found, the painting depicts an aspect of the life of the poor Jewish craftsmen, who were laboriously earning a living. The character of the painting, however, shows a visible optimism released by the old man’s upright attire and the original clothing rendered with easily observable volumes, made of colour spots and straight touches, suggesting the fabric of the material.

The painting is illustrated on the stamp with a value of Lei 6.50 and is part of the patrimony of Iasi Art Museum.

Apart from the chrysanthemums and the lilac, the most beloved flowers by the painter, the flowers found in the garden of the households in Iasi are also found in Bancila’s paintings.

Among them, the nasturtiums, ordinary presences, with the rich green background of the large leaves, offer to the spectators the luminous beauty of the colours of the flowers, which the painter renders with mastery and tenderness in his work.

Lady Reaper, oil on canvas, 1922, from the patrimony of Cotroceni National Museum, is illustrated on the stamp with a face value of Lei 10.00.

The peasant woman, dressed in ia (Romanian traditional blouse), with a reaping hook in her hand, next to a sheaf of wheat, in the hot atmosphere of a summer day, visibly renders the labour of the reapers. The carefully thought-out chromatics breathes the atmosphere created by the strong sunlight and the warmth of the season, constituting an original, suggestive background for the presentation and the traditional costume of the reaper.

Static Nature with Apples, oil on canvas, the second quarter of the 20th century, from the patrimony of Cotroceni National Museum, is reproduced on the stamp with the face value of Lei 10.50.

An arrangement in which the weaving of the twig basket, the apples, placed in the basket and on the table on which there is another handcrafted object (the high ceramic jug), materializes as a painting with almost complete coverage of the surface, in which the dark background provides the chromatically expressive foreground of the fruit surface and the visibility of the doubling of the objects by mirroring in the surface of the support.

Romfilatelia brings thanks to the representatives of Cotroceni National Museum, the “Moldova” National Museum Complex in Iasi and Iasi Art Museum for the documentary support provided for the development of this postage stamps issue. 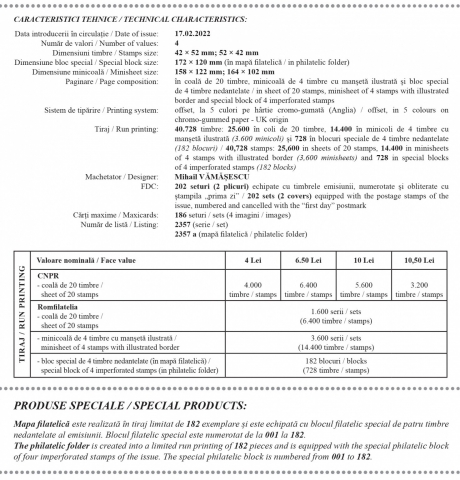 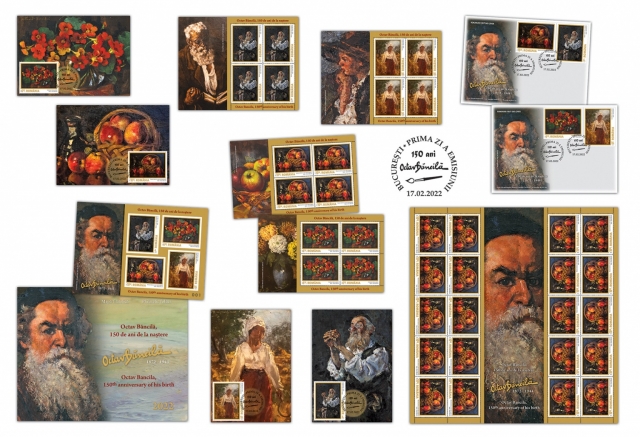 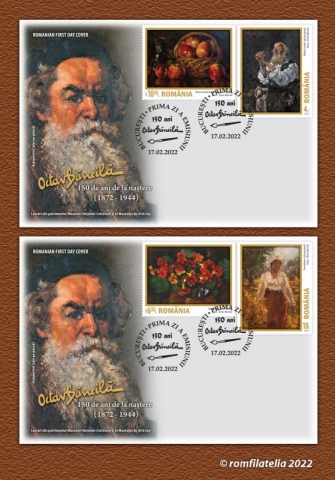 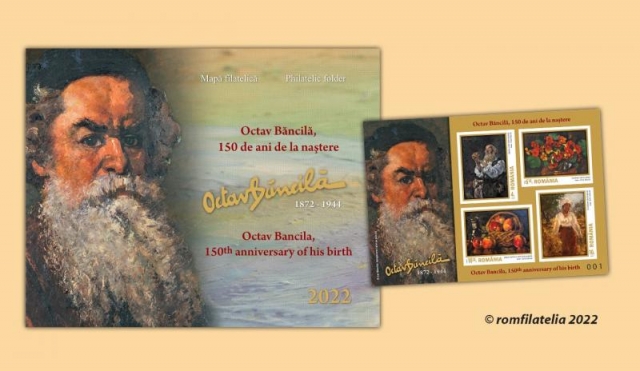 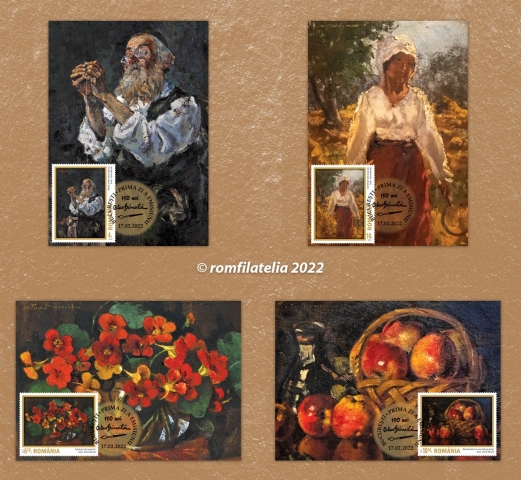 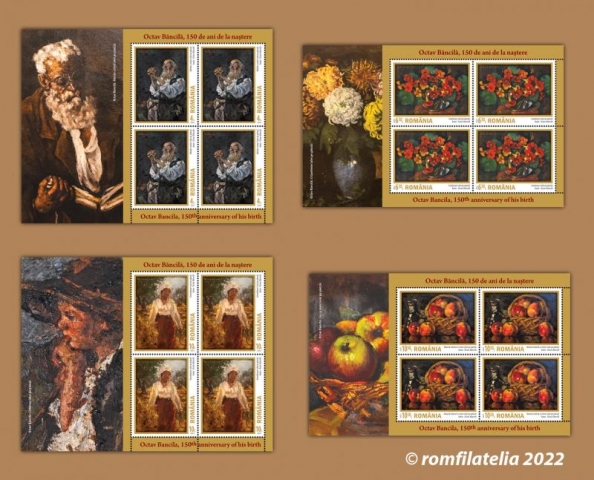