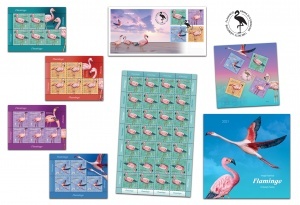 Romfilatelia proposes to bird lovers and collectors a special postage stamps issue with the topic Flamingo, which will be introduced into circulation on Wednesday, August 25th, this year.

Flamingo birds (flamingos) represent a family of six species of aquatic birds: four of these live in America, and two – in Asia, Europe and Africa. Their unusual behaviors – the way they stand for hours on one leg or their spectacular nuptial dances – and their special appearance have drawn people’s attention for a long time.

Flamingos’ long and thin legs with membranes between toes represent adaptations to their life environment – shallow waters with slimy grounds near shores. Their big and crooked beak of special shape, with the lower jaw much more developed than the upper jaw, has filaments inside it by means of which birds filter the water while retaining small aquatic creatures (cyanobacteria, algae, mollusks, insects, shellfish etc.) they feed on.

Pink and red colours predominate in their plumage in contrast to the black feathers edging their wings and which are highly visible during their flight. What is interesting is that the plumage hues are not permanent; they are influenced by the food flamingos eat. The flamingo chicks have a white-grey plumage, and it turns to red or pink as they grow older, but only if they are “well fed”, since the carotenoid pigments from their food accumulate in the feathers giving them the red and pink colours. These substances are dangerous for many animals, but flamingos have a special metabolism, due to which they can process and assimilate them. The captive flamingos must be fed on special animals containing the respective pigments; otherwise, birds get discolored, and their plumage turns to white.

Colour has an important role in reproduction: the success in finding one partner depends on the colour intensity. Flamingos nest in pairs and build their cone-like shaped nests on the ground, in which they lay one egg.

They are social birds living in colonies that may number thousands of birds.

The four stamps of the issue present four out of the six species of flamingo, which are distinguished by an incredible elegance, slender constitution, and colorful plumage.

The Andean flamingo (Phoenicoparrus andinus), illustrated on the postage stamp with the face value of Lei 1.40, lives near the mountainous lakes from the Andes, in Peru, Argentina and Chile, often in mixed colonies made up of more South American species of flamingos. This is a vulnerable species threatened by the mining works conducted in the area (leading to water pollution), tourism and infrastructure development (disturbing the colonies) and the collecting of eggs by the locals.

The Chilean flamingo (Phoenicopterus chilensis), depicted on the postage stamp with the face value of Lei 1.70, nests in South America, in Ecuador, Peru, Chile, Argentina and eastern Brazil. It lives in lagoons and salty or alkali lakes. There are currently conservation programmes meant to protect this species threatened by the loss of habitats and water pollution.

The lesser flamingo (Phoeniconaias minor), represented on the postage stamp with the face value of Lei 7, lives in Sub-Saharan Africa and in the North-west of India. It is the smallest of all flamingo species (80-90 cm tall). Although it has the most numerous populations of all species of flamingos, it is however a near threatened species (according to the classification of International Union for Conservation of Nature), with populations declining mainly due to water pollution.

The pink flamingo (Phoenicopterus roseus), illustrated on the postage stamp with the face value of Lei 19.50, is the largest of all flamingo species (110–150 cm tall) and it has the widest spread; it lives in Africa, the Indian subcontinent, the Middle East and southern Europe. It may be seen sporadically in Romania as well, halting during migration for a short period of time in the Danube Delta, on the Black Sea coast or on the lakes in the south-eastern part of the country.

Romfilatelia thanks the “Grigore Antipa” National Museum of Natural History for the documentary support provided in the making of this stamp issue.

The Flamingo postage stamp issue will be available starting Wednesday, August 23th, 2021, in Romfilatelia stores in Bucharest, Bacău, Brașov, Cluj-Napoca, Iași, Timișoara, as well as in our online store: https://romfilatelia.ro/store /. It is completed by a “first day” envelope, four sheets of 28 stamps, four mini-sheets of 5 stamps with vignettes and a block of 4 undated stamps in the philatelic folder. 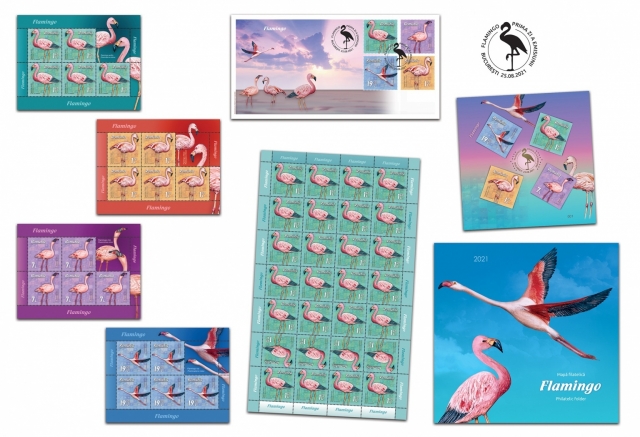 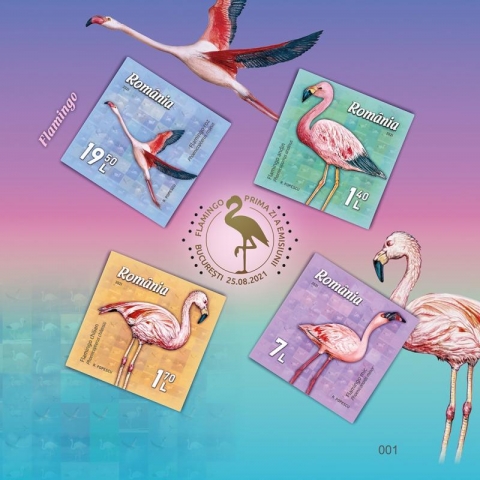 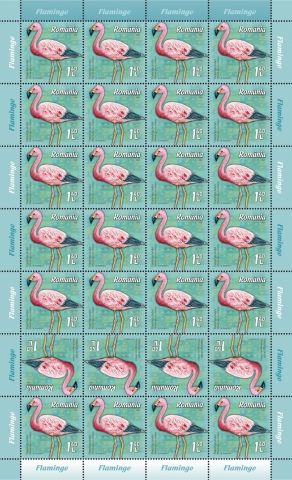 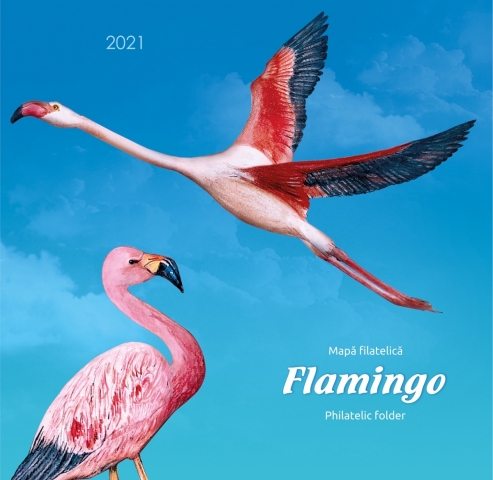 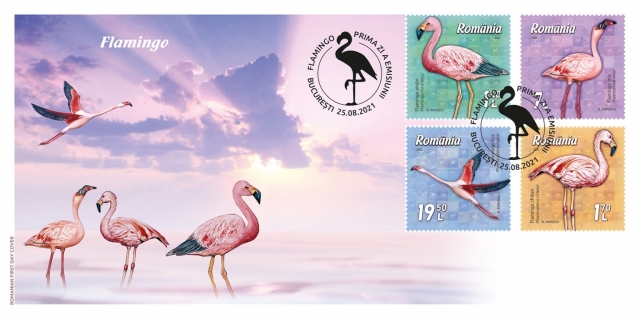 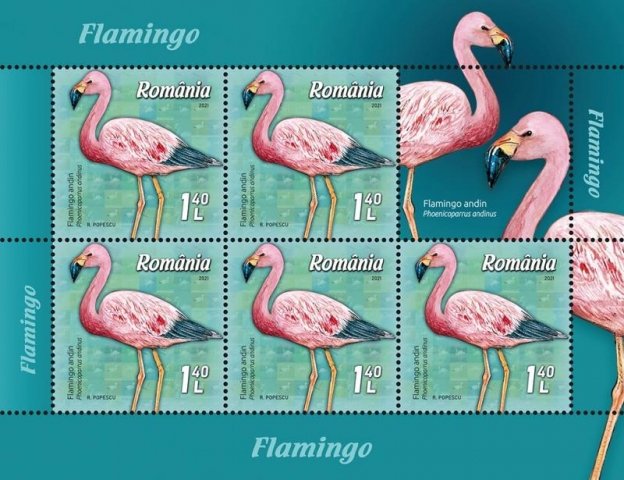 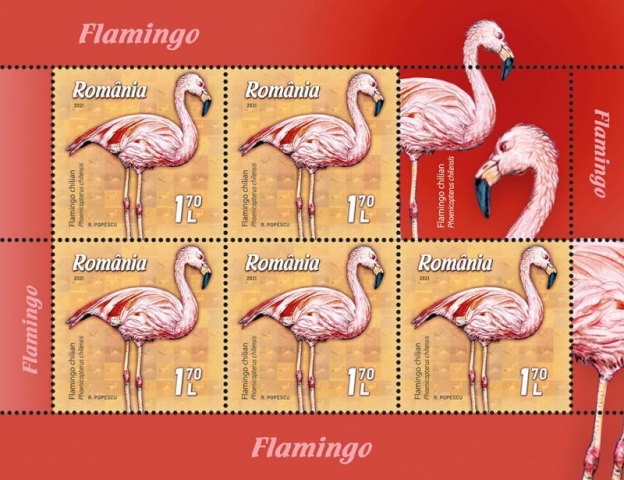 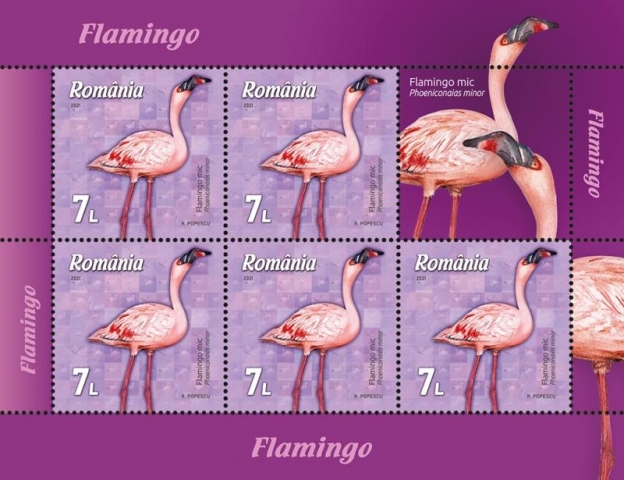 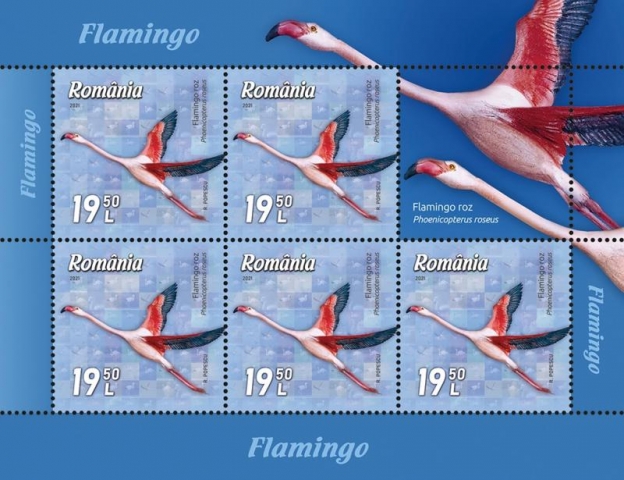 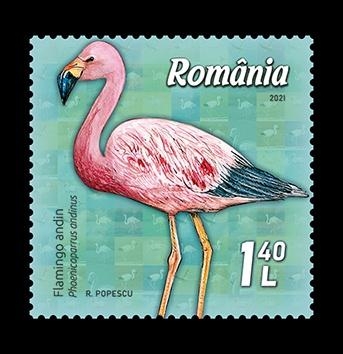 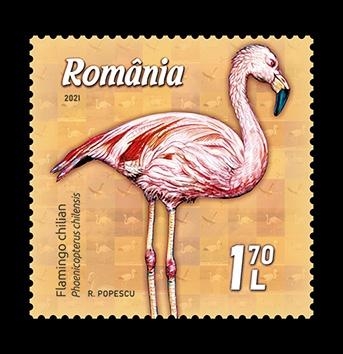 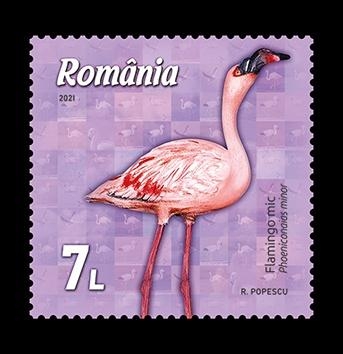 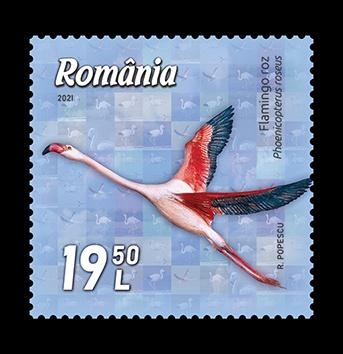