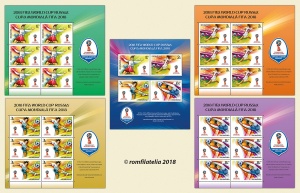 On the occasion of the 21st edition of the 2018 FIFA World Cup TM, Romfilatelia introduces into circulation the postage stamp issue dedicated to this competition, equally representing a joyful opportunity for both football fans and philatelists.

The four postage stamps of the issue, with a face value of Lei 1.70, Lei 2, Lei 3, respectively Lei 8.50, illustrate, in a stylized manner, the dynamics of a football game.

Considered a social phenomenon, football, the most popular sport in the world, watched by millions of people, is part of the team sports, which is based on a simple and accessible regulation.

FIFA World Cup TM is the most important football competition between the national teams of the FIFA member states, the world football governing body. The competition takes place in two stages: the preliminary stage (qualifications) and the final tournament, organized every four years.

The host country of the final tournament, played in the beginning of the summer for one month, is designated by FIFA, at least 4 years before.

Since the beginning of this international competition, two distinct trophies have been awarded, both in form and as a name. From 1930 until 1970, the Jules Rimet Trophy was awarded, and from 1974 the FIFA World Cup Trophy.

The current FIFA World Cup Trophy, created by the Italian sculptor Silvio Gazzaniga, is considered a true work of art. Made of 18-karat gold, it represents two stylized human figures, holding the Earth. For the safety of the trophy, the winning team receives a Gold-Plated Cup, the original remaining at FIFA headquarters in Zürich, Switzerland.

The first edition of the FIFA World Cup TM took place in 1930 in Uruguay, and the most recent in 2014, in Brazil.

This year, the final tournament will take place from 14th June to 15th July and will be hosted, for the first time in the history, by the Russian Federation. The event will be attended by 32 national teams from all continents, of which 14 European teams, 5 from South America, 3 from Central and North America, 5 African teams, 4 Asian and Australian teams. The draw took place at the State Kremlin Palace and was conducted with the support of nine former players, representing the host country and the eight world champion-countries in the history of the competition. Qualified countries were divided into groups as follows:

The opening match of the final tournament will be played at the Luzhniki Stadium in Moscow, between the host country, Russia, and Saudi Arabia. The final of the FIFA World CupTM will also take place here, on July 15th, 2018. 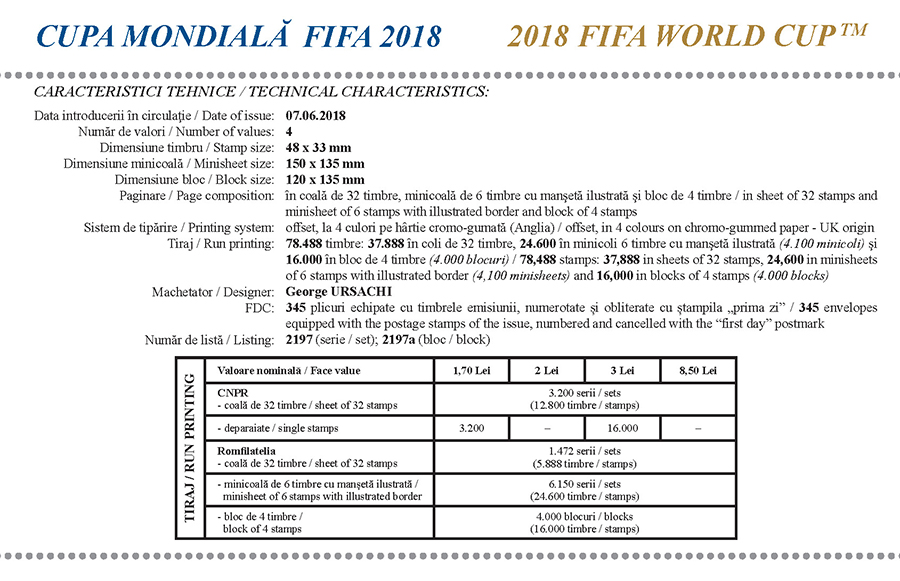