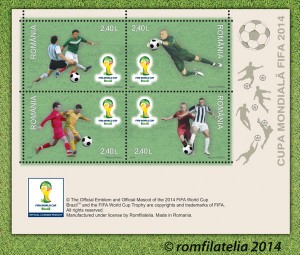 With the occasion of the 20th edition of the 2014 FIFA World CupTM, Romfilatelia introduces into circulation the postage stamps issue dedicated to this sports competition, taking place from June 12th to July 13th, 2014, in Brazil, and hosting 32 national teams from all the continents. The event represents an occasion of joy not only for football fans, but also for philatelists.

Brazil is the fifth country after Mexico, Italy, France and Germany which hosts the FIFA Football World Cup for the second time. The first edition to take place in this country was in 1950.

The opening match is marked by the meeting on the pitch between the teams of Brazil and Croatia, the schedule of the competition being filled with many matches between the great teams of the world.

This year’s FIFA World Cup will take place on 12 stadiums in 12 different cities, each of them hosting at least four matches. The opening match will take place on Arena de Sao Paulo in Sao Paulo, while the final will be played on the stadium Maracanã – Estàdio Jornalista Mário Filho de Janeiro.

The FIFA World Cup Trophy is made of gold and is offered to the winning country.

The “Jules Rimet Trophy” originally known as “Victory” (Goddess of victory), was designed by the French sculptor Abel la Fleur. In 1970, Brazil won outright this trophy, made of solid gold, and fixed on a green malachite base. But in 1983, the “Victory” trophy was stolen.

The FIFA World Cup Trophy was awarded for the first time in 1974. Although it was created before the year the “Victory” trophy was stolen, it is considered a replacement of this one. It is the creation of the Italian artist Silvio Gazzaniga, being made of 18 carat gold, and representing two human figures holding up the Earth. The current trophy was chosen among over fifty models, being considered a real masterpiece.

To ensure the security of the Trophy, the winners receive a replica which is plated with gold, the original cup itself remaining in possession of the International Federation of Football, at the headquarters of FIFA in Zürich, Switzerland. The current holder of the Trophy is Spain, the winner of the FIFA World Cup in 2010.

The logo of the 2014 tournament is entitled “Inspiration” and depicts three hands holding up the big Trophy. Moreover, the chosen colours, yellow and green, symbolize the worming and welcoming Brazil.

The drawing of lots for qualification took place at Marina da Glória – Rio de Janeiro, on July 30th, 2011. The hosting team, Brazil, is the national team having won most of the trophies, namely five finals that it won, being automatically qualified in the final tournament. The second place is occupied by Italy with four trophies, and the third place belongs to Germany with three trophies.

The 2014 FIFA World CupTM is the most important football competition, gathering with the occasion of these intensely disputed matches the world’s national football teams, qualified for this final tournament. The tournament takes place according to the rules governing the winning of a final trophy, the Cup of the game. The next editions, after the tournament in Brazil, will take place in the Russian Federation in 2018 and Qatar in 2022.

The 2014 FIFA World Cup postage stamps issue consists of four postage stamps with the same face value of lei 2.40. The stamps present the dynamic phases of a football game, depicting four moments of a match and combining the link between the messages of the images and the beauty of this team sport. 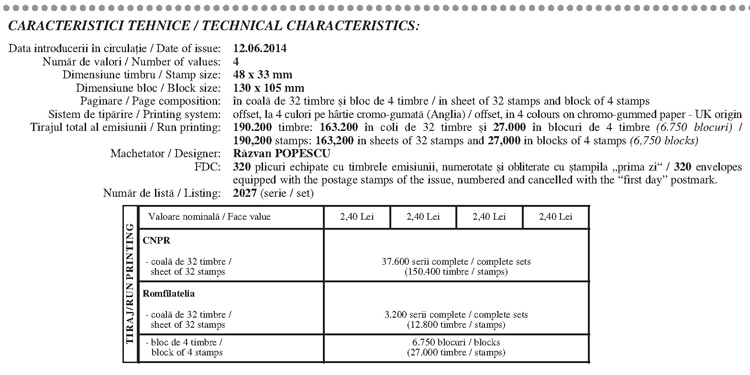