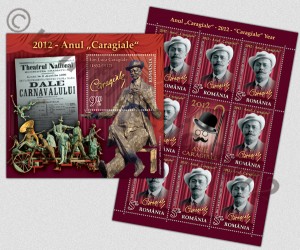 Born in 1852, as the descendent of an actors’ family, Caragiale was an excellent pamphleteer, short-story writer and journalist. During his life he collaborated with a great number of magazines and newspapers. In 1889, he set up “Moftul român” humoristic magazine. He was the director of the National Theatre of Bucharest between 1888 and 1889.

In his work, Caragiale chose his characters from all social domains, from politicians to people from justice, the small bourgeoisie, press, education, public clerks, rich people, and representatives of the modern society, as well as upstarts.

As a perfect painter, he managed to render the picturesque side ofBucharestand of the province of the late 19th century and the early 20th century, by taking us through modern drawing-rooms, breweries or through the tumult of the street.

The comicality, the dramatism and the fantasticalness define the essence of Caragiale’s literary work and outline the limits of the Romanian theatre from the viewpoint of topics, vision, style and typology of his creation.

Caragiale still exists, he is our contemporary, to the ones who are acting his plays every day…

In 1962, on the occasion of half-centennial of his death, on the recommendation of the World Peace Council (non-governmental organization, member of the United Nations), Ion Luca Caragiale was commemorated all over the world.

In the same year, atPloiesti, it was inaugurated “Ion Luca Caragiale”MemorialMuseum.

Caragiale’s plays will be present in the repertory of many theatres fromBucharest,Ploiesti, Cluj,Craiovastaged by highly appreciated Romanian theatre and film directors.

Joining the ample manifestations dedicated to this anniversary, the National Theatre of Bucharest will carry out this year “The complete literary work of Caragiale”.

During the National Theatre Festival, organized by the Romanian Association of Theatre Artists (UNITER) in the autumn of this year in Bucharest, and carried out under the name 2012 – “Caragiale” Year, there will be performed Caragiale’s plays this year on the stages of the Romanian theatres

In the last 10 years, within a worldwide cultural project unique in the history of the Romanian culture, more than 1,500 artists from 141 countries made atPloiestithe largest collection of portraits in the world of a universal culture personality, Ion Luca Caragiale.

Beside these cultural institutions involved in actions of paying homage to Caragiale, Romfilatelia introduces into circulation a postage stamps issue dedicated to this event 2012 – “Caragiale” Year.

On the postage stamp of the issue is illustrated the photo portrait of the great master.

The souvenir sheet of the issue illustrates, both in the image of the postage stamp and in its graphic composition, elements from the “Caragialiana” sculptural ensemble, placed in front of the “Ion Luca Caragiale” National Theatre, inBucharest, made in the year 2010 by Ioan Bolborea.

We kindly thank the National Museal Complex “The Royal Court” of Targoviste, the sculptor Ioan Bolborea and Mr. Emanuel Badescu, librarian within the Romanian Academy Library for the support granted in the accomplishment of this postage stamps issue.
Issue date: 2012-01-30 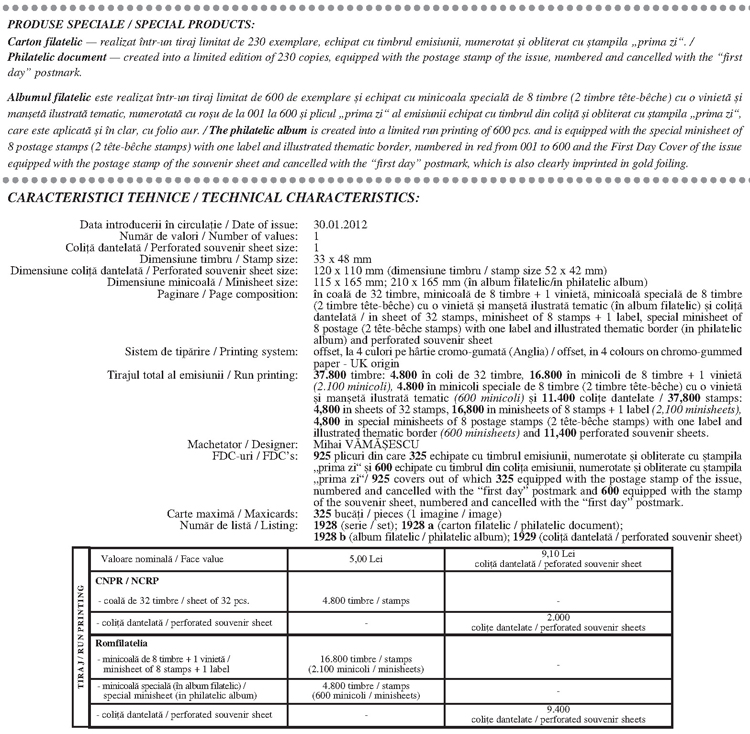