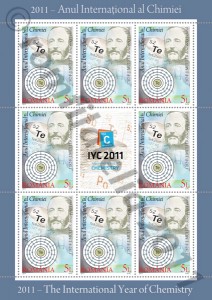 The United Nations Organization declared the year 2011 as “The International Year of Chemistry” (IYC), a year when are celebrated the achievements in chemistry and its contributions to the mankind evolution.

The United Nations Organization declared the year 2011 as “The International Year of Chemistry” (IYC), a year when are celebrated the achievements in chemistry and its contributions to the mankind evolution.

IYC 2011 is a IUPAC (International Union of Pure and Applied Chemistry) and UNESCO initiative.

This year, academies, institutes and chemistry societies worldwide will get involved in organizing national, regional and local activities aiming the awareness of the chemistry’s role in solving the problems and challenges of the present world.

Under the slogan “Chemistry – our life, our future”, the programme of the International Year of Chemistry will comprise a series of educational, interactive and entertaining activities that will take place all over the world. The goal is to attract young people towards this science and to make people aware of the role that chemistry plays in our life starting with gastronomy up to medicine and technology.

IYC is also an occasion to celebrate women’s contribution to the scientific field taking into account that in 2011 there are celebrated 100 years since Marie Curie received her second Nobel Prize, the one for Chemistry.

Within the manifestations related to the International Year of Chemistry, Romfilatelia introduces into circulation a postage stamps issue on this topic.

The graphic composition of the postage stamp of the issue contains the portrait of Franz Joseph Müller von Reichenstein, the discoverer of Tellurium, the only element entered into the Mendeleev Table directly from the Romanian territory.

Born in Sibiu, on 1 July 1740 (other sources indicate as his birth place, Poysdorf, Austria, on 4 October 1742), Franz Joseph Müller von Reichenstein studied philosophy and law in Vienna, and then technology, mining, mechanics, chemistry and mineralogy at the Royal Academy in Schemnitz (1763).

In 1768, he was promoted as a governmental specialist for surveys in auriferous issues (Markscheider), inSouthern Hungary.

In 1770, he was co-opted into a governmental committee dealing with mining problems in Banat, and then, due to his merits, he was appointed manager of mines and the syderurgic industry inBanat.

In 1782, Müller made researches on a mysterious mineral discovered in early 18th century in Sacaramb area. Since it could not be separated from the gold, this mineral was called “aurum paradoxum”. After he had discussed with illustrious chemists of the time (the Swedish-Bergmanand Berzelius and the German-Klaproth), he noticed that the gold from the ore was combined with a new element that he called “Tellurium”, and this was the 52nd element registered in the famous Mendeleev’s Table.

Due to his special merits, F. J. Müller was ennobled by the Emperor Franz Joseph II in 1788 and raised to the rank of Knight of theImperial Courtwith the title “von Reichenstein”.

In 1795, he was appointed General Inspector of the Mineand Metallurgy Industry from Transylvania and in 1802 he was asked to come toViennafromSibiuin order to be designated as counselor at the Emperor’s Court, an office that he held until 1818.

We kindly thank Academician Ionel HAIDUC, the President of the Romanian Academy, as well as to IUPAC (International Union of Pure and Applied Chemistry) for the support granted in the achieving of this postage stamps issue. 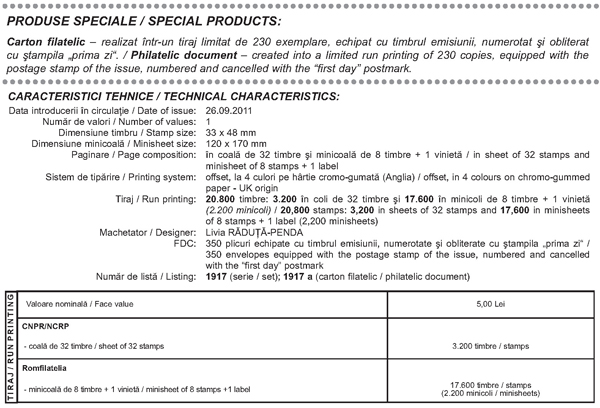