By Decree No. 765 of July 4th/16th, 1864, ruler Alexandru Ioan Cuza enacted the founding act of theUniversityofBucharest. At the time, Mihail Kogalniceanu was Prime Minister, and the poet Dimitrie Bolintineanu was the Minister in charge of Public Instruction.

It should be noted that according to the Public Instruction Act, primary education was becoming general, free and compulsory. The University was opened however later than in other countries (Bologna: 1111, Valencia: 1212, Vienna: 1365, Petersburg:1819), the Romanian ruler having attended university courses inParis,PaviaandBologna.

The term University aptly denotes the character of the institution, as the medieval Latin meaning of the term is community (Latin term universitas); at its opening, theUniversity ofBucharest joins together the professors and students of the three already existing faculties: the Faculty of Law, the Faculty of Letters and Philosophy, and the Faculty of Sciences.

The University was metaphorically named everywhere Alma Mater (nourishing mother), the term being used by Latin poets to express the idea of homeland. The University of Bucharest has stood for 150 years as a fundamental institution for the cultural, social and political life in our country. Through its valuable students and professors, it was also represented abroad: inFrance, at the Sorbonne, by Nicolae Iorga and at the French Academy by great writers such as Emil Cioran and Eugen Ionescu, in Spain by George Uscatescu, Mircea Eliade often participating as a lecturer in different famous universities.

The Palace of the University was completed on December 14th, 1869, becoming not only an imposing architectural building endowed with administrative powers, but also a strong community (Universitas) established between mentors and disciples.

Among the rectors that led the University, many of them remained known as senior political figures, such as Gheorghe Costaforu (professor at the Faculty of Law, two times appointed minister), Vasile Boerescu (Law professor and Foreign Minister), Titu Maiorescu (aesthetician, literary critic, member of the Parliament, minister and prime minister), Nicolae Iorga (historian, writer, academic, minister and prime minister), Constantin Stoicescu (jurist, member of the Parliament and minister).

After Communism was installed inRomania, the Education Reform Act applied the Soviet model of higher education, together with an extensive reorganisation of theUniversityofBucharestand establishment of some new institutes subordinated to the Academy of the People’s Republic ofRomania.

With the general renewal process, starting with the 1990s, theUniversityofBucharestwitnessed new development criteria conferred by the 19 faculties, over 30,000 students and more than 3000 permanent teaching staff and associates.

The postage stamp of the series depicts a vintage picture of the University of Bucharest, having in addition to the current facade the image of the eagle carved in Rusciuk stone, and the allegory with thematic topic of the goddess Minerva. The postage stamp of the perforated souvenir sheet depicts the general architectural project of the University painted in watercolour by its architect Alexandru Orascu. Besides the postage stamp, a label depicts the portrait of Gheorghe Costaforu, the first rector of the University. The background of the souvenir sheet adds to the graphic composition some architectural elements and the facsimile of the founding act.

Romfilatelia thanks the University of Bucharest, the National Bank of Romania and the Romanian Presidency – Chancery of Orders for the documentary and photographic support granted in the accomplishment of this issue of postage stamps.
Issue date: 2014-07-16 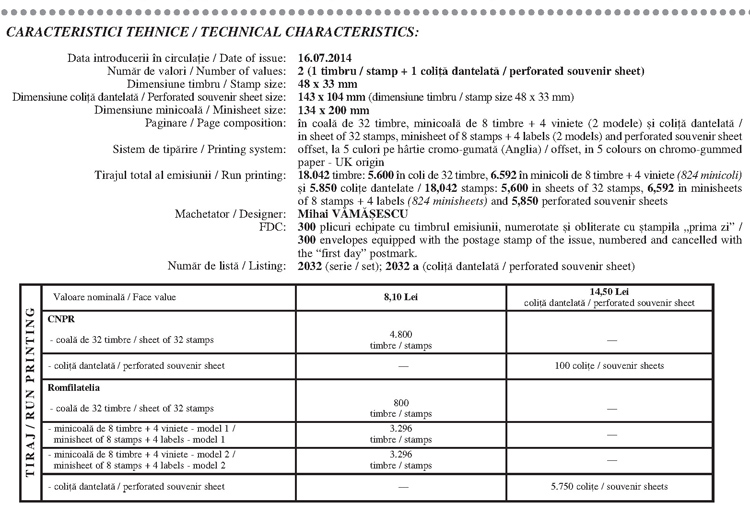