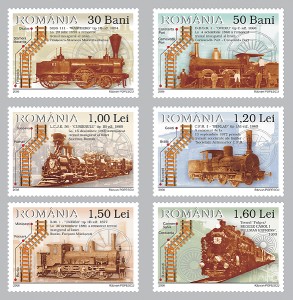 150 years ago, between Oraviţa and Baziaş, the first railway line ever built on the current Romanian territory was put into service, for passengers transport.
To mark this event, Romfilatelia, the specialized company in issuing and trading Romanian postage stamps, introduces into circulation the philatelic issue 150 YEARS SINCE THE INAUGURATION OF THE FIRST RAILWAY LINE OF ROMANIA (ORAVIŢA – BAZIAŞ, 1856 – 2006)
The first railway in the world for passenger transport was inaugurated in England, on the 15th of September 1830, between Liverpool and Manchester, after the inauguration, in 1825, of the “coal line” between Stokton and Darlington. This is how the technical railway adventure began, that was about to change the life and existential condition of the inhabitants of the planet.
In 1845, the manager of the mining district of Banat Mountains, Gustav Granzsteim, addressed a memoir to the Chief of the Administration of Imperial Assets of Vienna, by which he drew attention on the economic importance of coal extraction from the Anina area. From here, the coal reached Baziaş to supply the ships navigating on the Danube.
Between 1845 and 1846, the Austrian state confiscated all the private coal mines of Anina Mountains. At the end of year 1846, the Chancellery of Vienna approved the project of a horse traction railway for coal transport from Anina to Oraviţa and of a normal railway from Oraviţa to Baziaş harbor on the Danube.
On the 20th August 1854, the Oraviţa-Baziaş line was inaugurated, 62.5 Km long, only for coal transport; hence the name of “Coalmen line”. In 1855, it was taken over by “Royal and Imperial Privileged Society of the State Austrian Railways” (St.E.G.).
After certain improvements, on the 1st of November 1856, it was also open for passengers transport.
The postage stamp with the face value of RON 0.30 presents the StEG 111 engine – “Wartberg” type 1B-n2, John Haswell, Vienna, 1854.
On the 20th of July 1858, it trailed the inaugural train of the Timişoara-Stamora Moraviţa-Baziaş line. The train was made of 11 passengers carriages and 1 luggage wagon. From the Baziaş harbor, the passengers were able to continue their trip on the Danube, on ships towards Orşova, Giurgiu, Cernavodă, Odessa and Constantinopol.
The postage stamp with the face value of RON 0.50 presents the D.B.S.R. 1 engine – “Ovidiu”, type C-n2, Beyer, Peacock, Manchester, 1860. Together with the D.B.S.R. 2 – “Tomis”, it trailed the first trains of the Dobrujan line Cernavodă Harbor – Constanţa Harbor. The railway traffic between the two harbors determined the creation, in 1865, of a local service called “Local Post” that established the connection both between the two terminus points of the line, and with the post service of the Austrian maritime company “Lloyd”. For the prepayment of the post transport on this line, the D.B.S.R.Company – (Danube and Black Sea Railway) issued in 1867 its own stamp of 20 cents, which was the first European postage stamp on a railway theme. The drawing of the stamp shows a train entering the Constanţa harbor.
The postage stamp with the face value of RON 1.00 presents the L.C.J.E. 56 engine – “Curierulu”, type 1B-n2, Canada Works, Birkenhead 1869,
together with the saloon carriage of King Charles I, on the occasion of his visit to Iaşi (7 October 1889).
This engine was part of the L.C.J.E. 49-57 series which was dispatched by the Britannic companies Neilson & Co., Glasgow and Birkenhead, which trailed inaugural trains of the Suceava – Roman, Paşcani – Iaşi and Vereşti- Botoşani lines.
The postage stamp with the face value of RON 1.20 presents the CFR 1 engine -“Berlad”, type 1A1-n2, Georg Egestorff, Hannover, 1869. This engine was part of the CFR 1-20 series which trailed, starting September 13th 1872, the first fast trains of the CFR Associates Company.
The postage stamp with the face value of RON 1.50 presents the B.M.1 engine – “Unirea” type 1B-n2, bay.B IX, J.A.Maffei, München, 1877. This Bavarian pattern of engines for fast trains was dispatched in 104 units. Four of them were used on the temporary military line Frăţeşti – Zimnicea, between 1877 and 1878. After the end of the Independence War, they were purchased by the Romanian Government and distributed to the Buzău-Mărăşeşti line, back then under construction, where they received the names and numbers of BM 1-“Unirea” (Union), BM 2-“Independenţa” (Independence), BM 3-“Şoimul” (Hawk) and BM 4-“Săgeata” (Arrow). The engine M1-“Unirea” trailed on the 30th October 1881 the special inaugural train between Buzau and Marasesti, the first railway designed and built entirely by Romanians. Between 1883 and 1886, due to the maximum traffic speed of 92 km/h, these engines were the quickest in the CFR network and they trailed the “Orient Express”.
The postage stamp with the face value of RON 1.60 presents the train “Fulger” (Lightning) / “King Charles I Pullman Express”, 1933. This luxury train circulated on the North Bucharest – Constanţa route (extended during summer up to Carmen Sylva). It was put into service on the 22nd of May 1933. It was composed of 3 Pullmann saloon carriages and 2 post and luggage wagons and it was trailed by the PACIFIC CFR 231.041 type 2C1-h4 engine. During the interwar period, another two famous trains circulated on the CFR lines: “Carpaţi Pullman Express” (North Bucharest – Braşov and back) and “Dunărea Pullmann Express” (North Bucharest – Galaţi and back). Please note that, during the interwar period, the “Pullman” luxury trains only circulated in eight European countries (France, Italy, Spain, Austria, Holland, Romania, Switzerland and Belgium) and to Egypt.
The perforated souvenir sheet of the issue (with the face value of RON 2.20) presents the total view of the Oraviţa station, with the passenger
building in 1863, the engine shed, two coal trains, the return plate on which a steam engine StEG 500 – STEYERDORF type CB-n2F is stationary, and in the back a type 2A-n2 (Norris model) engine. StEG 500 -STEYERDORF was build based on the designs of the Austrian engineer Pius Fink specially for the Oraviţa – Anina line (inaugurated on December 15th 1863), the first mountain railway of Romania and one of the first in Europe. Due to its constructive originality, this engine was presented in two universal exhibitions, in 1862 in London and in 1867 in Paris.
The documentation and picturing of the philatelic issue has been done with the support of Mr. eng. Ilie Popescu, of S.N.T.F.C. – “CFR CALATORI” S.A. (Ministry of Transport, Constructions and Tourism).