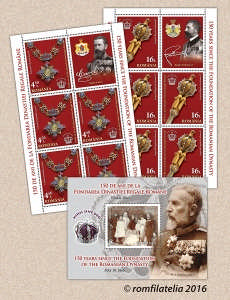 2016 represents an anniversary year for the Romanian Royal Dynasty, not only due to the 150th anniversary of its foundation, but also due to the anniversary of other events which have changed the course of Romania’s royal history, specifically one century since Romania’s entry into World War One, 95 years from the birth of His Majesty King Michael I, and also 20 years from the marriage of Her Royal Highness Margareta, Custodian of the Romanian Crown with His Royal Highness Prince Radu of Romania.

In this context, Romfilatelia joins the royal anniversaries, through a postage stamp issue with the topic 150 YEARS SINCE THE FOUNDATION OF THE ROMANIAN DYNASTY, which illustrates the symbols and the first three generations of the Romanian Royal Family.

Thus, the postage stamp with the face value of lei 4.50 presents a detail of the Collar of the Order of Carol I. The Order of Carol I was established on 10 May 1906, on the occasion of the 40th jubilee of King Carol I’s reign, being the highest decoration of Romania since its establishment and up to 1947. It was reinstated by King Michael in 2005 as a dynastic order. Throughout its existence, it was awarded to the greatest personalities, who have contributed significantly to the development of modern Romania. Among those decorated with the Collar of the Order one finds Gheorghe G. Cantacuzino, Dimitrie Sturdza, Petre P. Carp, Titu Maiorescu, Ion I. C. Bratianu, Mihail Pherekyde, but also most of the sovereigns who between 1878 and 1881 had an essential role in the recognition of Romania’s national sovereignty and its new status as a Kingdom. The motto of the Order is “Through steadfastness to victory” and on its reverse the years 1866 and 1906 are rememorated. The chain of the Collar is composed of alternating medallions, representing the coats-of-arms of the Old Kingdom (Wallachia, Moldavia, Oltenia and Dobrudja), as well as the quartered shield of the Dynasty. The medallions are linked through the cipher of King Carol I, enamelled in red.

The postage stamp with the face value of lei 16.00 presents a detail of King Ferdinand I’s Sceptre. The Sceptre was created in 1920, through a public subscription, being dedicated to “King Ferdinand I, the King of all Romanians, being given this sceptre by his people as a reward for his diligence and good leadership of the country between 1916 and 1919”. In its upper side the statues of four peasant ladies are reproduced, dressed in national costume, representing the Old Kingdom, Transylvania, Bessarabia and Bukovina, and on its top there is the head of the cross-bearing eagle. The sceptre is made of gold, and embellished with precious stones.

The stamp of the souvenir sheet, with the face value of lei 8.00, represents the first three generations of the Romanian Royal Family. From left to right, one can distinguish Crown Prince Ferdinand, Princess Elisabeta of Romania (later Queen of Greece), Queen Elisabeta of Romania, Prince Carol, Princess Marie of Romania (later Queen of Yugoslavia), Prince Nicholas of Romania, Princess Marie (later Queen Marie of Romania) and King Carol I. This photograph, taken at the moment when the dynastic crisis (provoked by the death of King Carol I’s only child) had been solved, portrays not only three generations of the Royal Family, with a profound historical impact on Romania, but also, through the Royal Princesses, the Romanian Royal Family’s links with Europe’s dynasties.

The sleeve of the souvenir sheet presents the portrait of King Carol I, in uniform and with decorations, as well as the steel Crown of King Carol I, together with the motto of the Royal House: Nihil Sine Deo.

Romfilatelia thanks the Royal House of Romania for the documentary support offered in the creation of this postage stamp issue.