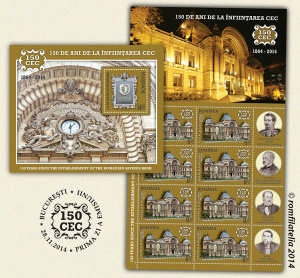 150 years ago, among Ruler Alexandru Ioan Cuza’s initiatives to strengthen the young state of the United Principalities, was also that of putting order in the public finances of the country. Thus, as a result of a project belonging to Nicolae Rosetti-Balanescu to establish a Saving House (published in 1845 and inspired by the statutes of saving houses in France and the one in Brasov founded in 1835), Ruler Cuza sanctioned the law creating the Deposits and Consignments House on November 24th, 1864.

The Romanian Savings Bank continues nowadays the activities initiated by the first public credit institution in Romania and those conducted since 1881 by the most important savings home that worked within the Romanian banking system – the Saving House – converted in 1932 in the Savings and Postal Bonds National House, abbreviated in Romanian CEC.

The cornerstone of the Palace of the Romanian Savings Bank or the Palace of the Deposits, Consignements and Saving House was set in 1897, in the presence of King Carol I of Romania and Queen Elizabeta. Before 1875, on that place one could find the monastry and the inn ”St. John the Great”, whose settlements, dating from the 16th century, were restored by Constantin Brancoveanu between 1702-1703, being demolished in 1875 due to the state of degradation in which they were. The current building was built erected the demolition of the first headquarters of the Deposit House.

Made by architect Paul Gottereau with specific elements of French architecture characteristic to late 19th century, the Palace building was completed in 1900. Built in an eclectic style, it ends with a dome of glass and metal, and the entrance is crowned by a semicircular pediment, supported by a pair of columns following a composite style. The four corner volumes, decorated gables and flags, are covered by Renaissance domes. A much larger dome covers the central hall of the building, while the judicious decoration of the facades and balance of the integral make this palace an interesting architectural monument of the city.

Romfilatelia thanks the Romanian Savings Bank and Mr. Emanuel Badescu for the documentary and photographic support granted in the accomplishment of this postage stamp issue.
Issue date: 2014-11-28 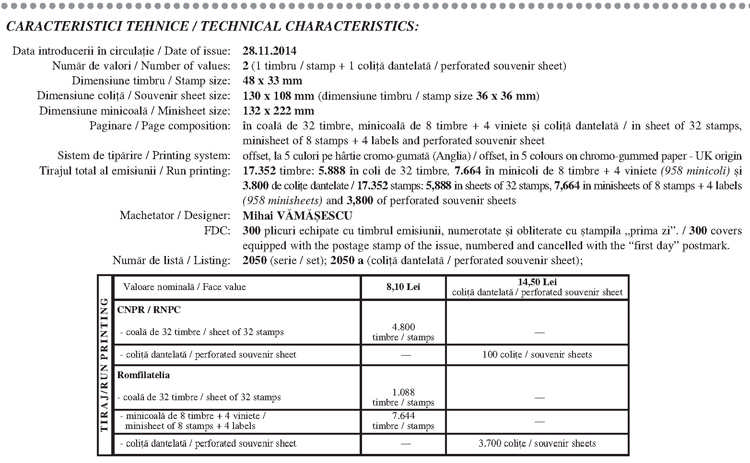