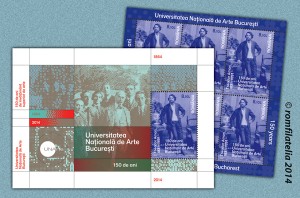 The tradition of the University of National Arts in Bucharest goes down to 1859, when complex and remarkable personalities, such as Theodor Aman and Gheorghe Tattarescu started to write a series of memoirs to found an institution of arts education, inspired by the Parisian model.

With the occasion of the 150-year anniversary since the signing in 1864, by Ruler Alexandru Ioan Cuza, of the decree establishing the School of Belle Arte in Bucharest, Romfilatelia introduces into circulation the postage stamps issue: 150 years since the establishment of the National University of Arts.

Recalling the first years of the institution will offer an example of the devotion showed by those artists who, so many times, sacrificed the time they had for the work of art they were preparing in that moment, in the inspiring silence of their workshop, to bring contribution to the building of another grandiose and thorough work, with national importance and perennial value: the School of Belle Arte.

Under the leadership of Aman, the school was provided with an appropriate structure, and after, under the guidance of George Demetrescu Mirea, its academic attire was consolidated, while the educational programmes offered became more diverse by including decorative arts, along with traditional “major arts”.

In 1930, the School finally achieves a new regulation, having a new rector for nearly a year then, Camil Ressu, and a new name: The Special School of Fine Arts.

Ressu was then elected as the first rector, leading the destinies of the Academy of Fine Arts until 1941.

The traditional organisation of arts education was bowled over by the reform of the Communist regime imposed in 1948, these changes leading to the creation of the hybrid Institute of Arts, bringing together the Faculties of Music, Theatre, Choreography and Fine Arts.

The autonomy will be quickly regained after founding, in 1950, the Institute of Fine Arts “Nicolae Grigorescu”, an institution which, along the following decades, will be able to maintain a proper posture to its mission, its rectors leading a policy of attracting those representative figures of the artistic life in the interwar period and the first post-war decades.

An important aspect of the 8th decade, in the history of the Institute of Fine Arts, is the inauguration of new study sections and academic programmes.

The Institute of Fine Arts “Nicolae Grigorescu” started, from the early days of 1990, a phase of structural reforms given the new context marked by the freedom of speech.

In the same year, the name of the Institute of Fine Arts “Nicolae Grigorescu” will become the Academy of Arts.

In 1998, the Academy of Arts was accredited as university, according to a new statute, the duration of studies being reduced to four years. Then, in 2002, the University of Arts received the title of National University, being therefore certified the level of excellence achieved after a century and half of educational experiments and commitment of many professors who were at the same time prestigious artists and art historians. This title also certifies the important place that exponents of many generations of graduates were gradually achieving on the national and international artistic stage.

Among the remarkable personalities of the artistic stage whose destiny is connected to the University of National Arts, either as former professors or students, we can proudly reveal the following names: Theodor Aman, Constantin Brancusi, Victor Brauner, Stefan Luchian, Dimitrie Paciurea, Gheorghe Petrascu.

The National University of Arts has engaged in a process of assimilation of a new communication pattern. The elements that highlight within this transformation process are the tradition of a good reputation, the West-European technical school next to which is also guarded the Byzantine tradition, future concerns being related to the training of the teaching staff that would contribute to the reform of the educational system within the school, being therefore capable of educating and shaping children and young people in the spirit of creative freedom, appreciation of values and works of art.

The postage stamp of the souvenir sheet of the issue, with the face value of lei 8.10, depicts Theodor Aman, one of the founders of academic art education in Bucharest.

This image shows Aman as a mature man, around the age of 50, having a casual attitude while backing a carved table. We can recognise in the background the props specific to photography workshops in the second half of the 19th century, with column and decorative detail-shaped cardboard patterns, that complement the composition.

Aman is the first Romanian artist who graduated Ecole des Beaux – Arts,Paris, becoming the modeller of modern artistic life inBucharest, and the promoter of the Exbition of the Living Artists.

On the border of the souvenir sheet is depicted an old image of the workshop belonging to the great master George Demetrescu Mirea, which shows the painter (who was also a professor) in the middle of his students attending his painting class, in 1921. He was the head of the painting department, professor with full rights and director of theSchool ofFine Arts inBucharest.

Romfilatelia thanks the National University of Arts in Bucharest for the documentary support granted in the accomplishment of this postage stamps issue.
Issue date: 2014-05-28 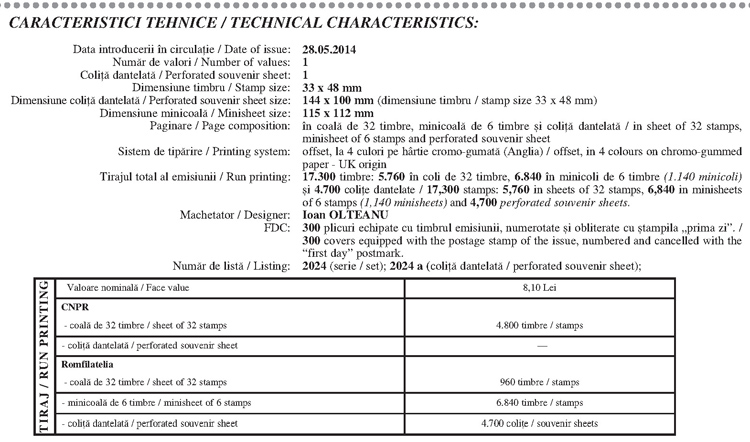