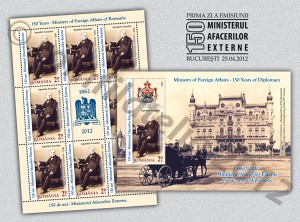 The beginning of Romanian diplomacy, acknowledged as such in official documents, dates back to the Middle Ages. During the reign of Stephen the Great (Ştefan cel Mare), the Ruler’s messenger, Ioan Tamblac, conducted diplomatic missions of paramount importance in Venice and Vatican.

In the second half of the 17th century, the Moldavian chronicler Miron Costin (1633-1691) carried out a diligent diplomatic activity for Ruler Stefan Petriceicu, conducting negotiations on his behalf with the King of Poland, Jan Sobieski and with the Ottoman Sultan Mehmed IV.

Another outstanding Romanian diplomat was the great scholar Nicolae Milescu Spataru (1636-1708). He was the representative of Ruler Grigore Ghica in Constantinople and conducted diplomatic missions in Poland and Sweden. However, he is best known for his journey to Siberia, Mongolia and China(1675-1678).

A significant moment relates to the establishment of the central institution designed to develop and promote the foreign policy – the State Secretariat or Department of Foreign Affairs, the foundations of which were laid in 1830 and 1831 through the Organic Regulations of Moldavia and Wallachia. The first Ministers of Foreign Affairs were Nicolae Cantacuzino in Wallachia and Prince Nicolae Sutu in Moldavia.

The Wallachian Revolution of 1848 was also aimed at enhancing the central institution that promoted of the Romanian foreign policy – the State Secretariat, which would then become the Ministry of Foreign Affairs.

The establishment of the Ministry of Foreign Affairs of the United Principalities by the Royal Decree of 27 July/8 August 1862 marked the beginning of a new stage in the modern Romanian state’s relations with the European states.

During the reign of Alexandru Ioan Cuza, the diplomatic agency in Constantinople was reorganised and new diplomatic agencies were established in Paris (1860) and Belgrade (1863).

The Ministry was reorganised under the Organic Law of 15 March 1873, and new Romanian diplomatic agencies were established in Vienna, Berlin, Rome and Sankt Petersburg.

Romania’s Independence as a State, obtained in 1877-1878, was equally due to the heroism of the Romanian army on the battlefield and to the persistent and brave actions of the young Romanian diplomacy to determine the Great Powers to acknowledge that state of affairs, between June 1878 and 20 February 1880.

The result of those efforts was a success: three of the Great Powers, namely Russia, Austria-Hungary and the Ottoman Empire were quick to recognise, in the autumn of 1878, an independent and sovereign Romania, with which they established proper diplomatic relations at the level of Legations headed by envoys extraordinary and ministers plenipotentiary. The other three big European states, i.e. Great Britain, Germany and France, would follow suit a little later, on the 8/20 February 1880.

Romania’s joining World War I in August 1916, on the opposite camp – that of the Triple Entente, aimed at accomplishing the third fundamental goal of the Romanians – the Union of Transylvania and Romania and the accomplishment of Greater Romania, a dream come true on the 1st of December 1918. The bravery of the Romanian army on the battlefield was successfully followed by the actions of the Romanian diplomats in 1919-1920 at the Paris(Versailles) Peace Conference and by the undeniable contribution of Queen Marie of Romania, who succeeded in obtaining the recognition of Greater Romania by the representatives of the Great Powers.

The interwar period (1919-1939) was marked by a peak in the international assertion of the Romanian diplomacy, brilliantly represented by Nicolae Titulescu, Grigore Gafencu, Vespasian Pella, Prince Dimitrie Ghika, Nicolae Petrescu-Comnen, I.G. Duca, Raoul Bossy, Constantin Antoniade and many others.

It is of interest to note that, for two decades, Nicolae Titulescu, a man of great culture, was the time’s most prestigious personality in international political life. In 1930 and 1931 Nicolae Titulescu was elected twice President of the League of Nations.

Romania’s forced inclusion on the communist orbit at the end of the war, for almost 45 years, also impacted on the Romanian career diplomacy, which was subjected to a ruthless purification process based on political criteria, between 1947 and 1948.

Currently, Romania, as a member of the European Union and NATO, sees both its security interests and its desire for international cooperation fulfilled, the remembrance of a past of strivings, victories and failures being an opportunity for meditation and providing teachings to anyone who takes the time to understand it.

In 2012, when it is “150 years since the establishment of the Ministry of Foreign Affairs”, Romfilatelia introduces into circulation a postage stamps issue dedicated precisely to this anniversary.

We would like to thank the Ministry of Foreign Affairs for the support granted in the accomplishment of this postage stamps issue. 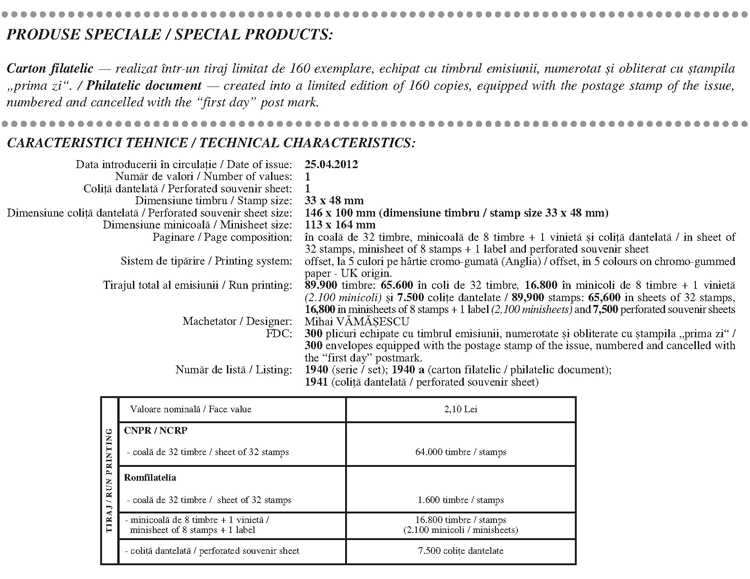