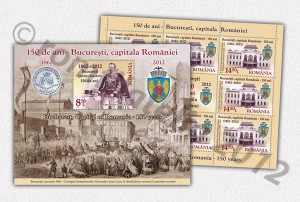 One century and a half ago,Bucharestbecame the capital of our country.

On the occasion of this anniversary, Romfilatelia introduces into circulation the postage stamps issue “150 Years – Bucharest, Capital of Romania”.

“Bucharest has been for centuries destined to be the capital of Romania. Then, being close to the main artery of trade, of the United Principalities wealth, the Danube – on the long way of the West towards the East– having a numerous, compact and mostly Romanian population, Bucharest is the only city including the most powerful element of a country – the middle class. There is nowhere else in Romania a larger light centre, a population with more national and liberal aspiration and an independent public spirit. Nowhere else could the public opinion have developed and reign longer than in Bucharest.” (Mihail Kogalniceanu, 1859)

After the Union on 24th of January 1859, the numerous negotiations with the Ottoman Empire ended, in November 1861, with the recognition of theUnionof the Principalities as a single state, with the approval of the guaranteeing powers, but only during Alexandru Ioan Cuza’s lifetime.

The Proclamation of 11th of December 1861 informed the Principality population on this first progress achieved. After this moment, the two Elective Assemblies merge in January 1862, in Bucharest, into a single one and the two governments resign in order to allow the formation of a single Government, the first government of Romania, the name under which the territory of the United Principalities has been known ever since.

During this meeting is decided thatBucharestbecome the capital of the country.

Since 1857,Bucharestwas the first city in the world which had the streets lit by gas lamps and foreign travellers considered it to be a city of contrasts.

Many transformations took place, mainly during 1863-1865, when Mihail Kogalniceanu was the Prime Minister. The arrangement of the Botanical Garden begins and, among others, the elementary schools “Gheorghe Lazar” and “Matei Basarab” are established. In 1864, the University and the National School of Fine Arts are established.

The 1867 Agrarian and Election Laws represented real and important transformations in the social life of the country. The Public Instruction Law of 25th of November1864 laid the foundations, as depicted in the legal provisions, of the Romanian education system.

The developments occurred in the social life of the new state originally established in 1862 under the name Romania have been endorsed afterwards by Prince Carol I, during whose reign, Romania, having become a Kingdom in 1881, gains rights equal to those of long-standing European states.

Until the First World War, new boulevards and neighbourhoods appear inBucharest, as well as new parks and monumental cultural and administrative buildings, the Parisian architecture harmoniously blending with the Neo-Romanian (Neo-Branconvenesc) one, thus, turning this metropolis located at the crossroads between the West and the East into the“Little Paris of the Balkans”.

We would like to thank the Bucharest History and Art Museum and Mr. Emanuel Badescu, librarian within the Romanian Academy Library for the support granted in the accomplishment of this postage stamps issue. 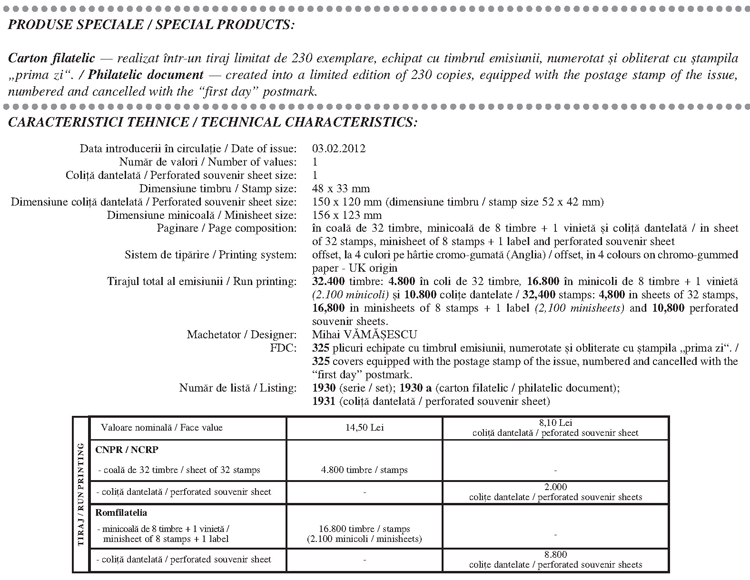