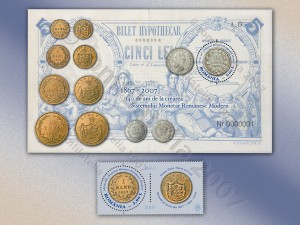 Romfilatelia, the specialized company in editing and trading
Romanian postage stamps will now introduce into circulation the stamps
issue 140 years since the establishment of the Modern Romanian
Monetary System.During the first half of the 19th century, on the territory of present day
Romania, currency flow was made up of a large variety of coins, out of
which the most well known were the French napoleon, pound, Austrian
ducat, Ottoman lira, along with other different Turkish, Austrian, and
Russian coins. The presence of such a large number of coins  more than
80  on the territory of Moldavia and the Romanian Country in the middle
of the 19th century has brought about projects for the development of a
new integrated national monetary system.
The first attempts to set the foundation of a national monetary system
were brought about by the Moldavian ruler Alexandru Ioan Cuza. Cuzas
efforts finally showed up during his last reign year.
Although initially, through the acknowledgement of the new ruler
Carol I, the Turkish government would neither allow him currency
issuance nor the decoration award, as witnessed by the letter dated
October 1866, addressed to the Romanian Government and bearing the
signature of the Great Vizier in which the Sublime Porte reconsiders the
currency issue allowing Principalities to issue their own currency on
condition that it bears the imprint of the Ottoman Empire (the half moon
or the stars half moon). One month later, by means of a new letter, the
Sublime Porte would give up the claim for the bronze divisionary coin
only. Taking advantage of the accomplishment, the Bratianu government
would rephrase Cuzas monetary law in a new monetary bill submitting
it to Parliaments approval.
Accordingly, after 8 years from the Principalities Union in 1859, on
April 22, 1867, the Law for the establishment of a national monetary
system was finally passed.
Taking over the bimetallist monetary system of the Latin Union
(convention concluded in 1865 between France, Belgium, Switzerland
and Italy), the law made provisions on the issuance of the gold coins (of
20, 10, and 5 lei), silver (2 lei, 1 leu, and 50 bani) and bronze (10, 5, 2,
and 1 ban). The law also stipulated that, out of financial reasons, only the
bronze coins were to be issued at that time and they were indeed
immediately issued by the Watt & Co and Heaton in Birmingham
(England) mints.
Tempering, for the moment, gold and silver coins showing Turkish
suzerainty marks issuance, Bratianu had a double goal in mind: the set
up of a national mint, that was to be accomplished in 1870, and issuance
of coins showing the effigy of the ruler  mark of state sovereignty.
In 1868 the first gold coin was issued (the 20 lei coin), while in 1870
the first silver coin sees the light of the day. Because of
monetary-induced deficits having taken place during previous years, in
1877, the first banknotes was issued, the so called mortgage money coins
that had a mandatory exchange rate with all public cashiers. Paper
money with the face value of 5, 10, 20, 50, 100 and 500 lei was issued.
Mortgage money was, in time, until 1890, withdrawn from the market
and they were replaced with bank-issued money. Although, as time
went by, the structure of the monetary system has suffered numerous
modifications, the leu has, up to the present day, remained the
national currency of Romania.
The stamp with face value of RON 3.90, exhibits the obverse and the
reverse of the first 1 Ban coin (bronze), issued in 1867, by the Heaton
Birmingham Mint (England).
The stamp of the perforated souvenir sheet with a face value of
RON 5.60 is perforated on the round outline and exhibits the reverse of
the 1 Leu coin (silver), issued in 1870, by the State Mint (Bucharest).
Together with this one, they also issued the obverse of the coin on a
drawing  the background of the sheet displaying elements of the first
Romanian coin (5 Lei), issued by the Ministry of Finance in 1877, and
printed in the workshops of the Bank of France in Paris. The same
background envisages some other bronze coins issued in 1867 together
with the silver coin of 50 bani issued in 1873. 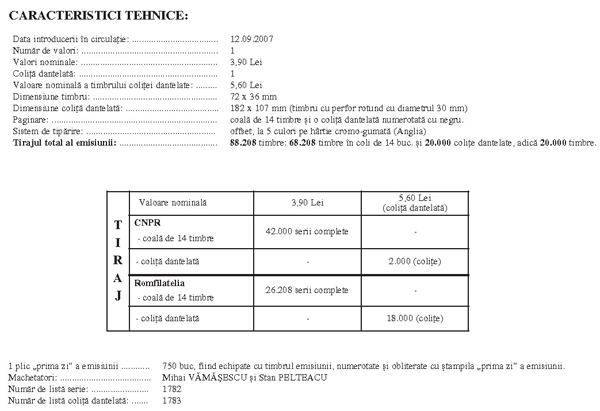