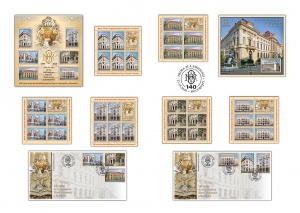 From the architectural point of view, the edifice is characterized by elements of exterior decoration specific to the Neoclassic style of Carol I’s epoch. The interior is organised around a central hallway situated on the axis of the main entrance, this manner of space organisation being a feature of the bank buildings at the end of the 19th century. The building in which Dolj regional branch carries out its activity, a component of the architectural patrimony of Craiova town, has regained its glory of yesteryear following the consolidation and restoration works taking place between 2015 and 2018.

In Iași the Branch of the Banca Națională a României started operating in March 1881. Operations took place in a building situated in Carol Street rented from Dimitrie Cozadiu. The building erected for Iași branch according to the blueprints of architect-engineer Nicolae Cerkez was destroyed by bombardments at the end of World War II. In order to provide its building of Iași with a proper space for the carrying out of its activity, in the spring of 1946 the Banca Națională a României management commissioned architects Radu Dudescu, Nicolae Crețoiu and Spiridon Spirescu, employees of BNR Architecture Department, to design the new building of the branch.

The blueprint of the building, built between 1923 and 1928, was made by architects George M. Cantacuzino and August Schmiedigen combining the grace and elegance of the architecture specific to Italian Renaissance with the most modern facilities necessary to the banking activity. The edifice overlooks two streets – 16 Lipscani and 7 Stavropoleos – and has two basements, a ground floor, five storeys and an attic.

Purchased in 1933 by Banca Națională a României, the Palace was turned into a work space for some of the departments belonging to the institution. After 1990, the edifice erected by Jean N. Chrissoveloni became the building of Bucharest Municipality Branch, known today as Bucharest regional Branch of BNR.   Between 1993 and 1998, Chrissoveloni Palace went through a vast process of restoration and consolidation under the coordination of architects Gabriel Tureanu, Constantin Rulea, Aurel Ioncică and Eliodor Popa. The fact that the project by which the palace regained its splendour and force, was awarded by the Romanian Union of Architects represents the recognition of the value thereof.

The imperforated souvenir sheet of the issue having the stamp with the face value of Lei 29, reproduces the image of the New Palace of the BNR in a graphic association that highlights the architecture of the Old Palace and the statuary group of the BNR founder Eugeniu Carada. The philatelic block brings together the six stamps of the issue (with images of the architecture of the territorial branches) in a graphic ensemble in which a decorative architectural element from the Marble Hall of the Old Palace is presented, along with the BNR logo and defining texts of the anniversary event.

The postage stamps issue “140 Years since the Establishment of Banca Națională a României” will be available on Wednesday, October 21st  2020, in Romfilatelia’s shops network in Bucharest, Bacau, Brasov, Cluj-Napoca, Iasi and Timisoara and online on https://romfilatelia.ro/store/. The postage stamps issue is completed by two “first day” covers, sheet of 32 stamps, minisheet of 5 stamps + 1 label, imperforated souvenir sheet and block of 6 different stamps. 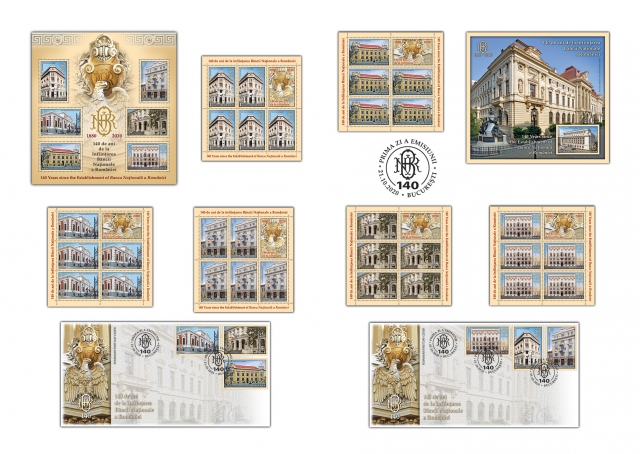 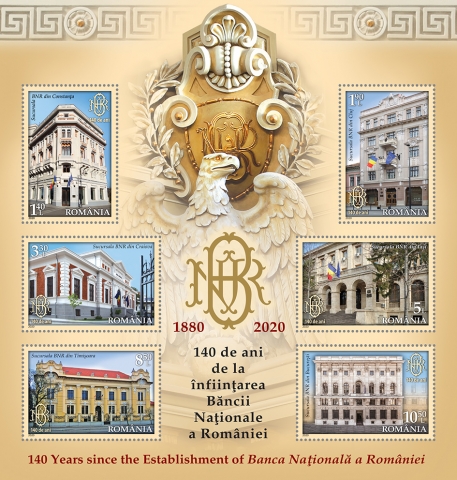 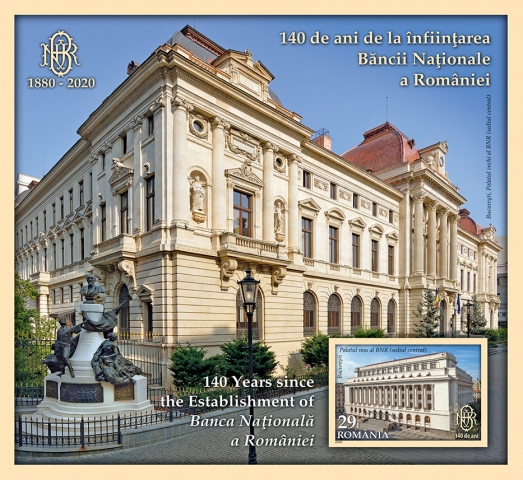 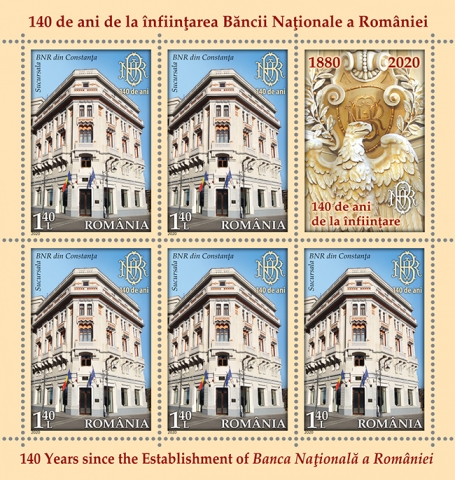 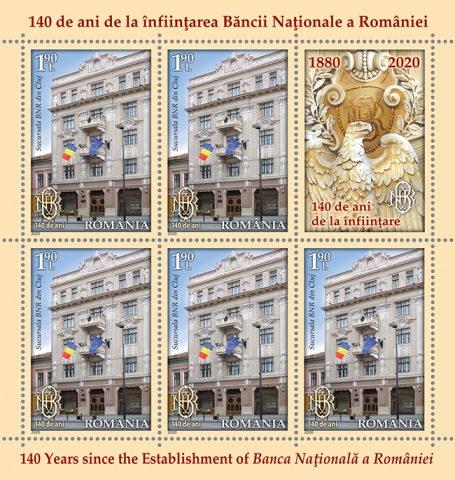 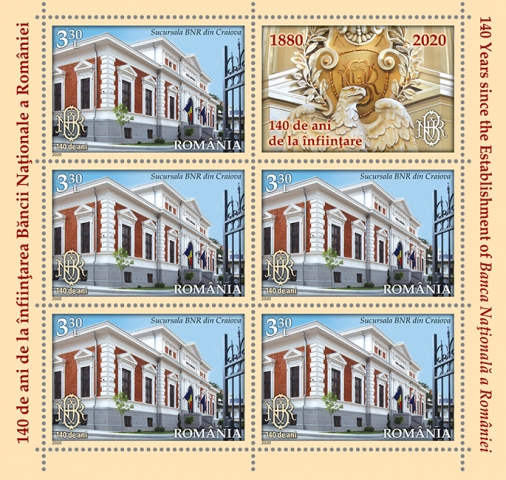 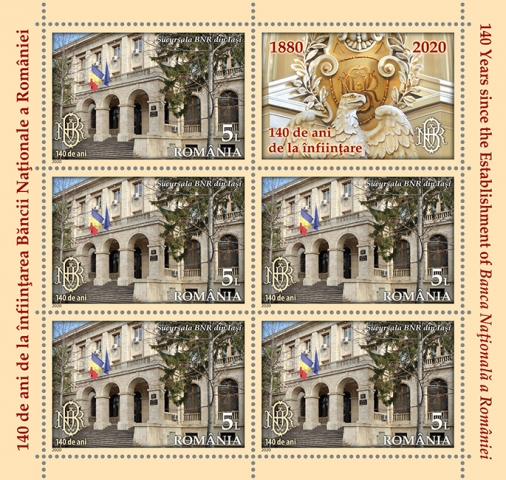 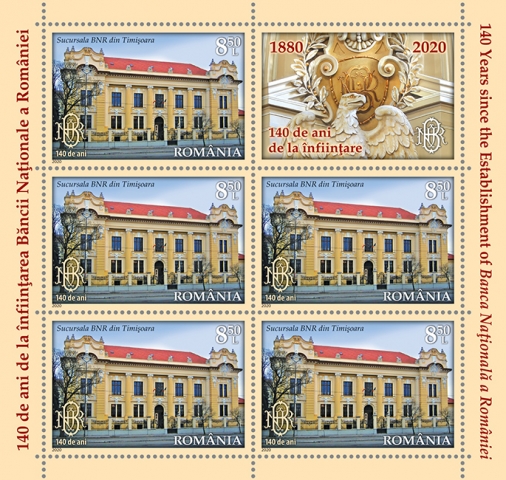 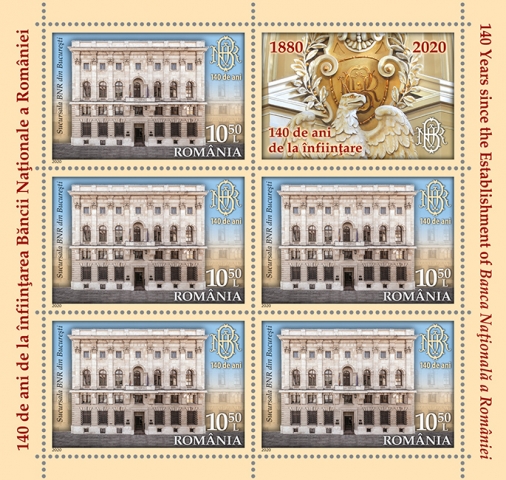 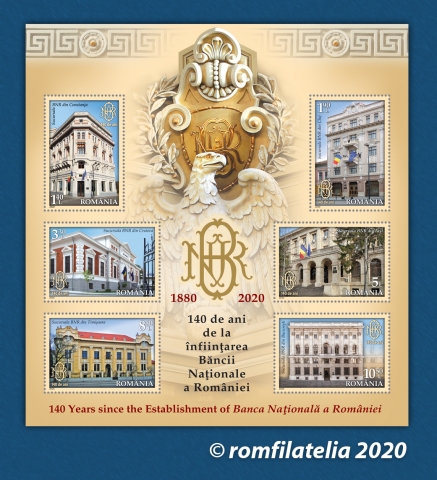 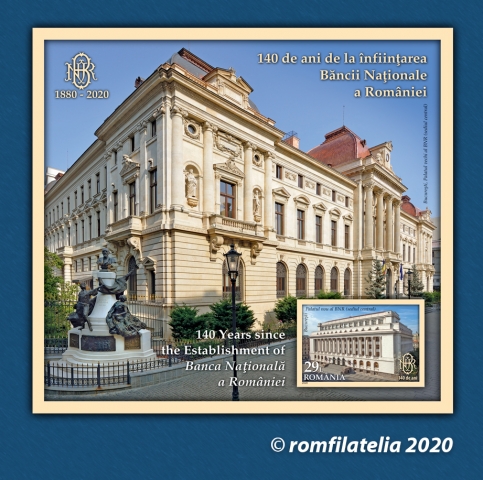 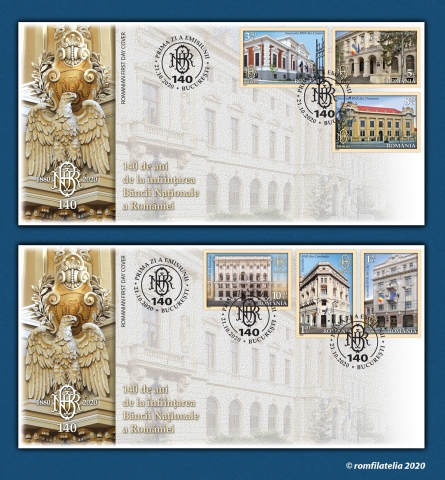 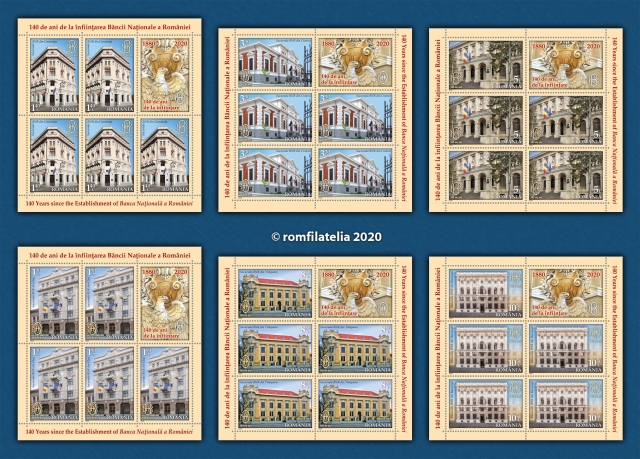 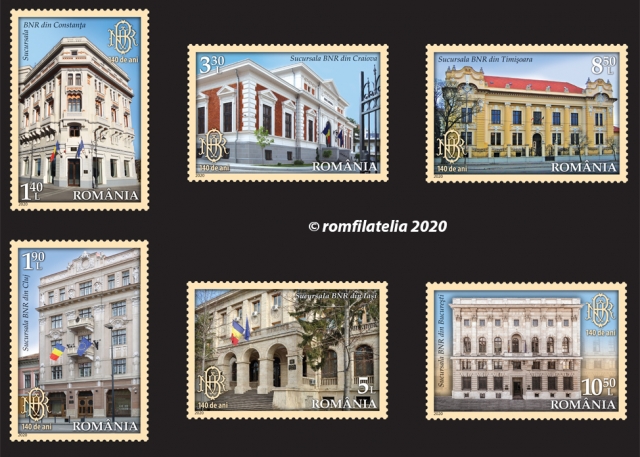 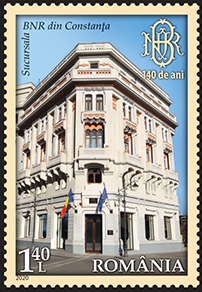 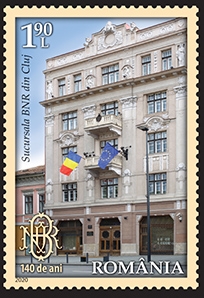 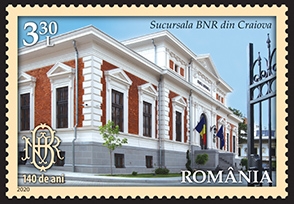 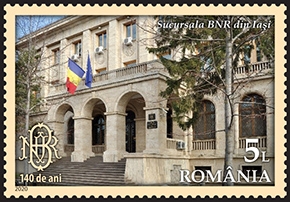 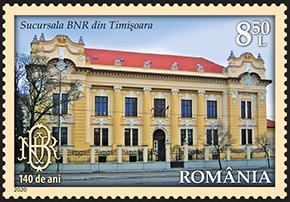 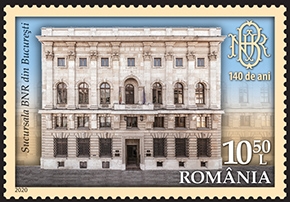