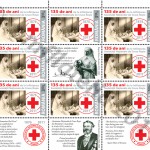 The Romanian Red Cross was established on the 4th of July 1876 and has been continuously operating since then, fulfilling its role as auxiliary to the public authority on humanitarian matters.

Among the signatories of the act of establishment of the Romanian Red Cross, there were important names of that time: Nicolae Kretzulescu, C. A. Rosetti, Ion Ghica, Dimitrie Sturdza, Gr. G. Cantacuzino and Dr. Carol Davila.

On the 20th of July 1876, the first Romanian Red Cross ambulance left in a humanitarian mission on the Serbian-Turkish battlefront on South of Danube. During this first mission of the Romanian Red Cross, the wounded were attended, regardless on which side they were.

In 1906 the “Ladies Red Cross Society in Romania” was established, the first elected president being Irina Campineanu.

In 1915, the General Assembly of the Romanian Red Cross approved the fusion of the two entities.

On this occasion Queen Marie, under whose patronage the Red Cross was at that time, sent the following message to the Romanians: “The Red Cross, everyone’s hope during peace and war, must not disappear. Everyone, from child to adult, let’s support it with piety, enthusiasm and perfect love”.

After Romania joining the Second World War, the Romanian Red Cross engaged all of its material and human resources to take care of the wounded, the injured, the prisoners and the refugees.

The democratisation process initiated in 1990 ensured the returning of the Romanian Red Cross to its original mission.

In 1995, Law no. 139 of the Romanian Red Cross National Society was adopted and promulgated. The law defines the organisation as a non-governmental, apolitical, autonomous, without patrimonial purpose legal entity of public law, auxiliary to the public authority, which conducts its humanitarian activity on the entire Romanian territory.

The Romanian Red Cross continues to conduct programmes according to its mission, based on a national network of 47 branches and over 10,000 active volunteers, who devote their time to assisting persons in difficulty.

By all its actions, the Romanian Red Cross conforms to its mission of assisting vulnerable persons in disaster and crisis situations. Through its programmes and activities for the benefit of the society, the Romanian Red Cross contributes to the prevention and relief of suffering in all its forms, protects health and life, promotes respect for human dignity, without any discrimination by reason of nationality, sex, religion, age, social or political affiliation.

We thank the Romanian Red Cross for the documentary support granted in the accomplishment of this postage stamps issue. 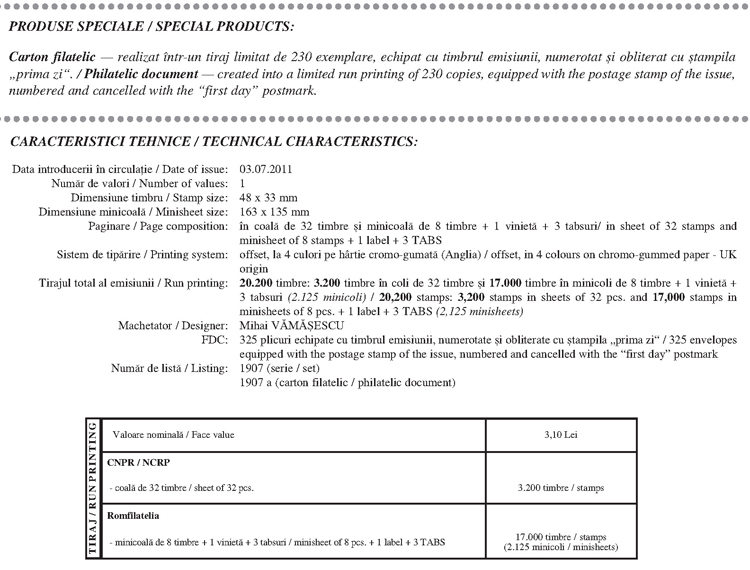