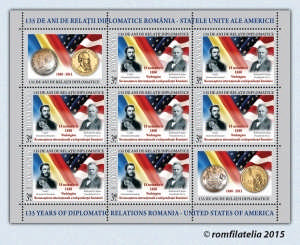 On the occasion of 135 years since the establishment of diplomatic relations between the two countries, Romfilatelia introduces into the postal and philatelic circuit the postage stamp issue 135 years of diplomatic relations Romania  United States of America. Romania and the United States laid the groundwork of bilateral relations during a time when both countries were undergoing an ample process of modernization of their values, under the leadership of two remarkable personalities, Prince Carol I of Hohenzollern-Sigmaringen and Rutheford B. Hayes (the 19th president of the United States of America), represented together on the stamp of the issue.

King Carol I was born on April 20th, 1839, at Sigmaringen, and was elected Ruler of the United Principalities on April 20th, 1866. The forefather of the Romanian Dynasty is also known as The Founder, for his contribution to the foundation of many public institutions, laws and public traditions (such as the day of May 10th as a national holiday). During his reign, in 1878, Romania gained its state independence and Dobrudja became a part of the national territory.

In 1881 Romania became a Kingdom, thus gaining its place among the European nations.

Born on October 4th, 1822, in Ohio, Rutherford B. Hayes was elected the 19th president of the United States in 1877. As a Harvard Law School graduate, before becoming president, he served in several distinguished positions in the military and legal systems of the United States. He exerted the function of Governor of the state of Ohio and was a member of the American Congress. Hayes was the first president to take the oath in the White House and during his mandate the historical stage named the Reconstruction came to an end, a period of reunification of the American states touched by tumult of the Civil War.

Romania, a country that had won its independence, found common ground with a country whose independence had been won a century earlier, and which was finishing a process of consolidation of modern governing values.

Romania and the United States of America have established diplomatic relations at the agency level on June 14th, 1880. On November 18th, 1880, in Washington, before President Rutherford B. Hayes, Romanias attainment of independence was notified via a special envoy of Prince Carol, Colonel Sergiu Voinescu. This was actually the first diplomatic mission of a Romanian to the USA, resulting in the recognition of Romanias independence on November 20th, 1880. Colonel Voinescu became the first Romanian diplomat officially received at the White House.

Since then, except for a brief interruption of relations in the early 40s, the relationship between the two countries has developed on all relevant planes.

Currently, the bilateral relations are stimulated by the interest
for the promotion of common democratic values, the development of political dialogue and of cooperation in the priority domains, by the common willingness to respond in an efficient manner to the risks and security challenges, as well as by the desire to consolidate the trans-Atlantic connections.

The privileged character of the relations between Romania and the USA and the dynamic, growing rhythm of the Strategic Partnership are illustrated by the consistent and substantial political dialogue, including that at a high level, which took place at the level of Administration representatives, as well as Congress, both in Bucharest and Washington D.C.

September 13th, 2011 marks the adoption at the highest level
of the Joint Declaration on Strategic Partnership for the XXI century between Romania and the United States of America, a bilateral political document consecrating the Strategic Partnership and prioritization of specific areas of cooperation: political, military and security, economic, scientific and technological, research, educational, cultural and human relations.

2015 marks 135 years since the initiation of diplomatic relations between the two countries, confirming Romanias most comprehensive special partnership to date. This partnership is laid at the foundation of further common progress in the political-military field, security, economic, as well as regarding education, science, culture, innovation and inter-human contacts, all of which are a priority on the bilateral agenda.

The labels of the 7 stamp minisheet illustrate images of the obverse and reverse of two collector coins issued by our country and the US: the image of a coin from 1880, with the value of lei 5, illustrating on the obverse the effigy of Prince Carol and on the reverse the Romanian emblem together with a collector coin issued by the US with the value of $ 1, depicting the image of the 19th President, Rutherford B. Hayes, and the years of his term in office, and on the reverse the Statue of Liberty’s image.

Romfilatelia thanks the Ministry of Foreign Affairs for the support granted in the creation of this postage stamp issue. 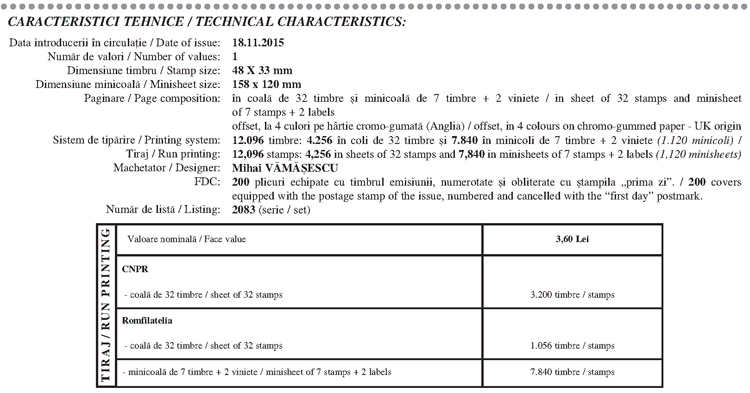