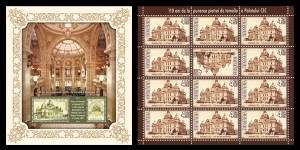 Romfilatelia, the specialized company in editing and trading Romanian
postage stamps, introduces into circulation the philatelic issue 110 YEARS
SINCE THE FOUNDANTION OF THE ROMANIAN SAVINGS BANK
PALACE.Romfilatelia, the specialized company in editing and trading Romanian
postage stamps, introduces into circulation the philatelic issue 110 YEARS
SINCE THE FOUNDANTION OF THE ROMANIAN SAVINGS BANK
PALACE.
On the place where the monumental building of the Romanian Savings Bank
Palace is built, the famous Saint John the Great Monastery stands, a 16th century
foundation of the Buzesti. Between 1702 and 1703, the ruler Constantin
Brancoveanu restored it, thus becoming the last founder of the monastic
institution. In time it was damaged and as a consequence, the monastery was
demolished at the end of the 19th century.
In the presence of the King Charles I and Queen Elizabeth, on June 8th 1897,
the foundation stone of the Palace was placed. Along with the royal family, the
members of the government lead by Dimitrie A. Sturza, Ion C. Bratianu, the
Minister of the Public Works Department, G. Cantacuzino, the minister of the
Finances Department and C.F. Robescu, the mayor of Bucharest, also
participated. The works, initiated from the spring of 1895, were finalized in 1900.
The project plans of the Palace bear the signature of the French architect Paul
Gottereau, graduate of the School of Arts in Paris, and the execution was
entrusted to the contractor Ion Socolescu.
With obvious specific elements of the late 19th century French academism, the
Romanian Savings Bank Palace shortly becomes the image with which the
institution will be identified. Well proportioned, the building has a symmetrical
facade in the middle of which the entrance is opened, highlighted by a monumental
arcade in the exact centre of the city, supported on both sides by two twin
columns, in composite style. The four corner volumes, decorated with frontons
and coats of arms, are covered with domes in Renaissance style. A bigger dome
covers the Central Hallway of the building, in which until 1999, Romanian Savings
Bank counters have operated. A special attention has been granted to the Council
Hall, located at the upper floor of the Palace, with a ceiling painted by the artist
Michel Simonidy, representing „Fortuna dividing her goods after obtaining the
Independence“. The canvas with the same theme has been exhibited at the
International Exhibition in Paris, in 1900, in the Romanian pavilion, obtaining the
first silver medal. On the side walls of the Council Hall there are four monumental
paintings, representing King Charles I, Queen Elizabeth, King Ferdinand I and
Queen Mary, works of art restored by the painter Valentin Tanase in 2005, after
the original paintings of Michel Simonidy and professor Costin Petrescu
(destroyed in 1948).
The judicious decoration of the facades and the balance of the volumes make
this Palace an interesting architectural monument of Bucharest, the old „Little
Paris“ from the East.
The postage stamps issue was performed with the help of the Romanian
Savings Bank. 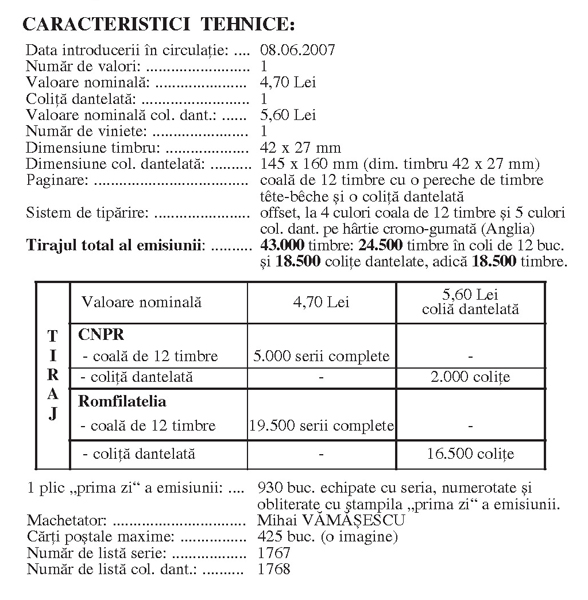