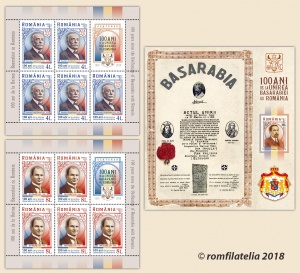 In the year of the Great Union Centenary, Romfilatelia celebrates the return of the Romanians living between the Prut and the Dniester rivers to the borders of the country, on March 27th, 1918, with the postage stamp issue 100 years since the Unification of Bessarabia with Romania. The stamps of the issue illustrate the portraits of three of the personalities who have contributed to the achievement of this national ideal. Thus, the stamp with the face value of Lei 4 shows the portrait of Alexandru Marghiloman, Prime Minister of Romania in March 1918. The portrait of Ion Inculet, president of the Chisinau Country Council, is reproduced on the stamp with the face value of Lei 8. The stamp of the perforated souvenir sheet of the postage stamp issue, with a face value of Lei 16, is illustrated with the portrait of Pantelimon Halippa, a fighter for the rights of the Romanians in the Tsarist Empire.

Bessarabia was part of historical Moldavia until 1812, when, in the context of the wars between the Russians and the Ottomans, the territory between Prut and Dniester rivers ended up under the rule of the Tsarist Empire. The Bessarabian Romanians were victims of a very tough process of denationalization – the use of the Romanian language in schools and administration was forbidden, and the cities were colonized with Russian population.

After the Russian Revolution of February 1917, the fate of the Romanians from the East of Prut River was again at the watershed of history. The various people of the Tsarist Empire fought for the formation of national states, and the Ukrainians claimed Bessarabia. Helped by the Romanian refugees from Austria-Hungary and by patriots from the Kingdom of Romania, the Bessarabians began to organize themselves politically and culturally, during 1917. In November 1917, a Congress of the Moldovan Soldiers proclaimed the political and administrative autonomy of Bessarabia, together with the organization of elections for a Country Council. 150 deputies representing all regions and nationalities were elected, 70% of whom were Romanians, and the rest were Ukrainians, Jews, Russians, Bulgarians, Germans, Gagauzes etc. Ion Inculet was elected the head of the Country Council, and, in December 1917, the deputies proclaimed the establishment of the Moldovan Democratic Republic, as a federal state of Russia.

But the new republic was weakest in terms of administration, and the retreating of the Russian and German troops spread chaos. In addition, Ukrainian nationalists sabotaged the Romanians’ attempts to self-determination. The Bessarabian front-ranks requested the help of the Romanian army, which crossed the Prut River and stabilized the order in the region. The Country Council members decided that the only solution to defend the national cause was the Union with Romania. The meeting on March 27th, 1918 certified the “forever and ever” return of Bessarabia to the mother country.

Remarkable personalities on both sides of the Prut River have contributed to this historic act.

Alexandru Marghiloman (January 27th, 1854 – May 10th, 1925) was a prominent politician for the conservative movement, before 1914. During the war, he remarked himself through his unabated opposition against any alliance with the Tsarist Empire. In March 1918, he was appointed Prime Minister, being involved in the debates for the Union, with the Bessarabian leaders. On March 27th, 1918, before the vote that consacrated the return of Bessarabia to the mother country, he went to Chisinau and held a speech to the Country Council.

Ion Inculet (April 5th, 1884 – November 18th, 1940) was a remarkable Bessarabian politician who, at the end of 1917, established himself as the leader of the national cause. He was elected President of the Country Council, being involved in negotiations with the Romanian authorities from Iasi, to set up a Union strategy.

Pantelimon Halippa (August 1st, 1883 – April 30th, 1979) distinguished himself since the beginning of the twentieth century as a fighter for the political and cultural rights of the Romanians living in the Tsarist Empire and, in 1906, due to his actions, was imprisoned. He voted for the Union of Bessarabia with Romania during the historic meeting of the Country Council, on March 27th, 1918, and, afterwards, he participated to the assemblies from Cernauti and Alba Iulia, which perfected the creation of Greater Romania.

Romfilatelia thanks the Academician Razvan Theodorescu, the National Archives of Romania, the Iasi Municipality, the Buzau Municipality, and to professor Corneliu Andonie, from the National Military Museum, for the documentary and photographic support granted for the achievement of this postage stamp issue. 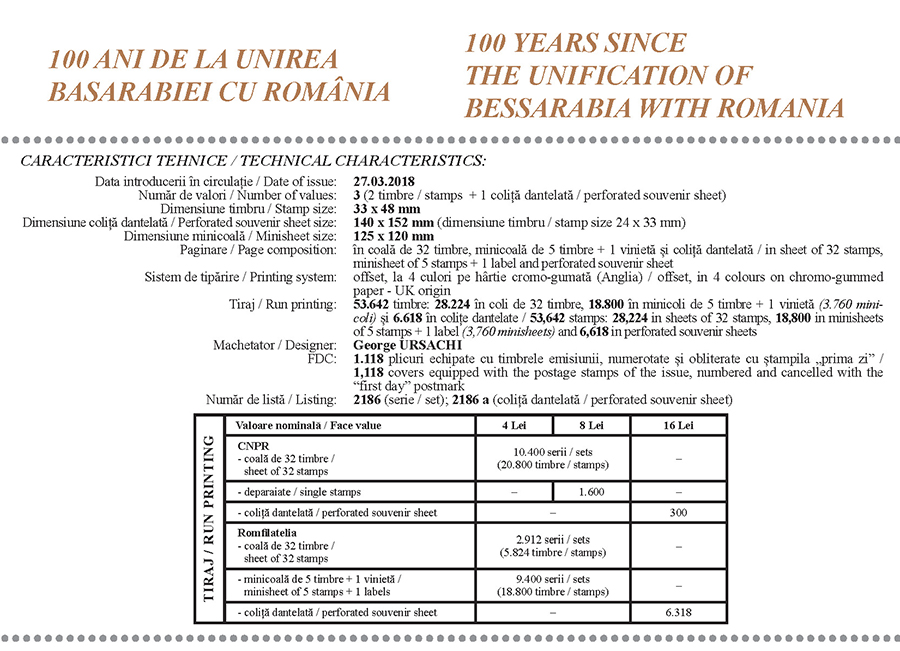