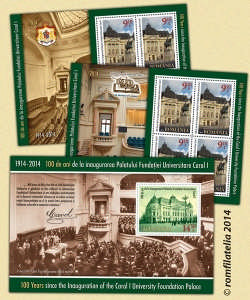 The Carol I University Foundation hosting over a century of history, was meant to become “an institution for the benefit of the youth from all the faculties in the country, whose aim will be to offer students a place of assembly, equipped with a library always open, where they can satisfy their love of study”, as King Carol I (the initiator of the project) wrote to Lascar Catargiu, his counselor, on May 3rd, 1891, the letter being considered a genuine founding act and a guide for those who would further lead the institution.

A century after the completion of the current building housing the Foundation, Romfilatelia dedicates the postage stamp issue 100 Years since the Inauguration of the Carol I University Foundation Palace to the period of history, education and culture.

The postage stamp with the face value of lei 9,10 illustrates the current façade of the “Carol I” Central University Library and the equestrian statue of the King.

The postage stamp of the souvenir sheet with the face value of lei 14.50 illustrates a vintage image of the Foundation’s Palace, and on the sleeve there is a photograph from the inauguration of the extended building, on May 9th 1914, in the Great Auditorium, in the presence of His Majesty King Carol I. Also reproduced, in the upper left corner of the sleeve, is a fragment from the founding document of the University Foundation, signed by King Carol I.

The cornerstone of the foundation was laid in 1891, the work sending two years later, and the inauguration taking place in 1895. The Foundation was aimed at strengthening “the brotherhood among the university’s youth” and “feeding the patriotic feeling which elevates its soul”, offering, for the 50 years to come, aid for printing valuable works and theses, scholarships for students and grants.

The Foundation managed to build an important collection, as both King Carol I and other personalities of that period contributed to it by donating works and especially money, strengthening thus the King´s objective professed to Emil Pangrati: “We do not know what the future will belike, or under which circumstances we will find ourselves. But my Foundation must provide for the wellbeing of the youth and the building of their future.”

The initial construction was the building on Boteanu Street, but a need to expand the building was observed and the current palace, with its unmistakable façade on Calea Victoriei, was built between 1911-1914, both works being carried out by French architect Paul Gottereau.

The 1944 bombings impacted the building whose repairs were coordinated by architect Alexandru Zamfiropol. The name of the institution was changed in 1948 by the new Communist authorities into The Central Library of the “C.I. Parhon” University of Bucharest.

In December 1989, an intense fire engulfed the building, destroying many manuscripts and valuable books. Over 500,000 volumes were lost (12,000 volumes of bibliophile books, among which 52 from Mihai Eminescu’s library), many ex-libris, old maps and about 3,700 manuscripts belonging to great personalities of Romanian culture among whom Mihai Eminescu, Titu Maiorescu, Ion Luca Caragiale, George Cosbuc, Lucian Blaga and Mircea Eliade.

In April 1990, under UNESCO’s auspices, the General Director Federico Mayor calls on all the governments, organizations, and political institutions to participate in the reconstruction and rebuilding of the library book fund.

This is how the reworking of the establishment started; behind it being raised a modern building that completed the old edifice. In the expansion project, the architectural complex of the library is made up of 3 buildings, integrating next to the palace of the Foundation, the building of the former Dacia-Romania Bank (also destroyed by fire in 1989), and the future construction of the Boema building.

Romfilatelia thanks the Carol I Central University Library for the documentary and photographic support granted in the accomplishment of this postage stamp issue.
Issue date: 2014-11-07 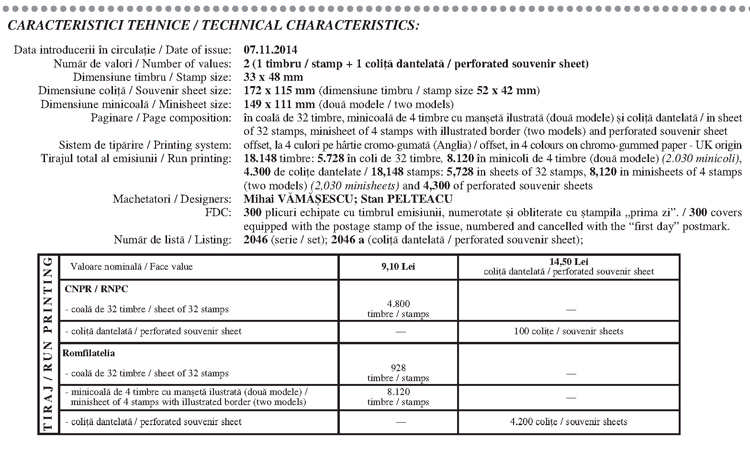