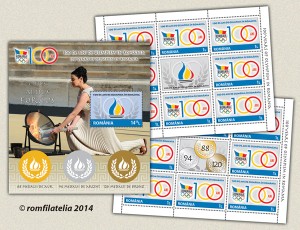 Olympism is a philosophy of life, exalting and combining in a balanced whole the qualities of body, will and mind. (Olympic Charter)

Pierre de Coubertin, the founding father of the modern Olympics, supported the value of sports as a vector of dialogue between communities, promoter of peace, and supporter of fair competition beyond any form of discrimination and cheating.

Romfilatelia honours the Romanian Olympic Movement by introducing into circulation the postage stamp issue: “100 Years of Olympism in Romania”, consisting of a postage stamp and a souvenir sheet marking a century since our country has joined the international Olympic movement. The postage stamp of the issue with the face value of lei 1.00 illustrates the ROCS anniversary logo. The stamp of the souvenir sheet with the face value of lei 14.50 depicts symbolically the event, and the graphic background of the souvenir sheet reproduces a suggestive image of the torch ignited during the official opening ceremony of the Games.

Over the years, the Olympic forum had 16 presidents, outstanding personalities of the moment, Lia Manoliu being the only woman who led the Olympic Committee in Romania, an appreciated presence both nationally and internationally. Lia Manoliu, a beautiful legend of Romanian sport, winner of the gold medal at the Summer Olympic Games in Mexico (1968) and bronze medal at the Summer Olympic Games in Rome (1960) and Tokyo (1964) in the discuss throw, participated in 6 consecutive editions of the Olympic Games(from Helsinki, 1952, to Munich, 1972), being the Guinness Book record setter for the longest continuous participation.

The first Romanian Olympic medal was won for Romania by the national rugby team, a bronze medal achieved in 1924 at the Summer Olympic Games in Paris.

Later on, at the Summer Olympic Games of 1952, Iosif Sarbu became the first Romanian Olympic champion in the shooting competition, while the first Romanian woman champion was Iolanda Balas in the high jump competition, at the Summer Olympic Games in Rome, in 1960. Iolanda Balas was also the first sportswoman in Romania who won the gold medal in two consecutive Olympic competitions (Rome, 1960, and Tokyo, 1964). At the Winter Olympic Games in Grenoble, in 1968, the bob team composed of Ion Panturu and Nicolae Neagoe won the bronze medal, being the only medal won by Romania in the history of winter sports.

Romanians keep alive in their memory the Olympic title won by Ivan Patzaichin in 1972, in Munich, when he finished the qualification series with a broken paddle. Present in five editions of the Olympic Games, he was a four time gold medallist, being called “the admiral of the Romanian fleet”.

Millions of Romanian sang together our country’s anthem when Nadia Comaneci, a 14-year old girl amazed the sports world with an extraordinary performance: the first 10 in the history of world gymnastics, which brought her the title of Olympic champion in Montreal, in 1976.

A model for all the gifted children wanting to reach performance is also Elisabeta Lipa, present in 6 consecutive competitions of the Olympic Games. The holder of 5 Olympic titles, Elisabeta Lipa was declared by the Canoeing International Federation as the “best rower of the 20th century”.

Romfilatelia thanks the Romanian Olympic and Sports Committee (ROSC) for the documentary and photographic support granted in the accomplishment of this postage stamp issue. 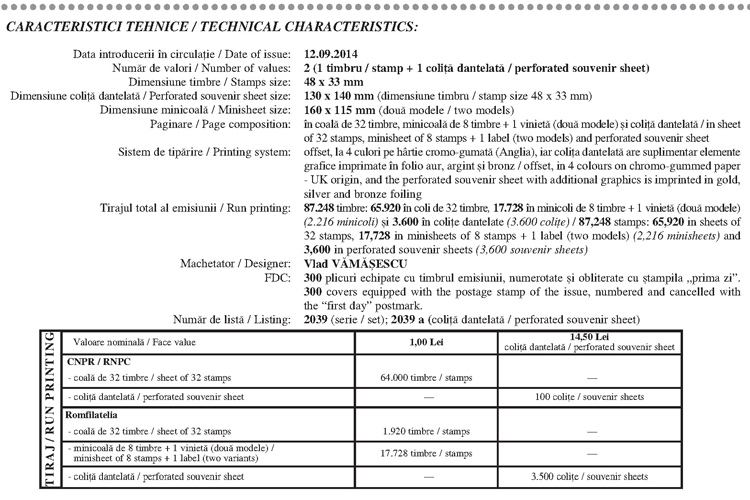