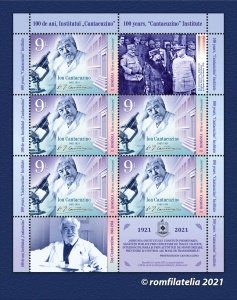 To mark a century of existence of the “Cantacuzino” National Medical-Military Research and Development Institute, an institution of strategic interest in the field of health insurance, Romfilatelia introduces into circulation on Friday, November 5, this year, the postage stamps issue 100 years,  “Cantacuzino” Institute.

The issue consists of a stamp with the face value of Lei 9, which illustrates the portrait of Professor Ion Cantacuzino, an aspect of his work, a microscope and a detail of the facade of the Cantacuzino Institute building.

The issue is completed by a First Day Cover, which contains the stamp and a label depicting Queen Marie of Romania, along with Professor Ion Cantacuzino and General Henri Berthelot, during a visit to a hospital in the year of the Great Union, 1918. The thematic illustration of the First Day Cover presents in facsimile the Decree signed by King Ferdinand I on April 1, 1921, by which the Institute of Serums and Vaccines “Dr. I. Cantacuzino” was founded.

The “Cantacuzino” National Medical-Military Research and Development Institute, an institution of strategic interest in the field of population health management, was established on April 1st, 1921, by High Decree issued by King Ferdinand I, under the name of “Dr. I. Cantacuzino” Institute of Serums and Vaccines.

The founder of the Institute, Professor Ion Cantacuzino, an exceptional figure in the history of Romania and world medical science, was one of the creators of the national school of microbiology, immunology and experimental medicine. He contributed to the modernization of Romania by participating in the elaboration of the Sanitary Law of 1910 and of the Constitution of 1923.

Particularly important is his participation, as a military physician, in the Second Balkan War, contributing to the elimination of the cholera outbreaks that had decimated the Romanian Army and the civilian population.

As Director General of the Sanitary, Civilian and Military Services, he coordinated the actions to combat exanthematous typhus and cholera in the First World War, receiving, in 1928, the rank of brigadier general, MD.

In diplomatic terms, he signed the Trianon Peace Treaty, an act that enshrines the Great Union of 1918.

For the importance of his scientific works, he was nominated for the Nobel Prize and elected a member of the Romanian Academy, receiving the title of Doctor Honoris Causa from several European academies and universities.

In its 100 years of existence, the scientific school that was formed within the Cantacuzino Institute concentrated research efforts in microbiology and experimental pathology, favouring their development in Romania, becoming one of the most important centres in the fields of biomedical sciences, epidemiology, comparative and infectious pathology, biochemistry, enzymology, immunology, etc.

In addition to the scientific activity, in the Institute, an important public health activity was carried out, concentrated in the National Reference Centres, as well as an educational activity, within the Department of Microbiology and Epidemiology of “Carol Davila” University of Medicine and Pharmacy.

Remarkable achievements of Romanian medicine are linked to the activity of the institute, such as: eradication of malaria and smallpox, creation of Polidin and the series of immunomodulators, polio, influenza, measles and rabies vaccines, elimination of polio and reduction, up to the elimination threshold, of the incidence of diseases such as: typhoid fever, diphtheria, influenza and tetanus.

On April 1st, 2021, the “Cantacuzino” National Medical-Military Research and Development Institute was decorated, on the occasion of the 100th anniversary of its establishment, for the important results obtained in the field of public health, through high quality interdisciplinary research and activities for the prevention and control of communicable diseases, with the Order of “Sanitary Merit” in the rank of Grand Officer.

Romfilatelia thanks to the representatives of the “Cantacuzino” National Medical-Military Research and Development Institute for the documentary support granted in the development of this postage stamps issue. 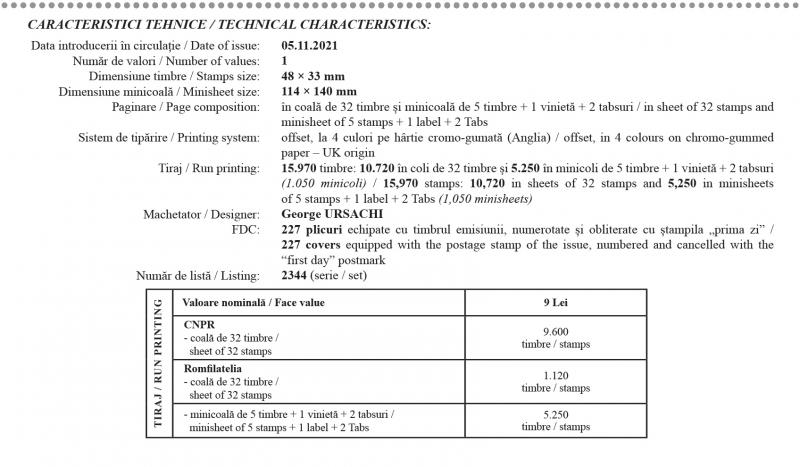