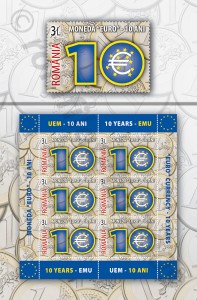 On the occasion of the celebration of one decade since the euro currency appearance on
the international monetary market, Romfilatelia introduces into circulation the postage stamps issue “10 years since the launching of the euro currency”. This philatelic issue is accompanied, as a première for Romania, by a numismatic issue made by the  National Bank of Romania, dedicated to the celebration of the same event.

We bring here special thanks to the National Bank of Romania for the documentary assistance.