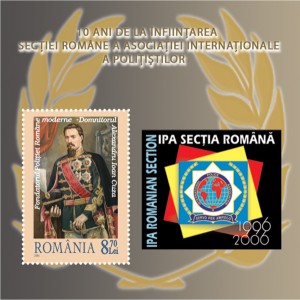 Its founder, Arthur Troop, was a police sergeant who worked within the British Police, in a little town called Lincolnshire. After the Second World War, he thought to found an association, based on friendship and mutual aid relationships between policemen from all over the world. The policemen from Great Britain, Denmark, Norway, Sweden, but also from some African countries were happy about the idea of founding an international police association, with national divisions, with the same logo and the same status.
Consequently, on the 1st of January 1950, the I.P.A. (International Police Association) – Great Britain Division was founded, and its first member was, in fact, its very founder – Arthur Troop. The first motto of the association was “Service through friendship”, which best expressed the purpose and aims of the association, but which could only be understood by speakers of the English language. To overcome this obstacle, they called an Esperanto expert, Bob Hamilton. He translated the motto into this language and, ever since, “SERVO PER AMIKECO” has been the official motto of the association. On this occasion, it was decided that all members should pay a subscription fee, that the own magazine of the association should be printed, and that a suggestive logo should be chosen.
The I.P.A. logo, conceived by Arthur Troop himself and touched up by a specialized designer, reunites familiar symbols: the star on the policeman’s cap, the Earth, the laurels as a symbol of peace together with the words “Servo per amikeco”. A year later, the emergence of the status of the association added to this action.
In 1955 – between the 16th and the 17th of September – took place, in Paris, in the North Railway Station building, the first International Congress of the I.P.A.. The first general secretary of the association was Arthur Troop who maintained this position until 1967, when he withdrew, remaining just a founding member.
Open to policemen from all over the world, regardless of their race, rank, gender, religion and language, the International Police Association has become the most important international organization of profile in the world, having national divisions in more than 80 countries. The purposes and aims of this association are the following:
– favor personal and family meetings, by means of visits
or correspondence, which are meant to entail the installation, maintaining and development of a friendship and cooperation climate between all I.P.A. members;
– organize exchanges of experience and information meant to fight against criminality and delinquency;
– promote the organization of conferences, seminars, work sessions on specific themes to police activities;
– promote respect for the law, order and human rights;
– promote honesty and fair-play, mutual respect and mutual aid;
– permanently raise the prestige of police and improve relationships between the members of the association and the civil society.
The International Police Association – Romanian Division is a non-profit governmental organization that operates according to the provisions of the I.P.A. International Statute and of the Romanian legislation. The organization is based on the free association and is made up of active or reserve officers of the Ministry of Administration and Interior, policemen, gendarmes, but also students and teachers from the Police Academy. The Romanian Division is organized according to the principle of territoriality, i.e. a central organization, with registered headquarters in Bucharest and regions attached to the County Police Inspectorates and other divisions of the Ministry of Administration and Interior.

The perforated miniature sheet of the issue includes the postage stamp that presents the ruler Alexandru Ioan Cuza, in whose time emerged the first organized forms of the Romanian police, next to the international logo of the I.P.A. and includes the words I.P.A. Romanian Division, as well as the years 1996 – 2006.
The face value of the postage stamp is of RON 8.70.