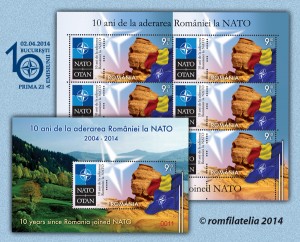 The historic decision adopted at NATO’s Prague Summit in 2002 started a new era for Romania, which was invited to start accession talks with the North Atlantic Alliance.

Romaniawas granted Allied status in 2004. The instrument of accession to the North Atlantic Treaty was deposited on 29 March 2004, in Washington, and then, on 2 April 2004, in Brussels, the flag of Romania was hoisted at the NATO Headquarters, a ceremony which, along with an Allied foreign ministers meeting, symbolically marked Romania’s accession to NATO.

One decade later, Romania’s profile in NATO speaks of continuity, coherence and dynamism in supporting the country’s security interests. Romaniais a respected Ally, its contributions in areas of major importance for the Euro-Atlantic security being quite substantial. Romania has been actively involved in providing arguments for NATO decisions of a civilian and military nature, throughout the process of organisational and operational maturation. The fact that Romania hosted NATO’s Summit in 2008 came as a confirmation of our country’s efforts to become a net security provider.

Romania has been present alongside the Allies in NATO missions and operations aimed at promoting stability and security worldwide. NATO officials and the leaders of the Euro-Atlantic community have noted the participation of Romanian military and experts, across the years, for their high-level training and professionalism.

Romania has contributed to Afghanistan’s stabilization since 2002, when it joined the coalition headed by the USA, the goal of which was to restore freedom in Afghanistan and eradicate terrorism. When NATO took over the International Security Assistance Force (ISAF), in 2003, Romania gradually increased its contribution to the Allied efforts, being one of the states to have significantly contributed with troops, while maintaining its participation in the US-led Operation Enduring Freedom. In the over 13 years of efforts for the stabilization and reconstruction of Afghanistan, 21 Romanian soldiers sacrificed their lives. Romania has also been involved in training programmes, providing military instructors and gendarmes for the NATO Training Mission in Afghanistan (NTM-A).

Romania has constantly made a point of the interest for the Western Balkans. In this spirit, Romania has joined the efforts to stabilize the region in the context of NATO’s Kosovo Force (KFOR), created in 1999.

Romania has backed, both politically and operationally, the activity of the NATO Training Mission for the Iraqi security forces (NTM-I) and later, the activity of the NATO Transition Cell. Diplomatic personnel was seconded to the NTM-I and donations were made to the end of ensuring security during the elections inIraq, and Iraqi officers were trained within specialized Romanian structures.

Romania participated with a naval unit in Operation Unified Protector (OUP) inLibya, and placed general staff officers at the disposal of the Allied command throughout the operation.

Our country participated in NATO efforts to fight terrorism, such actions being aimed at enhancing the capacity of reaction and the detailed knowledge of the terrorist phenomenon and threats, as well as at developing adequate response methods.

Moreover, during the past decade, Romania has upheld the importance of the Alliance maintaining its attention on the partnerships in the Eastern neighbourhood of NATO, with a focus on the wider Black Sea region and the Western Balkans.

Romania has helped consolidate NATO partnerships based on active involvement in the network of Contact Point Embassies (CPE) in partner countries. Since 2005 to date, Romania has held CPE mandates in the Republic of Moldavia, Azerbaijan and Georgia. Today,Romania can consider itself an experienced Ally in this field, a fact that allows it to fulfil CPE tasks in two partner states, Georgia and Azerbaijan, at the same time, during 2013 and 2014.

Once an aspirant state itself, today’s Romania remains an active supporter of NATO’s open-door policy, being ready to share its experience with the aspirant countries that can fulfil the goals required in order to join the community of principles and values which is the North Atlantic Alliance. Romania has constantly favoured the deepening of NATO cooperation and the process of Euro-Atlantic integration of the states located in the Western Balkans and the South Caucasus, an area on the borders of Romania and of the Alliance.

Romania has fully assumed the New Strategic Concept adopted at NATO’s Lisbon Summit (19-20 November 2010), a concept to the development of which our country has actually contributed in a direct manner.

The areas of special interest to Romania, such as missile defence, energy security, partnerships, and NATO’s open-door policy have been promoted adequately among the NATO priorities.

Developing a capacity to defend the populations and territories of the Allies against ballistic missile attacks is a key element in ensuring collective security. Romania’s participation in developing the European component of the US missile defence system is a success that helps strengthen NATO confidence in Romania as a trusted Ally. The bilateral project developed alongside the USA represents a valuable contribution to developing the NATO ballistic missile defence system. When it becomes operational, by 2015, the Missile Defence Facility at the Deveselu Military Base in Romania will make possible the extension of the protection against ballistic missile threats against the Allied territory inEurope.

The exclusively defensive nature of the missile defence system and the fact that its utilization observes the United Nations Charter are stipulated explicitly in the Romanian-American Agreement on Deployment of the Ballistic Missile Defence System of the USA in Romania, signed on 13 September 2011.

This mirrors the will of Romania and the USA to help ensure the legitimate Allied collective defence, for the greater goal of maintaining international peace and security.

Supporting an ambitious role to be assumed by NATO in the area of energy security, Romania has been pursuing to promote its interests in this respect, maintaining a close relationship with the partner states, notably those of the Black Sea and the Caspian Sea region.

Romania has been interested in an enhanced framework for NATO action against cyber threats, being actively involved in Allied projects devoted to developing the relevant capabilities.

Finally, attesting to Romania’s important contribution is also the expertise of the Romanian officials and officers working for the International Secretariat of NATO.

Today, NATO is the main security provider for Romania and offers the most important framework for transatlantic dialogue and cooperation in the field of security. Now, as we mark 10 years since our accession, there is no doubt we are witnessing the attainment of the highest degree of security in Romania’s contemporary history, which directly benefits the safety of Romanian citizens.

We thank the management of the Ministry of Foreign Affairs for support granted in the accomplishment of this postage stamps issue. 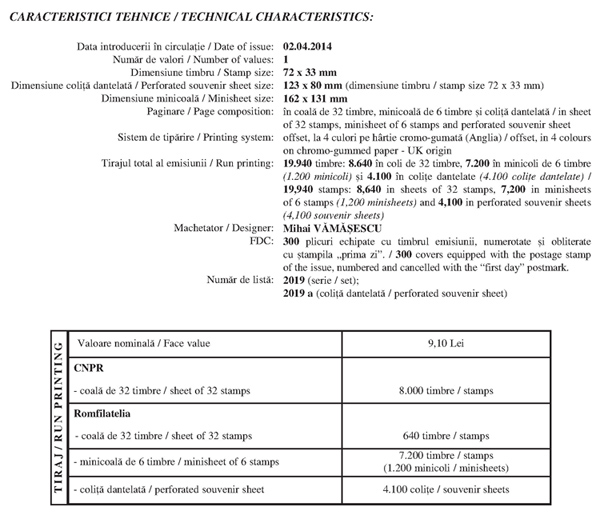