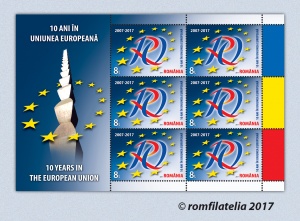 In 2017, Romania marks the anniversary of 10 years since Romania joined the European Union, on January 1st, 2007, a historical monument inscribed in the history of contemporary Romania.

The European Union presents itself as an economical and political alliance unique in the world, having in its structure 28 member states.

A symbol of unity and European cooperation, the Union was created on the political determination to build a European future which would end the great human and economic losses generated by the First and Second World Wars. The necessity of forming a European Union (although at the time that name wasn’t yet in use) was a result of the clearly expressed will to rebuild Europe and to ensure conditions of durable peace and security on the European continent.  This conviction eventually led to the formation of the European Coal and Steel Community by Germany, France, Italy and the Benelux countries (Belgium, Luxembourg and the Netherlands) by signing, in April 1951, the Treaty of Paris, which entered into force in July 1952. The first full customs union, originally referred to as the European Economic Community (informally as the Common Market) was created by the Treaty of Rome in 1957 and implemented on January 1st, 1958. The latter was transformed into the European Community, which became what we know now as the European Union. Finalizing the E.U. status was made through ratification by all member states of the European Community Treaty of Maastricht (Netherlands), on February 7th, 1992.

Therefore, the European Union is the result of a cooperative process that began in 1951, between six European countries and developed, over the next 50 years, through the next five rounds of expansion.

Romania was the first country in Central and Eastern Europe that had official relations with the European Community, through an understanding, from January 1974, which included Romania in the Community Generalized System of Preferences, followed by a series of agreements with the EEC for trade facilitation. In 1980, Romania proceeded to a de facto recognition of the European Economic Community by signing bilateral agreements, including the Agreement on establishment of the Romania – CEE Joint Commission.  In March, 1990, Romania was the first country of the communist block to establish official relations with the European Community. Another reference point in the relations is the signing, in 1993, of an association agreement, also known as a European Agreement, which entered into force in 1995. That same year, Romania put forth its official request to join the European Union, together with the National Strategy for the Accession Preparation, a document signed in Snagov by all the parliamentary political parties, which set forth the procedural stages and actions that would be taken to bring us closer to the European structures.  Romania wrapped up the accession negotiations during the EU winter Summit in Brussels, in December 2004. The Accession Treaty was signed on April 25th, 2005, in Luxembourg, our country becoming a Member State of the European Union, on January 1st, 2007.  The most eloquent expression of these successes are the huge transformations in our country engaged by the reform processes, by society’s modernization and the economic development, all with a positive impact on every citizen’s quality of life.  The increase in trade with European partners, the boosting of foreign direct investment and the stimulation of entrepreneurship in a highly competitive environment were all visible for Romania, as they were for each new member state. Another example of a tangible benefit, impacting the quality of life of each citizen, derives from the principle of free movement (of goods, services, capital and persons) in the single market.  Basically, the quality of E.U. membership has meant and continues to mean, besides the advantages of membership, an ongoing process of adjustment and maturation, learning and deepening of the rules and principles governing the Union today. Ten years after Romania’s accession to the European Union, it is a state with a solid European profile, which fully supports the consolidation of the European project and the deepening of integration.

Romfilatelia thanks the Ministry of Foreign Affairs and logo designer Mugur Mihai for their documentary support granted in the creation of this postage stamp issue. 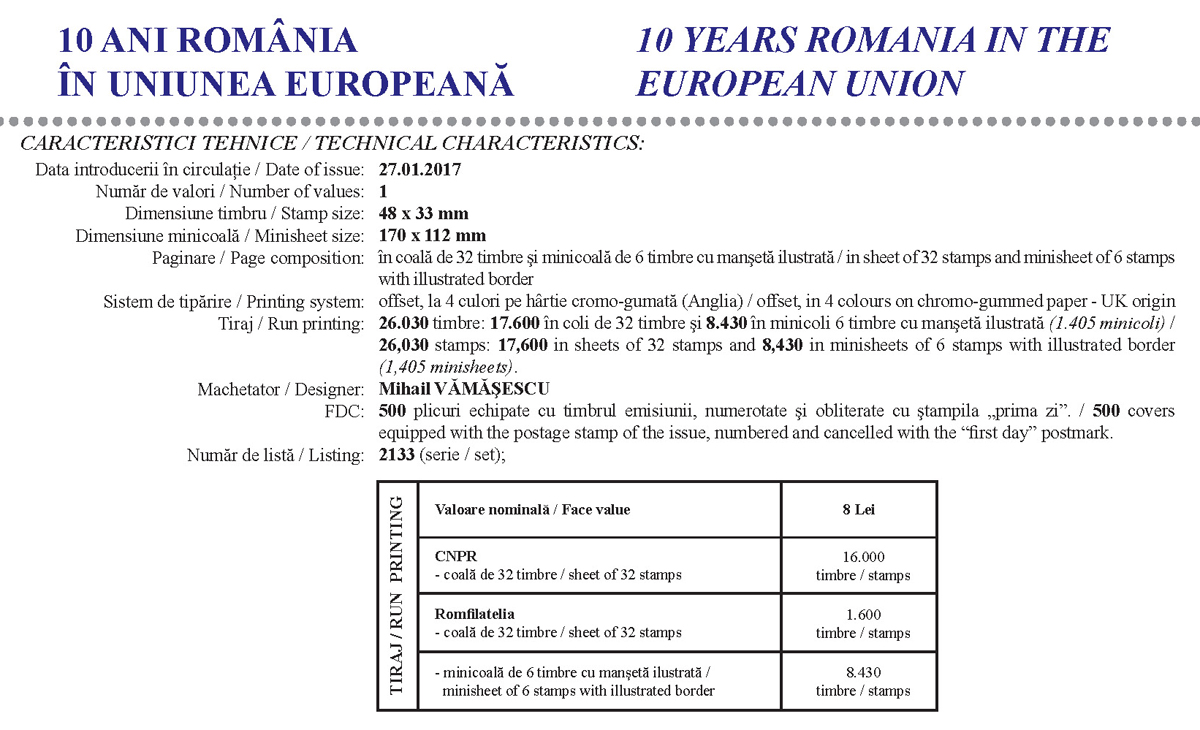